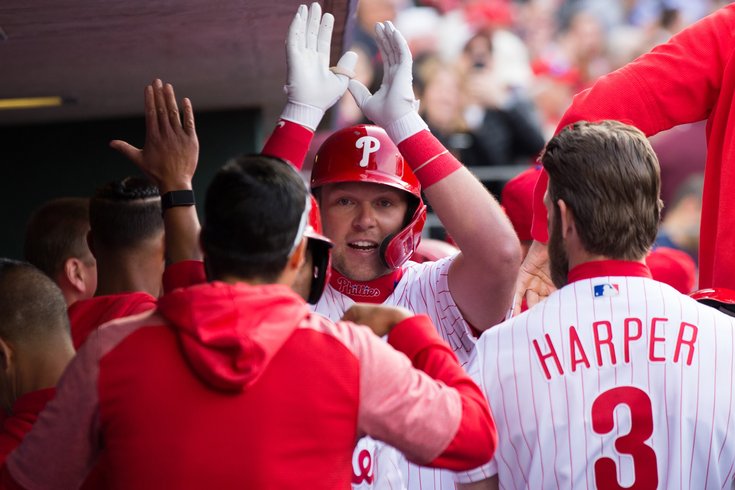 Philadelphia Phillies left fielder Rhys Hoskins (17) celebrates in the dugout after hitting a grand slam during the seventh inning against the Atlanta Braves.

Rhys Hoskins hit a grand slam and Aaron Nola pitched six quality innings. This sounds like the lead from a Phillies game last season, but the revamped 2019 team, in its debut, relied heavily on returning fan favorites en route to a 10-4 triumph over Atlanta Thursday.

With all the headlines being made by the Phillies huge offseason acquisitions, it was core from 2018 who made the difference in this one. The line up is deep — super deep — with almost a second top of the order in the 6-7 and 8 spots in the lineup, spots that were pivotal in the victory.

Fans are feeling pretty good as things just get started in the most anticipated Phillies season in a decade. Here's a look at the good, bad and ugly we saw in a memorable Opening Day at Citizens Bank Park.

• Let's start with Aaron Nola. He came out guns blazing with a 1-2-3 inning, looking a bit hungry after falling just short of the 2018 Cy Young award.

However an inning later, Nola couldn't find the strike zone, walking three Braves and taking 29 pitches to get through the stanza — allowing the Braves to plate a run after Ronald Acuna rounded third after walking and stealing a bag.

He had another 1-2-3 outburst in the fourth looking back to his usual self. In all, Nola wrung up eight and allowed just the lone run. He got plenty of run support to earn 'W' No. 1.

• There is power up and down this Phillies line up. Andrew McCutchen, on a 2-0 pitch, blasted his 13th career lead off home run to get Philly ahead 1-0 early.

The team hit three home runs — the first three of many — in a ballpark that should feel right at home for everyone that yields a bat in South Philly.

• I have to say I absolutely love Jean Segura's hustle, turning a close play at first in the bottom of the fourth into a base hit and nabbing second on an error. He over-ran the bag, looked anxious to scurry back to first but then saw that Freddie Freeman didn't have the ball and put on the afterburners to safely wind up on second. A passed ball moved Segura to third and with Harper due up behind him, RBI chances like this one are why the Phils made the trade for the All-Star shortstop.

Harper and Hoskins each struck out back to back but a two-out J.T. Realmuto base on balls allowed Odubel Herrera and Cesar Hernandez to hit back to back RBI singles to give Philly a 3-1 lead.

Segura actually did it again in the seventh, running hard on an infield chopper and getting to second on the overthrow. With McCutchen already on first, an intentional walk to Harper set up a bases loaded situation for Hoskins.

Yes, the Braves intentionally walked Harper to load the bases against Hoskins. Then this happened:

• It was another returning favorite, Maikel Franco, who added some cushion to the Phillies lead as a three-run two-out blast to left field scored Hoskins and Hernandez to up things to 6-1 Philadelphia in the sixth.

The Phillies eight hitter can do THIS. pic.twitter.com/S6zMX4ANXo

When a lineup contains last year's top three hitters in the final three spots in the order, you know this line up is stacked. On days like this, with the newcomers (at the top of the order) more or less quiet, having potent bats in the bottom positions can be the difference between playoffs and an early winter. Every starting position player reached base in the win Thursday.

• It would be remiss if we didn't at least make a passing reference to the pomp and circumstance that surrounds any opening day. This particular one had a little extra juice:

• In Phillies fans, Harper has the community he's always wanted. It was as if the Beatles were in right field all game long. Here's what took place in the first frame when he warmed up in right:

• Realmuto threw out Freeman at second on a steal attempt, threading the ball on one hop right into Segura's glove. Having Realmuto's arm behind home plate will be a big deterrent (and defensive weapon) this season.

• The Phillies were historically bad defensively last season. Not only did the defense play a clean game, but Pat Neshek, in relief in the ninth, pulled off this ridiculous double play:

• Harper went 0-for-3 Thursday and with an off-day coming Friday get ready for some Harper second guessing. The stadium had a ridiculous amount of attentiveness during each of his at bats, with a wholly unusual deafening silence in between pitches when a pin dropping could be heard. The fans were willing him to get on base some how, some way as they booed every called strike. The $330 million man struck out twice, grounded out and was intentionally walked.

• Following Cutch's blast, nine straight Phillies were retired as tallied four strikeouts over the three-inning span. The Phillies didn't seem to be putting up any kind of fight with their bats in the middle innings, with few deep counts or foul balls and no base-runners leading into Segura's single in the fourth.

In all the Phils struck out nine times and as everyone knows, the more balls put into play the more chances for the offense to operate. With record strikeout marks being eclipsed year after year, the Phils lineup is compiled with a ton of talent but will also be laden with a ton of strikeouts.

• In a relatively short outing during which Nola clearly was not entirely in midseason form, the ace walked five batters. He had 58 in all of 2018, averaging 2.5 per nine innings. That paired with eight strikeouts led to an unusual showing for Nola — just two hits allowed but only six innings pitched due to a high pitch count (he had 99).

• David Robertson gave up three straight hits in his Phillies' debut in the eighth inning. He had a sizable seven-run lead when he took the mound, so fans can hope a lack of urgency or perhaps some rust was behind an ugly outing for the Phils' pen.

• Leading 6-1, the Phillies needed seven outs to pull off an impressive win on Opening Day. And then pinch hitter Matt Joyce hit a two-run shot with two out in the seventh, pulling the Braves within three and making it a game again. Hector Neris was the guilty party — showing the team still has question marks out of the pen to sort out.

Granted, allowing a pitcher with home run issues in 2018 and a bad spring training to pitch with a five-run lead isn't the worst thing manager Gabe Kapler has ever done, but if Neris can't sort himself out soon there are plenty of other options ready to take his place on the roster.