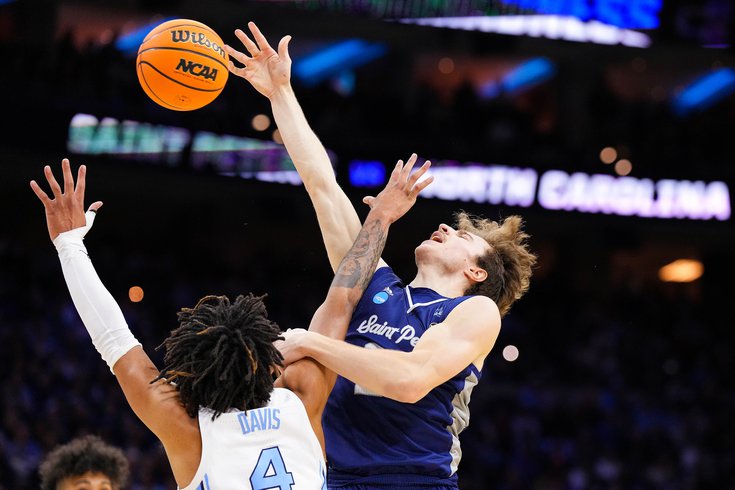 The Peacocks' season ended Sunday, but their legend will live on...

The simple fact that I am writing, and you are reading an instant analysis article about Saint Peter's University after their bout with North Carolina in the Elite Eight is just an astoundingly bizarre reality that highlights just how ridiculous sports can be sometimes.

With the Peacocks' Cinderella story taking them to Philadelphia as the lowest seed ever to advance to this stage of March Madness, we wanted to do this soon-to-be legendary team justice by giving their 69-49 defeat at the Wells Fargo Center the full good, bad and ugly treatment.

So before attention shifts to the impending UNC-Duke and Villanova-Kansas Blue Blood battles in New Orleans next weekend, here's a look at what we saw from St. Peter's Sunday night:

• After three incredible upsets the Peacocks fell to earth, resembling a 15-seed for the first time this tournament. Down by as many as 21 in the first half, they didn't quit.

A nice little 11-4 run midway through the second got some life back into the crowd and was a sign of the don't quit attitude the team has flashed all season.

This thing was pretty much over after the second TV timeout, but the Saint Peter's faithful stuck around and the team hustled up and down the court despite being outworked by a superior team. They were in the zone for 120 minutes this postseason, but the last 40 they were back on planet earth.

• Saint Peter's head coach Shaheen Holloway really seems to be a defensive mastermind and he has every player on the floor using their limbs to effect passing lanes and jar basketballs loose left and right. Even with their offense sputtering in the early going, like a pitcher tossing a gem with a lineup that can't get a hit, their defense kept UNC from breaking things open and is something they can really hang their hat on.

Eventually the floodgates opened, which can sometimes happen when your offense is anemic and nothing is working. Still, future upset-minded double digit NCAA tournament teams will be trying to take a page from Holloway's book — the way to slay Goliath is on defense. Maybe all the best athletes and most talented basketball players opt to go to traditional powers, but effort, sound fundamentals and teamwork are attributes that can be learned. At their best, the Peacocks demonstrated all three.

• I wanted to wrap up this section by mentioning that there is something special about the NCAA Tournament that, even when I don't really follow regular season hoops action, always makes me fall in love with the event and with sports in general again.

How is it even possible that Saint Peter's is competing for the same championship as teams like UNC, Duke and Kansas? That they beat Kentucky and Purdue in the sport's biggest stage is a small miracle. With a sports landscape that sees NBA talent going one-and-done or immediately to the G-League, there is a much more diluted pool of talent in college basketball and we are reaping the reward right now.

St. Peter's first half in one play pic.twitter.com/7QaQAJiSdK

• The Peacocks' offense was dreadful out of the gate, with the team settling for contested three-pointers or end of the shot clock attempts from mid range, and not surprisingly they found themselves behind 9-0 in the early going, missing their first six shots from the field. Mercifully they got on the board more than four minutes into the game when Hassan Drame hit a three pointer.

It's hard to be worse than 3-for-19 to start a game from the field. Whether it's Carolina's size, their experience level or that Saint Peter's was hesitant to fire when open, the Peacocks dug a hole for themselves which is a tough place for an underdog to be. They made less than a quarter of their tries and had zero touch around the rim, hearing footsteps or getting spooked layup after layup.

• Perhaps some of what fueled the Peacock's run early in the tournament was a combination of their relative anonymity as well as their continued underestimation. Heck, even their own student body members didn't pick them to win in their bracket pools.

Credit is due to Hubert Davis and the UNC coaching staff for having a gameplan to suffocate Saint Peter's and force them to play from behind, and to find themselves chasing the Tar Heels all across the court. The more the Peacocks won, the more they got a target on their backs and the more game tape opponents could study in preparation.

• Is UNC a legit title contender? They have speed and basketball IQ and Brady Manek looked like a superstar stretch-five drilling threes late in the shot clock and holding court down low. He would tally 19 points on the night with four from long range. Another shoutout to the Heels' Armando Bacot, who nabbed 22 boards (in addition to 18 points) as his team dominated on the glass all night.

After getting the best of Duke in Coach K's final home game a few weeks ago, their duel in the later of the Final Four matchups will be can't miss next Saturday. It's worth noting that the Tar Heels cut down the nets in this same building in 2016 when they won the Eastern Regional and eventually lost in epic fashion to Villanova in that year's title game.

• This team has become America's darling, with a student body the same size as a high school in Texas. They'll be known by college basketball fans forever. And their performance was as bad as it gets Sunday. They won't be remembered for the Elite Eight drubbing they took, but for what they accomplished in the two weeks leading up to their elimination.