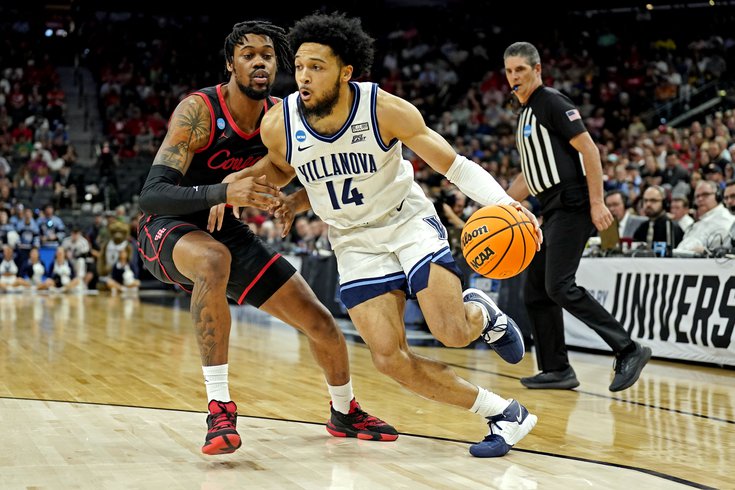 Villanova guard Caleb Daniels drives to the hoop against Houston in the Elite Eight.

Villanova's game: slow things down, play methodically, keep the score low, maintain control and advance. It's the Jay Wright way, a winning way that has the Wildcats in the Final Four for the fourth time under Wright following their 50-44 win over Houston.

While the Wildcats got out to a seven-point halftime lead, it felt a bit uncharacteristic. Houston, a top-10 defensive unit this season per KenPom rankings, swarmed Villanova ball-handlers everywhere and forced them into errant shots. The team shot just 25 percent from three on 12 attempts in the first half. Guard Collin Gillespie, perhaps bothered by a knee injury he suffered late in the Wildcats' Sweet 16 matchup with Ohio State, totaled just two points and didn't make a shot from the field in the first 20 minutes of game time.

The second half? The numbers still weren't pretty, but Villanova will take that if it meant a win. They finished the game just 5-21 from deep. They shot only 28.8 percent from the floor. Gillespie sunk just one bucket. Nevertheless, it was Gillespie icing the game with two free throws with fewer than 26 seconds remaining to give the Wildcats a six-point lead and essentially seal the win. Nova survives, as they move on to New Orleans and the Final Four, where they'll play the winner of Sunday's Kansas-Miami game.

As sloppy as it seemed like Villanova played, the Cougars were even worse. They shot a disastrous 1-20 from three and just 30.9 percent from the floor overall. As much as the Houston defense forced Villanova into ill-advised situations on offense, the Wildcats' defense paid them back and them some. Houston's 10 turnovers, coupled with a shooting performance as cold as as water ice, did them in even as 1.5-point favorites.

It says a lot about the unshakability of this roster and Wright's coaching prowess that they played a subpar game, by their standards at least, and still held the lead from 25 seconds into the game and onward.

6'7" senior forward Jermaine Samuels continued his exceptional tournament play, totaling 16 points and locking it down defensively on Saturday. This comes on the heels of scoring 15, 17 and 22 points previously this March against Delaware, Ohio State and Michigan, respectively. Caleb Daniels added a physically off the bench too, coming down with some clutch boards late and scoring 12 points in his own right.

Villanova's Final Four game will come next Saturday, April 2. A win then would put them in the National Championship on Monday, April 4, where they could play any of Arkansas, Duke, North Carolina or Saint Peter's.