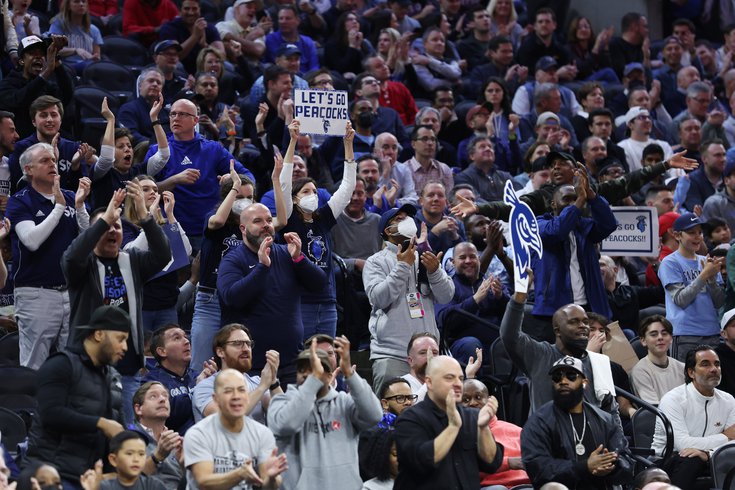 Mar 25, 2022; Philadelphia, PA, USA; The St. Peter's Peacocks fans cheer in the first half against the Purdue Boilermakers in the semifinals of the East regional of the men's college basketball NCAA Tournament at Wells Fargo Center. Mandatory Credit: Bill Streicher-USA TODAY Sports

If I didn't see it with my own eyes, I might not have believed it.

Down in deep South Philly, I witnessed a 15-seeded Jesuit school with an enrollment just over 3,000 knock off another power conference heavyweight on the way to the most unlikely Elite Eight berth of all time. Never did I fathom that "S-P-U! S-P-U!" chants would completely take over the Wells Fargo Center, making the arena legitimately shake as the Saint Peter's Peacocks did the unthinkable. It still hasn't struck midnight in Jersey City and the Peacocks are still more than alive at the Big Dance.

"You know, it's amazing. Growing up playing basketball as a kid, you dream of moments like this," said junior guard Daryl Banks III following the Peacocks' 67-64 win over the Boilermakers in the Sweet 16. "It's just a very wonderful feeling to have everybody supporting us and just being there for us. It helps us with this run, and it's just amazing."

Nothing captures the imagination of sports fans in this country like a plucky underdog. The Peacocks doing so in Philadelphia, the city that reveres underdogs in every cliched manner possible between Rocky Balboa and Nick Foles, feels so fitting. If you've kept on Twitter, the endless "Is Villanova a Philly school?" debate has morphed into a rallying cry for our I-95 brethren with "Saint Peter's is a Philly school."

Going into the NCAA tournament last week, even hardcore Saint Peter's fans wouldn't have picked the Peacocks to upset Kentucky. It would've been rational for a casual observer to scoff at the idea of Saint Peter's even making things a game against the mighty Wildcats. Three wins in a little over a week with "The Biggest Game in School History" coming once more on Sunday against North Carolina, it's clear the Peacocks belong. Throw out the seeding at this point. They're just one of the eight teams left hanging as they battle for college basketball immortality.

"We feel like we belong, and the more games we win, the more confidence we build," said junior sharpshooter Doug Edert, whose dirt-like mustache has become an ironic meme across the internet. "We have a great amount of momentum going into the next game and we're going to play as hard as we can just like we did all season to keep doing what we've been doing."

That momentum was felt on Friday night. After the Peacocks showcased that they weren't going to roll over and die against a Big 10 school early and kept things tight going into halftime, the whole arena, along with college hoops fans everywhere, were riding with Saint Peter's.

Other than the lower level section designated for Purdue fans, everyone in the building was pulling for the Peacocks. It doesn't matter if they were fans from Jersey City or Northeast Philly, or UCLA and North Carolina fans tempting fate in the hopes of playing Saint Peter's in the Elite Eight. For at least one night at the Wells Fargo Center, the Peacocks were Philadelphia's own squad.

What's next for Saint Peter's? A date with the Tar Heels, perhaps the most hallowed school in the history of the sport, early Sunday evening. Everyone may adore Michael Jordan and those iconic Carolina blue uniforms, but I have more than a hunch that South Philly will feel like Jersey City yet again.