Saint Peter's fans take over South Philly for the Sweet 16 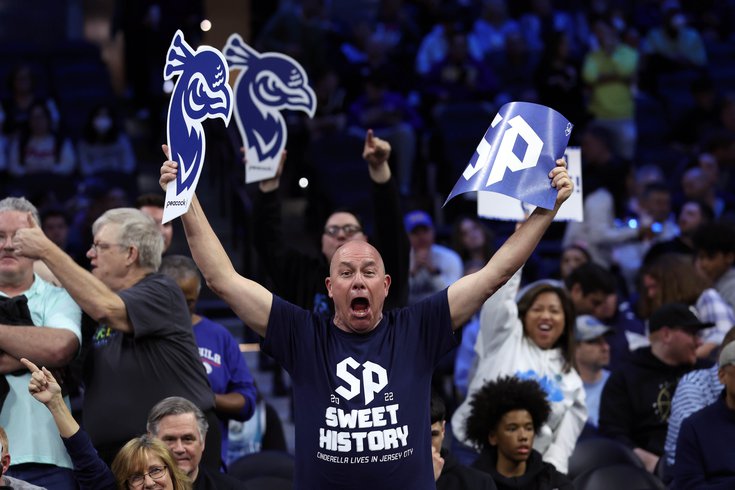 Did you know there was a National Peacock Day? I didn't until Friday, the biggest day in the history of the Saint Peter's Peacocks. The plucky 15-seeded Peacocks shocked the world by beating the Kentucky Wildcats in the opening round of the NCAA tourney, perhaps the biggest tournament upset ever. A win in the Round of 32 over Murray State left them with a date with Purdue in the Sweet 16 in South Philly.

The Cinderella story is endearing for college hoops fans, but it means the world to the alumni of St. Peter's University, the tiny Jesuit school in Jersey City that many people are just finding out exists. A large group of Peacock fans made their way to Xfinity Live! before tipoff of the team's first ever Sweet 16 game.

There was a father-son alum combo getting in on the pregame fun, Gordon Lapinski, Class of 1974, and Kyle Lapinski, Class of 2016. When asked if they made the trip down from North Jersey, they said they're actually from the area, right over the Ben Franklin Bridge in Cherry Hill. Much like every Peacock fan at Xfinity, they were living their best lives. Their rabid Philly sports fandom has extended to Peacock mania.

"Just the Super Bowl," the elder Lapinski, an Eagles season ticket holder, when asked if he has a better sports memory than what he's witnessing at the moment with Saint Peter's. As much as the 2017 Eagles were the embodiment of the Year of the Underdog, they were still a No. 1 seed that completed a 13-3 regular season. The Peacocks went 21-11 and won the Metro Atlantic Athletic Conference for just their fourth ever NCAA tournament appearance.

It's a run so unbelievable that the two admitted that they didn't even pick the Peacocks to upset mighty Kentucky in the first round. The 2022 Saint Peter's Peacocks: the team where even the squad's most hardcore fans couldn't fathom this happening. "It didn't make any sense!" Gordon said laughing. Hey, if there's an office pool prize on the line, I can't blame even the biggest Peacock out there for going chalk with Kentucky.

Those family ties run deep for Saint Peter's. A trio of brothers made the journey down from North Jersey for the game. Vincenzo, Nick and Alex Marin, the former two alums and the third "soon to be," may have been the most excited crew in the entirety of Xfinity Live!.

Vincenzo Nostradamus nailed that one. The greatest underdog college basketball story ever is far from over, as Saint Peter's pulled off the upset yet again against Purdue, winning 67-64. I've attended a lot of sporting events in my life. I never saw something like that.

A North Carolina Sweet 16 game might see the likes of Michael Jordan and Rasheed Wallace making appearances. Saint Peter's is on the other end of things, understandably, as they are low on multiple-time NBA All-Stars. They do, however, have Mark Schroback, a regular on the 1981 Peacocks team that went 17-9, and Charlie Guilfoyle, who worked in Saint Peter's athletic department for more than a decade and was with the Peacocks when they made the tourney for the first time ever in 1991.

"This is the greatest team we've ever had," Shroback said in an unmistakable North Jersey accent. "On the turnpike, easy ride for us," Shroback added about how strong of a fan following the Peacocks brought with them to the Wells Fargo Center. During the game, it was clearly a pro-Peacock crowd, especially with the UCLA and North Carolina contingents cheering on the biggest underdog out there.

Guilfoyle just seemed in awe of how far Saint Peter's has come since their eight-point loss to five-seeded Texas in '91.

"Incredible," he repeated again and again.

It is incredible. Peacock mania lives on and will return to South Philly on Sunday as Saint Peter's vies for the most unlikely Final Four appearance ever.