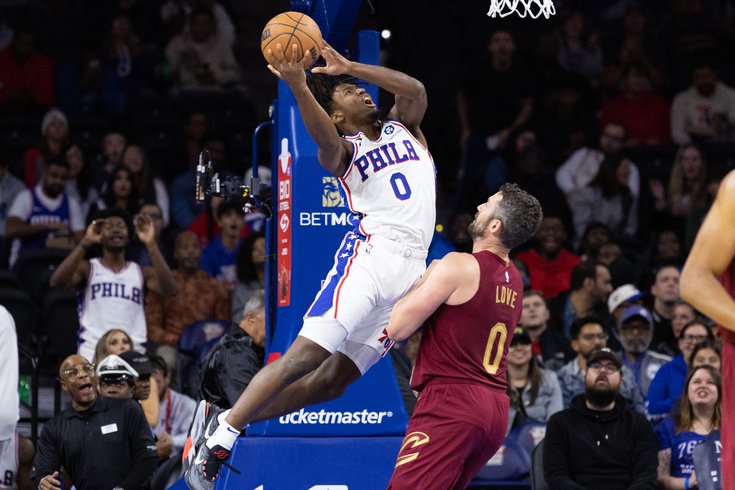 The Sixers and Tyrese Maxey looked good in their second preseason game Wednesday.

The Sixers new-look starters took the floor together for the first time, and it was Tyrese Maxey who shined brightest once again in Philadelphia's 113-112 win over the Cavs. Maxey's 21 points in 15 first-half minutes led the way for the home team.

• If you were concerned that Tyrese Maxey's dramatic leap forward as a shooter was fool's gold, I'm not going to jinx it and say you were wrong, but I will say that he does not have the look of a guy who is going to revert to his old percentages. This kid is a dangerous shooter now, and part of that is because he's a confident shooter, a player whose teammates clearly want him to hoist whenever he has a sliver of daylight.

Even if the outside shooting was all Maxey had to bring to the table, he'd be giving this team a huge lift, but it's the combination with his speed that has people dreaming about future All-Star appearances. Hard close-outs at Maxey are as much of a death sentence as leaving him uncovered would be, and his ability to come to a screeching halt and hit midrange jumpers complicates matters even further.

On Wednesday, Maxey was Philadelphia's best offensive player by a decent margin, something that was true in the opener and held up despite the arrival of two stars and another starter alongside him. He's got a little bit of everything to his scoring bag now, and the team is confident enough in him as a shooter to regularly design the offense around a Maxey catch-and-shoot look. He's at critical spots on the floor — waiting in the corner, waiting as the first pass out on a Joel Embiid post-up, always a threat to hurt the opponent.

Ho hum, another 20+ points in a half for the guy who is (allegedly) third in the offensive pecking order this season. Get ready for a big year.

• As much as you can read into rotation decisions made during the preseason, it should be noted that Paul Reed got the start in place of Embiid against Brooklyn and the first crack at backup center minutes against the Cavs. You could write off the former as trying to keep everyone in their "normal" roles, but Reed getting first crack on Wednesday is interesting, suggesting this truly is a competition for the gig.

If it is a competition, I think Reed has acquitted himself well so far. He's mostly just doing the same "Bball Paul" things you saw him do in short bursts over the last two seasons — hustle plays around the rim, deflections here and there — but he's also playing with more discipline than in years past. Perhaps that's just Montrezl Harrell's recent foul-out lingering in my brain, but Reed has mostly stayed out of risky territory, keeping himself on his feet rather than lunging at every potential block he can come up with.

A more disciplined Reed is an intriguing rotation piece who will, at bare minimum, push Harrell to be the best version of himself. Early days, but good start to the campaign.

(He's even going by Paul Reed on the PA now, which I can only take as a sign of maturation.)

• Embiid, in the span of about 19 minutes of action on Wednesday, managed to bust out nasty spin moves, a pair of great Euro steps, a couple of face-up jumpers, and what felt like 75 falls to the floor, the big man bouncing off of players on both ends. The last bit is something everybody watching the game could do without, but Embiid did what he needed to do for his first preseason game of the year. He came, he saw, and he left the game without injury or incident.

Matchups with the Cavs are funny because they're a good team with a good front court, and Embiid manages to go out there and make poor Jarrett Allen look like he just simply shouldn't be on the floor with him at times. At half speed, Embiid still managed to throw him around a little bit, and Allen's shot attempts with Embiid in his zip code were often comically bad.

Keep him upright and that's all that matters until the real games start.

• I don't think I'm prepared to buy a ticket to the James Harden revenge tour yet, not based on how he looked in his first preseason action. But this was quite a bit of fun:

I've been encouraged by Philadelphia's play in transition through the first two games, partly because Maxey has been empowered to hit top gear as early and often as possible. Harden is a big piece of that too, with a lot of hit-ahead passes and decisive playmaking that put Philadelphia in a position to score long before the defense can get back.

One thing that remains true: when teams send two guys at Harden and leave a Sixers' player open, Harden is nearly always going to find that guy. If teams continue to evolve their coverage of Harden, it'll be interesting to see if he can punish single coverage as hard as he needs to. But plenty of teams still seem content to try to get it out of his hands, and he eats that sort of approach alive to this day.

• Still a bit too much De'Anthony Melton on-ball for my liking, but this was closer to the do-it-all guy I think the Sixers hoped they were getting in the trade. Melton tracked down plays in transition, flexed some creative muscle with bench lineups, and loomed as a constant threat in passing lanes, his arms somehow getting in the way of passes he looked like he had no chance to break up.

They need him to start hitting some shots, so let's hope his arrival in Philadelphia is not the start of a downturn from deep.

• Quiet night for PJ Tucker, but he made two different hustle plays on one first-half possession, so that's about what I expected out of the Tucker experience this year. I imagine the fans will take to him pretty quickly.

• The starting lineup still has some kinks to work out, even if they had some nice flashes individually and collectively. They're still finding their spots, working on where to be when Embiid is setting up shop, and figuring out defensive assignments as a collective. For a group whose leader says they want to be the best defensive team in the league, it was not exactly a rousing effort against Cleveland. As the team adopts a more switch-heavy philosophy on defense, guys throughout the roster need to get on the same page as to when, where, and how they're going to pass assignments off.

Look, it's the preseason, so effort (or lack thereof) on the defensive end is not exactly close to playoff-level best for anybody. That's going to make it hard to tell whether guys are blowing assignments and confused about responsibilities or if they simply don't care about a preseason game. Since the Sixers looked a little bit better passing off switches against Brooklyn, I think we can give them some benefit of the doubt that it'll be better when the real games begin.

(I will say, I'm slightly concerned about how they're going to defend teams with multiple small and/or athletic creators. Philly had some trouble containing dribble penetration in this game, which is a concern I have for the top group until we see them get some real run to start the year.)

• I'm somewhere in the middle on Harden in a halfcourt setting right now, with some lingering concerns about the state his body is in. There were some moments where I thought he showed good burst, better than we saw last season, dusting by guys and getting to the paint fairly easily. But he also struggled to score at the basket when he got there, a familiar issue that limited his scoring upside down the stretch last year.

There was a play in the second quarter where the Sixers ran a double drag for Harden, he got the space he seemingly needed, and then he could not finish through/around length at the rim. One or two plays across 19 minutes aren't a cause for concern on their own, but Harden will need a return to form around the basket in order to be the three-level man he was for the vast majority of his career.

• Preseason basketball is bad on a general level, of course.

• Preseason for the officials, too, as I must remind you all. It was pretty hysterical getting a, "Ref, you suck!" chant. in South Philly in the first half of the first home preseason game of the schedule. Never change, gang.

Honestly, Thybulle being on the floor deep in the third quarter of a preseason game is all you really need to say about where he's trending. A multi-time All-Defense guy is fighting to simply make it into the rotation for the team he was drafted by on the final year of his rookie deal. They'll likely need him at some point this year, but he's not trending in the right direction.