What to watch for in Sixers' preseason opener vs. Nets 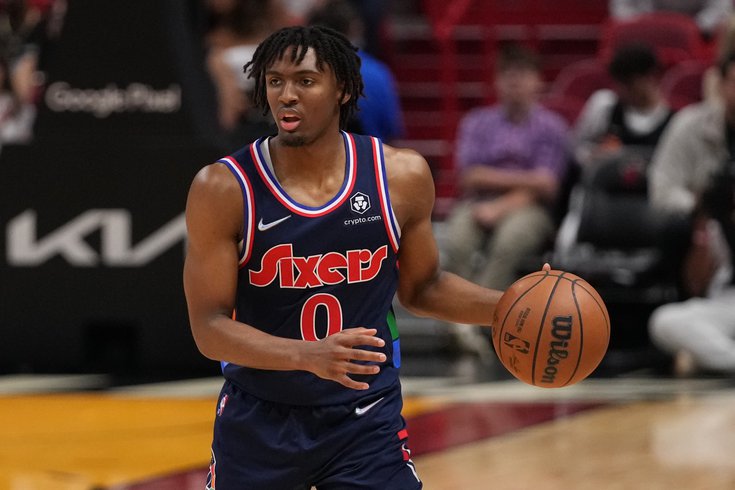 After weathering the storm down in Charleston last week, the Sixers are ready to begin their preseason against the Brooklyn Nets on Monday night. There's a guy on the other team you may have heard of before, but I suspect a lot of fans are more interested in the new-look Sixers than whether Ben Simmons finally decides to take jumpers after playing basketball his entire life.

Here are a few storylines to watch in the opening game of the preseason for Philly.

While finishing up in Charleston over the weekend, Doc Rivers told reporters not to expect their full group to play against Brooklyn, noting that they had "1000 players" available during camp. All we know for sure is that Rivers intends to sit "at least three," which doesn't exactly narrow things down.

That will force us to wait to get a first look at the new starting lineup, and frankly, there won't be much intrigue with the starters vs. Brooklyn if they're all holdovers from last year. By now, we know what the Joel Embiid/Tyrese Maxey/Tobias Harris combo looks like on the floor, and even with James Harden, everyone is more excited about what he looks like individually. The only mystery left is how P.J. Tucker slots into that group, though he feels the likeliest to get a rest as the elder statesman of the group.

The smart money is on Embiid sitting at least one of their games over the next few days, and it appears he may be joined by the other star in the backcourt:

As it approaches 1pm, both Joel Embiid and James Harden are still in the gym getting shots up, nearly 3 hours after shootaround began this morning. Seems unlikely we will be seeing a full lineup for the 76ers tonight in Brooklyn against the Nets.

This leads us to one of the roster's most interesting battles.

If we take Rivers at his word, nobody owns the backup spot behind Embiid yet. Montrezl Harrell seems the likely choice to play the most minutes behind Embiid, given his history with Rivers, but the head coach has talked about the position as if the Sixers have a three-headed monster of Harrell, Tucker, and Paul Reed.

It's the last name in that list that enters the preseason with the most intrigue. Rivers noted during camp that they'd experimented with Reed at the power forward spot next to Embiid, a style that many fans are interested in seeing that I'm a little more dubious of. If the Sixers can take advantage of Reed's strengths — namely his activity on the glass and his switchability as a defender — there might be something to it. When we saw Reed next to Embiid last year, admittedly in very small doses, teams were forced to deal with considerable length around the painted area.

Otherwise, the question becomes if he can make enough shots to force defenses to respect him from beyond the paint. If not, he becomes one of a long line of Embiid teammates who cramp the floor by standing on it with the franchise player. Even if Reed makes shots, he's a natural candidate for teams to dare to shoot, a guy with awkward-ish mechanics that is certainly less of a threat than the primary stars he'd be next to.

Should Tucker play — and even if he doesn't play on Monday — it'll be fascinating to see just how much the Sixers are willing to lean into and begin creating a small-ball identity this season. Under Rivers, the Sixers have entered the last two seasons with a traditional big nailed on at the spot behind Embiid. This year, all their options are on the smaller side, forcing Rivers to think long and hard about how they must develop this group for an 82-game run plus the playoffs. Tucker has played small-ball center at multiple stops, including with Harden in Houston, so at least he has some experience in the role generally.

Where does De'Anthony Melton slot in?

Melton's name has come up a ton before and during training camp, the Sixers very excited about what he might add to this group. On the first day of training camp, the head coach noted that their new acquisition had blown up a lot of plays with his activity on defense, something we saw hold true during Philadelphia's open practice session later in the week.

What's left to figure out is Melton's spot in the rotation, and who he combines with during his minutes. During the informal workouts Sixers players had together prior to training camp, Melton got some reps in with starting guard Tyrese Maxey, and Rivers has expressed some excitement about how that duo will pair this season.

How much room will Rivers afford Melton to experiment and learn through failure? He has tended to give a long leash to his backup guards over the years, which could either allow Melton to reach new heights or become a victim of his own worst habits. Finding a happy medium that provides him with on-ball reps without drowning him in responsibility will be key — Melton's numbers while playing next to a lead playmaker last year were tremendous, and he has the multi-faceted skills to succeed in a hybrid role.

The end of roster battle

There are three guys on bubble watch for me heading into Monday's preseason opener: Isaiah Joe, Charles Bassey, and Trevelin Queen. The former has the clearest path to a spot on the roster at the moment, but never lock anything in before we see these guys on the floor against hostile competition. With the assumption being that Embiid won't play, this may be Bassey's best chance to play his way into a roster spot, though I think signing Harrell was close to a death blow for his chances here, and Rivers has not so much as mentioned his name when talking about backup center options during the preseason.

For Joe and Queen, it's all going to come down to shooting. Joe is a more natural marksman whose results have not always matched his pedigree from deep, while Queen is an ambitious player whose results don't match his confidence. Joe feels like the younger and safer option to come good, though I am at least slightly intrigued by Queen playing with NBA spacing around him.

Elsewhere in end-of-bench news, Jaden Springer has earned strong reviews for his defensive work in camp, though it remains to be seen whether he can provide enough offensively to play any sort of role this year.

"He doesn't even know how to play yet. That's the crazy part," Tucker said last week. "He's just out there just bulldozing. I love it."

What the heck do Ben Simmons and the Nets look like?

I am more fatigued by Simmons discussion and "what it all means" than perhaps anybody in America, but even I can say that I'm interested to see what Simmons looks like playing for his new team in a new setup. He has not played a real basketball game since the summer of 2021, and he is now on a completely different team with (presumably) much different responsibilities. How will that impact his game and his choices on the floor?

Even if you're not all that interested in thinking about Simmons, these Nets will provide a nice early stress test for the Sixers on the defensive end. Though I don't have to tell anyone here about Simmons' offensive deficiencies, he and Kevin Durant bring a lot of size to the table that the Sixers have to cope with. And with their wing-sized players likely to defend that duo, it leaves a big question to be answered — which member of the backcourt gets to chase around Kyrie Irving? Neither Tyrese Maxey nor James Harden is well-equipped for that matchup.

(Harden defending Simmons will likely happen from time to time, and Harden's strength as a post defender will be useful there. Of course, that's if Harden suits up, which feels unlikely at this point.)

We're likely to see a bunch of different lineup combinations regardless, but this will be the first time we can get a feel for which combinations already work and which need more time to gel. Don't expect the Sixers to look like world-beaters on Monday night, but get as jazzed up as you can for a preseason opener with multiple starters missing.