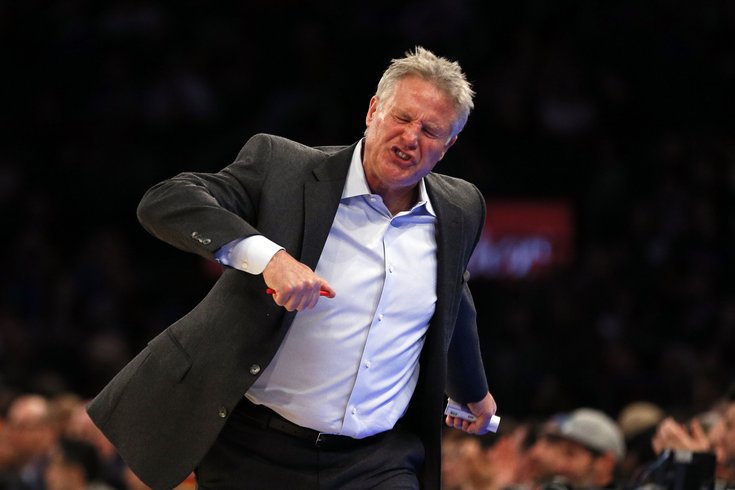 Brett Brown was not his happiest self in New York Saturday night.

The Sixers finally found a way to win on the road on Saturday night, squeaking past the New York Knicks for a much-needed win away from home, 90-87.

Here's what I saw on Saturday night.

• Is there a better first-half player in basketball than Ben Simmons right now? I don't mean that as a dig, he is absolutely pummeling teams in the first 24 minutes of games.

The Sixers have gotten the most out of Simmons recently not because he's playing without Joel Embiid, but because they have made a concerted effort to lean into his versatility. Whether in half court or transition, the Sixers have avoided trying to force-feed Simmons the ball at the earliest possible juncture, instead of giving him time to get downhill and into the ideal position to attack.

One of the gripes I've had with their transition game since Simmons came to town is that it's almost too reliant on letting him go coast-to-coast. When he is able to run the floor with somebody else handling the rock, the Sixers are able to get him finishing opportunities, and nobody in their right mind wants to get in his way when he has a full head of steam. When he can run with Tobias Harris or Josh Richardson handling the ball, you see how dangerous he can be as a scorer, not just as a facilitator.

And that is something I have been harping on a ton recently. If it's not a focus at the trade deadline, it should be a point of emphasis at some point in the near future to get players around Simmons who can take the ball out of his hands at times, making use of the forward skills he has in the toolkit.

(One additional note: Simmons combined with Harris for a beautifully-executed trap to blow up New York's offense late in the game, coming up with yet another huge defensive play with the game on the line. He keeps coming up large when it matters on defense, even if we all know the way it goes on the other end in crunch time. Simmons deserves a heck of a lot of credit for their success in close games this season.)

• The biggest difference between Matisse Thybulle now and Matisse Thybulle at the beginning of the season is the level of patience he plays with on the offensive end. Early in the year, Thybulle did not know which shots were and weren't smart looks for him — there were times when you would have thought he was JJ Redick, trying to shoot off-balance shots around screens. That has been a point of emphasis from the coaching staff, who have stressed to Thybulle to focus on attempts where he is straight up and down.

Give credit to the rookie for being receptive to that message instead of trying to plow through. With his feet set and shoulders square, he's doing damage as a shooter, and in spots where he would have launched wild shots in the past, Thybulle is gathering himself, either finding teammates with passes or using his handle to create just enough separation to keep the offense moving.

Thybulle is a long way from being able to use his handle to attack defenses with any regularity, but buying into his role has made a huge difference for him, because defensively everyone can see that he has the goods.

• Speaking of buying into roles, it feels like Furkan Korkmaz has turned a corner in Philly, and that has changed the sort of plays the Sixers run with him on the floor.

Teams no longer feel comfortable just leaving Korkmaz alone on the perimeter, and that creates an interesting dynamic. When Korkmaz has the ball, that means he often has opportunities to attack closeouts and make use of his floater game. But he has found new life as a screener, particularly in looks with Simmons handling the ball, as defenses either have to choose between walling off the paint against Simmons or conceding an open look to Korkmaz.

As they did in Friday night's game against Chicago, the Sixers dusted off a bunch of old looks they used to run with JJ Redick for Korkmaz. It has been to the benefit of Korkmaz and Simmons, and while I don't know if Korkmaz can ever be unleashed in the two-man game with Embiid the way Redick was, it may be worth a shot.

• Boy did Harris have a clunker in New York. Weirdly enough, it wasn't a bad game shooting the basketball from the outside, but Harris spent the night getting physically bullied by the Knicks' army of power forwards, which is a rare sight during a season where Harris has acquitted himself well on the defensive end.

But when it was time for someone to step up and hit a shot late in the game, it was Harris who delivered for Philadelphia, taking advantage of some lax Knicks defense after a timeout by absolutely nailing a big shot when it mattered.

This has been a quiet game for Tobias Harris overall, but he's at least shot 4/8 from 3. Huge shot here to take back the lead for Philly pic.twitter.com/ngulTlS4Nj

They didn't pay him to make every shot, but they certainly paid him to hit some big ones. That make definitely qualifies.

• Is it a bad thing when your big offseason signing and the insurance policy for Embiid gets bodied by Taj Gibson for an entire half of basketball? Survey says.....yes.

Look, when Horford is struggling against guys like Mitchell Robinson who can live in airspace that he can't, it's hard to get that upset about his play. The Sixers haven't helped him out at times with their coverages, leaving him susceptible to getting burned on lobs and pick-and-rolls. But Gibson, a guy who is just a wily vet who scratches and claws his way to points and rebounds? That's supposed to be an easy assignment.

On the second night of a back-to-back, Horford made it look like he was moving in cement, and there were defensive rebound opportunities where he stood flat-footed underneath the rim, never looking like he had any interest in hauling in the board. You will be shocked to learn that the game gave him what his actions asked for.

Historically, rebounding has almost always been an issue for Horford, who is not the biggest guy in the world. But when it's effort-based as it has so often seemed this season, that's just inexcusable, especially when it's a guy who you brought on the basis of his professionalism and commitment to leading/winning. Far too many extra possessions have been gifted to opponents by Horford this year.

I get that he is an older player and that this was a back-to-back where he played well on the front end, but that was inexcusably bad. Wide-open shots everywhere, not much of a challenge on defense, and he fell flat on his face. Way too many of these nights are piling up for Horford.

(An adjacent discussion I want to touch on real quick — there are some people who were mad during the game that the Sixers were going to Horford in the midst of a tough game. While that sounds nice, if you are creating wide-open look after wide-open look for a guy who has made a living pick-and-popping teams to death in big moments, and that guy can't buy a basket.)

• If Mike Scott is going to overthink wide-open threes and either dribble or pass out of them, there is no place for him in an NBA rotation. He turned down at least a pair of open shots in the fourth quarter, and Brown continues to stick with him through all of this, in spite of the fact that he has rotated several other players out of the rotation when they have struggled. It's all a bit puzzling to me.

• The plus-minus figures would have suggested Richardson was one of Philadelphia's best players on Saturday night. My eyes would disagree — there were three, four, perhaps even five different plays where I just sat and scratched my head, wondering what he could have been thinking.

The best way I could describe Richardson's mistakes are that they're plays you expect young playmakers to make. Passes that are being thrown into windows that obviously aren't there, plays that you expect to go away once they get some experience at the pro level. He was a one-man turnover problem against the Knicks, who aren't exactly loaded with savvy defenders you could lean on as an excuse.

And yet in spite of all of this, he was one of their best attackers on the evening, which sort of underscores the point that they are a team in need of some upgrades and tweaks. Richardson was forced to carry the unit that usually has Embiid lifting them up at the end of 1st/3rd quarters and the beginning of 2nd/4th quarters, and in that role, he did as well as you could have hoped surrounded by the likes of Norvel Pelle, Mike Scott, and the rest of the gang.

• A quick rant — Marcus Morris going by "Marcus Morris Sr." on his jersey bugs the hell out of me. This isn't a situation where he's in the league at the same time with his son, a la Ken Griffey. It comes off more like, "Look at me, I named my son after myself!"

When Jr. gets the NBA callup, let's talk then.