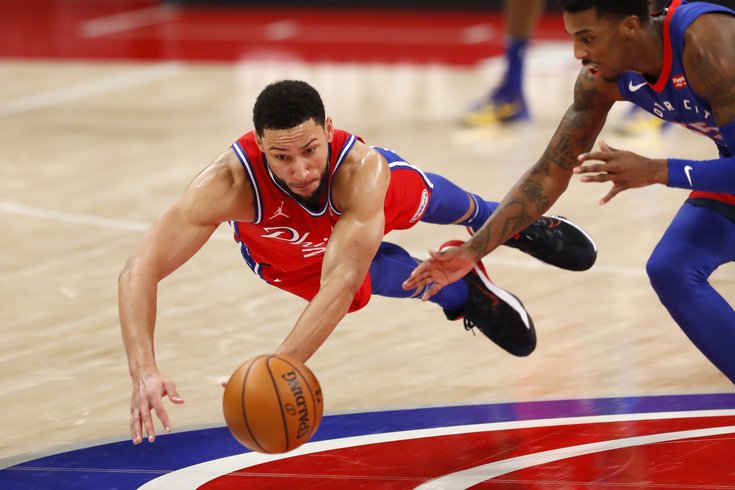 Ben Simmons has been a much better version of himself in the Sixers' last two games.

The Sixers needed every bit of 48 minutes to outlast a bad Pistons team, but they would eventually close out a 114-110 win on the road thanks to another 30+ points from Joel Embiid.

• The Pistons decided for much of the evening that they were happy playing single coverage against Embiid. I don't know what their advanced scouts have been watching this season (perhaps not much!), but it was clearly not the best strategy to slow down Philly's MVP candidate.

Embiid was just running through Pistons players at times on Saturday night, forcing smaller defenders to wrap him up, hack him, or flail at his shot attempts as he willed himself to the free-throw line. He made easy work of Mason Plumlee, former Sixers big man Jahlil Okafor, and put up another casual 20+ points in another first half, bullying Detroit while barely breaking a sweat.

In the past, it felt like Embiid's best games had to come when the Sixers did almost nothing except play through him. He and his teammates have found a better way, hammering favorable matchups when Embiid has them but not living or dying with him creating something out of the post.

I'm in the camp that thinks it doesn't really matter how well Embiid plays or does not play when he is available for back-to-backs, because those games are never going to happen in the playoffs. That said, it's a testament to the improved shape he's in that he could come out and dominate the way he did on Saturday night. The shots did not fall for him down the stretch, but Embiid made up for that by playing some outrageous defense at the rim in the closing minutes, snuffing out several would-be buckets for Detroit.

Even if we set that aside, putting up 30+ is light work for Embiid at the moment, and that's not something you should ever take for granted.

• Was one great quarter all it took for Ben Simmons to get his season up and running on offense? He looked like a completely different player in the first half against Detroit after the strong finish against Boston, finally cashing in on the looks the Sixers have been force-feeding him all season.

Nowhere was that more evident than on the low block, where Simmons absolutely brutalized smaller Pistons defenders at every opportunity. Moves that we hadn't seen him attempt, like up fakes and running hooks, were suddenly pulled back out of the toolbox.

And this was a team effort — Embiid seemed hyperaware of the need to keep Simmons on a roll, clearing out of space in the paint on multiple occasions so that Simmons could go to work. Even when Detroit tried to pick Simmons up in the backcourt to prevent him from building a head of steam, his running mate was ready to set him free:

Another aggressive Simmons attack. The Pistons pick him up full court so Embiid sets a screen for him and that's all she wrote. pic.twitter.com/SO208dv0xf

This is why it's frustrating to see people happy he barely clears the stat thresholds to pick up triple-doubles. Simmons is absolutely capable of filling up the box score while playing with an attack-minded mentality with the ball in his hands. In fact, it gets easier for him to find open teammates if teams need to respect him as a scorer.

As has often been the case over the last two seasons, it was also Simmons leading the way in the effort department, busting his butt on defense with a lot of other players dragging on the second night of a road back-to-back. Rivers still seems reluctant to use him as the "best player stopper," maybe because he's not trying to wear Simmons down with the No. 1 opposing assignment every night, but once he turned him loose on Detroit's Jerami Grant, it was basically a wrap for Grant's night. Simmons was just punking him up and down the floor.

(And hey, big free-throws in crunch time for Simmons, who has always had issues at the stripe. Good to see him calm and collected when it counts.)

• Seth Curry not making a single three-point shot was borderline shocking to watch, but he is such a calming influence on the floor that it's easy to see why lineups that include him are cooking this season. I suppose that's the trade-off of his occasional reluctance to let it rip from deep — Curry is measured at all times, taking high-quality shots almost exclusively and rarely ever missing an opportunity for a teammate to get a better look.

His skill level certainly helps. With the big boys clearing a path for him with screens, Curry gets to the basket just enough and threatens from midrange just enough to keep everybody honest. Very pleasing player to watch on offense.

• I mean this mostly as a compliment — the Sixers only really gave a s**t for about half of this game, but they now possess the ability to get it over the line even when they don't have their best stuff. This felt like the sort of win a younger Sixers team never seemed to close the deal on, mostly because they were an all-or-nothing sort of outfit.

During a long season, a loss here or there against a lesser opponent is not going to kill you. But Philly made a habit of giving away far too many of these games in the past, struggling to find the middle ground of intensity between "National TV game vs. a contender" and "Saturday night back-to-back against the Pistons on the backup NBC Sports channel." You don't need your best stuff to beat Detroit. But you have to offer a professional effort, and Embiid and Simmons are finally starting to see how to make that happen.

(On the other hand, not great that the stars had to play deep into crunch time on the second half of a back-to-back.)

• Okay, so you can't actively not care for stretches of the game and avoid criticism altogether. There were some ugly stretches of this game for Philly, with perimeter defenders allowing far-too-easy penetration in the first half of the game, and it would be nice to see the Sixers blow a team like this out early in order to rest guys in the second half. Oh well.

• Doc Rivers is going to have to figure out exactly what he wants to do with his bench because the pieces look quite disjointed at the moment. Between the reintroduction of Furkan Korkmaz and some natural volatility for backup players, the Sixers' bench was an absolute mess for the first 24 minutes against Detroit.

If Rivers has decided he wants to stick with the original starting lineup, the first two perimeter players off the bench should almost certainly be Shake Milton and Tyrese Maxey. The latter seems to have lost his spot to Korkmaz, a guy Rivers has confessed his trust in dating back to camp, and that's going to be an up-and-down experienced based on Korkmaz's play so far this year. Maxey hasn't exactly burned the nets down recently, but he was the only player on the bench to score in the first half, an eye-popping stat that drives home how bad they were.

I'm no huge fan of Mike Scott, but the combinations have been a bit wonky as Rivers works around the absence of their backup four. Lineups with Dwight Howard, Matisse Thybulle, and Simmons, for example, are a spacing nightmare, even if you can talk yourselves into their defensive strength.

• Embiid focused a little too much on trying to win the foul-drawing contest in the second half, and Pistons rookie Isaiah Stewart did a good job of playing disciplined defense once Plumlee fouled out of the game, leading to some ugly attempts from Mr. Embiid in crunch time. Hard to argue with a guy who routinely catches defenders with their hand in the cookie jar, but he can't let that be his only mode of attack in big moments.

• If the Sixers are eyeing an upgrade looking forward at the playoffs / second half of the season, a fifth starter who either replaces Danny Green or moves him into a bench role is the most obvious move to make. He knows what he's out there to do and he mostly stays within that role, but his body seems like it's trying to play catch-up with his mind right now. Even when it's something as a pump fake on a jumper or a layup attempt after a smart cut, Green just looks off the pace.

You could sell me on the idea that he'll be just fine, and he's a guy particularly susceptible to dips on the second night of a back-to-back, having been a part of consistent deep playoff runs in his career. But there have been some ugly nights already this season.

• Doc Rivers told reporters before the game that the three-man group of Embiid/Harris/Simmons was in doubt to play, and Tobias Harris played like a guy who probably could have used a night off. He has tightened up his decisionmaking this season and he continued to compete on defense Saturday, but he had three or four headscratchers against the Pistons, turnovers that have been cut out of his game in the early stages of this year.

No reason to fuss about it, but a tough one all the same.

• While we are on the subject of head-scratching plays, Matisse Thybulle was a one-man wrecking crew in the absolute worst way possible on Saturday. There was a first-half possession where he had several opportunities to move the ball to an open teammate who might have a chance to do something with it, and instead continued to dribble the air out of the ball before eventually attempting a wild layup that hit nothing but glass. Know your role, young man.

• Dwight Howard was called for a foul on a play where he had a piece of his shorts ripped off. Picking up a technical foul after complaining about it seems pretty egregious to me, so I have to send a complaint in the officials' direction on that one.