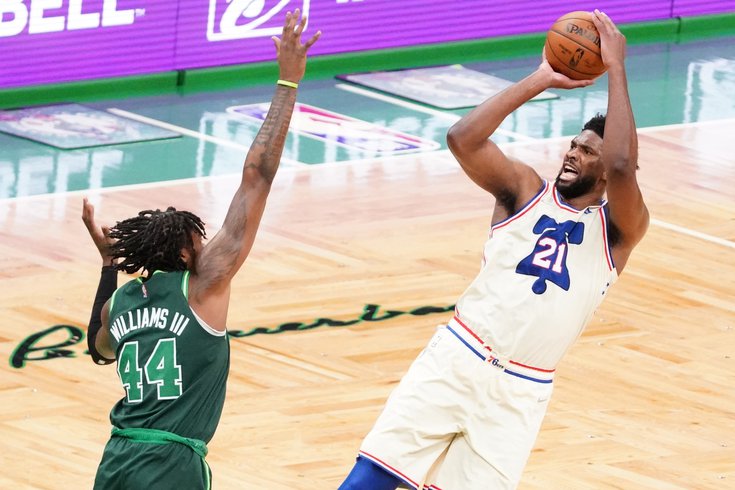 Joel Embiid looked like his old self in Boston Tuesday night.

The Sixers made easy work of the rival Celtics on Tuesday night, coasting to a 106-96 win in a game they dominated with cohesive team basketball. Joel Embiid led the way for Philly with a casual 35 points.

• There were quite a few questions locally (including in recent mailbags from your truly) about whether the Sixers should be at all worried about an early rounds matchup with the Boston Celtics. I have consistently believed the answer is no, and I feel no different after watching this game for a simple reason — the Celtics' options against Joel Embiid are so bad that it's almost criminal.

Robert Williams III is a nice enough young player, but he's giving up considerable size in any matchup with Embiid in post. It doesn't get any better when Boston goes to the bench, with some combination of Luke Kornet and Mo Wagner hoping not to get thrown through the rim every possession. The Celtics basically need to double Embiid on every possession, and that's not going to change much when Tristan Thompson is healthy. These guys do not have the size, experience, or skill to hang with the big guy one-on-one.

Here's why that's so dangerous for Embiid and the Sixers — if Embiid can reliably predict a second guy is coming on every single possession, there's basically no danger created by the double team. Boston's success against Embiid has come through mixing and matching, forcing him to guess what they're doing on every possession, and the element of surprise has basically been eliminated. That was the case Tuesday, and Embiid did an excellent job of waiting out the double and starting the swing-pass chain for open threes.

On the defensive end of the floor, his contributions were just as (if not more) important. The Celtics walking into open jumpers with Embiid in drop coverage infuriated Sixers fans over the years, and Embiid managed to provide the best of both worlds in Tuesday night's meeting, protecting the rim well while playing much further up in pick-and-rolls. Some of that is due to factors out of their control — Kemba Walker just does not look like the same guy he used to — but credit to the big guy all the same.

He would be the best and most impactful player in a series between these two teams by some distance. Don't overthink it, even if he's wearing a brace he claims to hate.

• Here's another reason to be unconcerned by the Celtics assuming both teams are healthy — Philadelphia's starting lineup has been better than them by a pretty comfortable margin this year, and there's no reason to believe the Celtics are going to push a magic button in the playoffs and suddenly be a team they haven't been all year. Starters will only play more in the postseason, and this Sixers group is pretty damn good.

The Sixers really shouldn't look as cohesive as they are, especially compared to a team with as many holdovers as the Celtics. They went in-and-out of two-man game and more elaborate sets rather easily against the Celtics, with Embiid often at the center of all that. His work with Seth Curry and Ben Simmons wasn't ultra-productive, necessarily, but there were some beautiful give-and-gos and passing sequences that kept the Celtics scrambling.

There are nights when individual defenders get their shine in this space, but I thought Philadelphia's defensive game plan was the star in slowing down Boston's wing combo. The Sixers didn't send aggressive help or hard doubles the way the Celtics tend to when Embiid is in the post, but they used timely help to force Jayson Tatum and Jaylen Brown to be playmakers, which is a much better outcome than letting them go at you one-on-one. Just showing them different coverage than what they offered in years past has been a game changer, with the Tatum/Brown/Walker triumvirate forced to make real reads coming off of screens.

Outside of the attention to detail in those individual matchups, I thought we saw some of the most connected, inspired defense we've seen from this group all year. There were possessions where 4-5 different rotations were made to get into position and reset their side of the ball, which is a level of commitment you have to have in the playoffs but often isn't present down the home stretch of the regular season. After a bad performance/effort on Sunday, it was good to see the Celtics bring out their best.

And really, that was the story of the game on both ends for me. The Sixers did not have an especially great night on offense — Tobias Harris struggled to get it going for most of the night, in fact — but they consistently made smart, unselfish decisions and played connected in a way their opponent couldn't dream of on Tuesday night. The best thing you can say about these Sixers with the season slowly winding down is that they look like a pretty cohesive group, which was not an easy thing to achieve given all of the built-in excuses they have to fall back on.

• One of the primary beneficiaries of the attention paid to Embiid was, who else, sharpshooter Danny Green. The Sixers had him stationed all around the perimeter against the Celtics — in the weakside corner, as the entry passer, at the top of the key — and he was absolutely money from every single spot, putting up 14 points on 100 percent shooting in the first half alone.

The beauty of Green's game is that he still brings value to the floor even if you just throw out the shooting altogether. You can't always pick it up on the broadcast, but he's an active communicator, and that's a part of every successful rotation and closeout the Sixers execute when they're in scramble mode. It's not a shock that their most crisp possessions as a defensive unit come with Green on the floor, either because he's putting out a fire or directing someone who is in position to do so themselves.

The Sixers not making the Kyle Lowry trade could end up being a blessing in disguise. Green is going to deliver some maddening performances between now and the end of the season, but he will stay ready until they play their final game of the year, be it a four-game exit in the first round or a championship run that ends in late July.

• Some individual spotlights on the defensive end of the floor aside from those already mentioned:

On the whole, a big key for Philadelphia was simply playing disciplined on and off the ball. They didn't reach much, they didn't pick up cheap ones around the rim, and they (mostly) contested jumpers cleanly, forcing the Celtics into tough shots without overstepping to make it happen.

• It is honestly remarkable that a player can spend as much time in the post as Simmons does and have no plan or purpose when the ball hits his hands near the paint. If there's a reason I don't accept the premise of, "He doesn't need a jumper!" it's because the areas where he's supposed to theoretically be good on offense aren't exactly strengths, either.

Granted, most guys who go up against Marcus Smart in the post quickly figure out that it's not a matchup in their favor. But Simmons going toe-to-toe with him and tossing up a shot that doesn't even make it above the rim is still hard to fathom. Is it because so much of his mind is on passing, because he has not properly worked on expanding his skill package down low, a mix of both? Impossible to say or know, but it's downright gruesome at times.

(To Simmons' credit, he did have a nice little bounceback spurt in the third quarter. That's not enough to erase everything else.)

• This was admittedly a pretty bad night for this Celtics crew, but they just feel like such an unnatural combination of players and skillsets. I'm not exactly sure what's missing, but they look like a band with a bunch of talented guitar players who desperately need a bassist, a drummer, or even Christopher Walken's cowbell-loving character from the sketches of Saturday Night Live.

Maybe that's because Walker looks to have slowed down considerably (TBD if that's a permanent issue), maybe it's because Gordon Hayward filled in a lot of blanks, maybe it's because they desperately lack some sort of organizer on the back end when something breaks down on the perimeter. I don't watch them night-to-night, so I can't make a declaration with any real authority, but they do not resemble the Boston teams who have given the Sixers fits in the past.

(Famous last words, of course. But if Kemba Walker can't fry Seth Curry in an individual matchup, the Celtics are toast.)

Not a chance in hell.