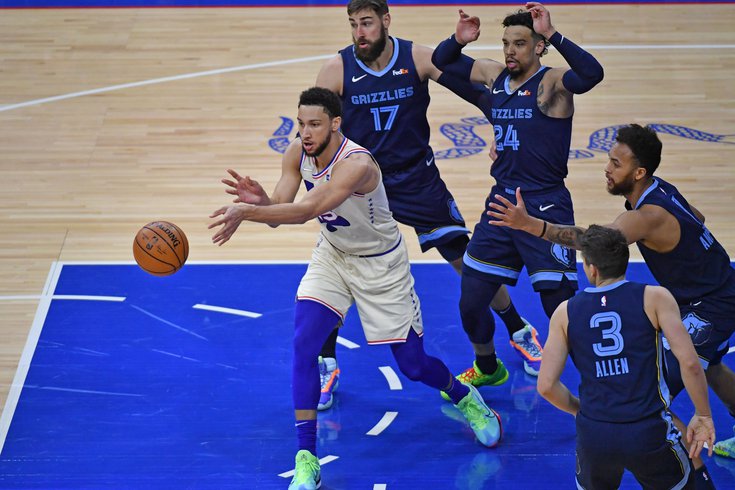 The Sixers, particularly Ben Simmons, did not perform well in their second game of a back-to-back on Easter Sunday.

The Sixers failed to show up to play against the visiting Memphis Grizzlies, letting a tough start from the field bleed into their effort in what would eventually be a 116-100 loss. That flatters the home team more than they deserve, with a huge comeback in garbage time bringing the result closer than it was in reality.

• Tobias Harris was efficient on the offensive end of the floor. It didn't exactly make a difference, but hey, somebody has to be the ray of sunshine.

Okay, there were two — hats off to the young guys who came in late in the fourth and fought tooth and nail to make this game look competitive. It'll go down as a loss all the same, but they relished the opportunity to get minutes.

• There's not a whole lot you can say positive about Philadelphia's first-half performance other than the fact that it ended after 24 minutes of play. They were bad in just about every facet of the game, regressing to their old ways without Joel Embiid after playing just one game with him back in the lineup the night before.

Offense was the biggest issue for Philadelphia against Memphis, and it largely came down to a lack of creative talent on the perimeter. Possession after possession went sideways, with the Sixers unable to put pressure on the rim and thus unable to create many open shots from the perimeter. Give Memphis credit for some of that — they have some big dudes lurking in the paint when guys get past the first level of defense — but getting there at all was a major issue. Shake Milton, for example, had a whale of a time trying to beat DeAnthony Melton off of the dribble.

Philadelphia's gameplan/counter to that wasn't without merit, and their small group to start the game attempted to pick and pop Jonas Valanciunas to death, knowing he doesn't want to close out to the three-point line. When they executed, those plays weren't half bad, but the Sixers made a number of unforced errors on the passes back to the perimeter, squandering open shot opportunities that should have materialized.

And then, well, they shot like crap on top of that. The Sixers were a disgusting 5-for-18 from three and 16-for-44 from the field in the first half, missing tightly-contested looks and wide-open threes alike. This is a group that looked every bit like a team that had played the night before.

(I don't bring that up as an excuse, by the way. The Sixers were well on their way to a blowout win against Minnesota in the third quarter of Saturday's game, and they have no one to blame but themselves for choking away most of that lead and forcing their regular rotation players to play heavier minutes counts than necessary.)

• Philadelphia didn't play a terrible first half on the defensive end of the floor, and I think Ben Simmons combined with quite a few teammates for some nice plays showing against pick-and-rolls. Memphis wasn't particularly turnover prone against that coverage, but it disrupted their possessions enough to make them work deep into the clock.

Keeping Valanciunas off of the offensive glass, on the other hand, was a major problem early, and the Sixers' small-ish lineup had a difficult time doing anything to stop Memphis' starting center at the hoop. The Grizzlies relied on his second-chance creation and size advantage in a big way early, and it only got worse over time, as the collective spirit of the team seemed to wilt as the game wore on.

Once that happened, defense quickly became an issue. The Grizzlies were off and running on just about every missed shot and turnover from Philly, and the home team did not exactly give it their best effort to run with the young Grizzlies or buckle down when the Sixers were fortunate enough to go against them in a halfcourt setting. There were decisions that reflected tired minds, and that's when the Sixers mustered up enough effort to get there in the first place. Quite a few Sixers offered closeouts that looked more like half-hearted attempts to claim they made the effort so they wouldn't get yelled at in a film session. It didn't exactly scream legitimate defense.

Again, I have to reiterate, the Sixers have no one to blame but themselves for looking a little weary on Sunday. They could have easily bought themselves some extra rest/energy with a professional effort from the second unit against Minnesota, but they played with their food and paid for it the next night. That's life in the NBA.

• I feel like I have written something to this effect a bunch of times this season: Simmons came out of the gate looking like he was ready to have a big night, but his willingness to attack the rim quickly faded from view and he became a passenger for a lot of the evening. At some point, these sort of performances are the norm, not the exception, and we should all stop being surprised when they happen (myself included).

The sad thing about this performance is that it was largely the same as the one we saw against the Grizzlies last time they played. One quarter with some nice highlights, passivity throughout the rest of the game, and some dumb fouls that he never should have even thought about committing, including a loose ball foul 90 feet from the basket on a half-assed attempt to grab an offensive rebound.

His play since the All-Star break has been one of the worst extended stretches of his career, with the only competition being his stretch of play to begin the season. That says a lot about the year he is having on offense — we have seen time and time again how transformative the increased spacing has been for Embiid, who has gone from All-Star talent to MVP contender in the improved ecosystem. The ecosystem has not changed much for Simmons, it stands to reason, because he is the guy setting most of his own limitations on the floor. For some people, it is always about the combinations of players around him, not the guy who is supposed to be the franchise-driving talent at the center of some of Philadelphia's most-played lineups.

The Grizzlies are a good defensive team as a unit, but Kyle Anderson/Dillion Brooks are not exactly Scottie Pippen and Michael Jordan on the defensive end. For the second straight game against the Grizzlies, Simmons had switches where he could attack the likes of Grayson Allen, and he didn't do much with them.

Again, if someone wants to come out and say he's hurt and they need to shut him down, fine. There are signs that he is lacking a little bit of punch physically — his inability to shed screens in the Minnesota game on Saturday was a noticeable issue. But as long as the Sixers deny there's a problem for him, which they have publicly and privately to date, there are no excuses for how bad he has been. Whether they're putting Dwight Howard or Mike Scott at center, he's coughing the ball up, refusing to get to the basket, and ultimately leaving the game in the hands of other players to decide.

(And look, that is ultimately my biggest question mark with this team and has been from the beginning. When it's nut-cutting time in the playoffs, relying on role players to decide your fate is not how any team wants to live. Teams are going to try to force him to beat them as a scorer rather than letting Embiid or even Harris eat, and he has shown no inclination to even attempt to take that challenge.)

• Broadly speaking, the one thing I will just never accept is a team that doesn't show up to compete. I would have rather watched the garbage time gang for all 48 minutes than the mailed-in effort from the usual suspects in the rotation. At least Paul Reed, Isaiah Joe, Rayjon Tucker, and the rest of the gang would have matched the competitive fire of their opponent.

• Paul Reed has shown plenty of flashes in his limited time with the Sixers, and they stood out even more against Memphis because of how bad and lifeless the rest of the team was. He plays hard whenever he's on the floor, and he does it without it feeling like reckless, misguided energy, which is always the worry with young players and young bigs especially.

My beef rests with their utilization of him. Why pigeonhole him as a four with the "normal" lineups if you're comfortable rolling with him as a small-ball five in garbage time to end the game? An ideal version of Reed brings you somewhat close to the sort of player you want behind Embiid, an athlete who can block shots, run the floor, roll hard, and hit an open jumper or two if the ball comes his way.

Yeah, the Grizzlies were checked out when the starters came back in late, but he did as well (if not better) against Memphis' bigs than any other guy the Sixers played at center on Sunday, so it's not like his lack of size/strength was taken advantage of at any point. Give the kid a real chance and see what happens.

• Here's hoping Tyrese Maxey's late scratch from the lineup due to health and safety protocols was just a moment of abundant caution. Maxey already tested positive for COVID before the season began, so not sure what happened specifically to get him booted from a game at the last minute.

• The Sixers had a golden opportunity to extend their lead to a full game over the Brooklyn Nets in the Eastern Conference standings, and instead are back in a dead heat. Memphis is not a pushover team by any means, but these are the sort of teams they're going to have to beat in order to chase that top spot in the standings.

Losing is one thing. This was a no-show.