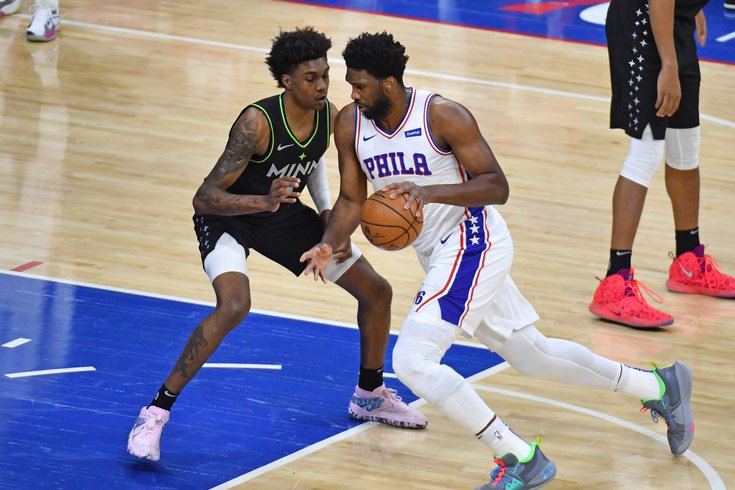 Thanks to 32 points and a parade of crunch-time buckets from Tobias Harris, the Sixers were able to hold off a late rally from the Timberwolves for a 122-113 victory. In Joel Embiid's return to play, Philly continued its winning form.

• Joel Embiid returned to the lineup for the first time in several weeks on Saturday night, and it was the first time the Sixers fanbase got to greet their MVP candidate in person this season. They did not waste the opportunity — he received a standing ovation and MVP chants when he took the floor for pregame warmups, and they made sure to celebrate every positive contribution he made all night to make up for lost time.

The big fella was (understandably) not at his sharpest when the Sixers ran offense for him, fumbling some face-ups and post-ups that he would have punished opponents with earlier this season. But Embiid did a terrific job of impacting the game anyway by picking his spots and not serving as an overbearing presence on a team that spent a few weeks learning how to play without him. A lot of his early offensive contributions were made on the offensive glass and early in the shot clock, throwing his weight around against a small-ish Minnesota team.

(Embiid getting down the floor in transition and forcing smaller Wolves players to take fouls to stop him was maybe the best sign of the night, if you're asking me. He doesn't look super explosive at the moment, but he came back looking to be in pretty good shape, which has always been a question mark for him after layoffs.)

Did he hit his dominant standard on defense? Not really. Towns' shooting ability did force him to reconsider whether he should leave his man to help at the rim at times, which forced other Sixers to swoop in while Embiid tracked his man. And there were definitely some hiccups when he needed to guard in space. But for a first game back I thought he was plenty good, dissuading quite a few drivers and avoiding getting into foul trouble during a choppy game. And Embiid saved his best stuff for last on that end, coming up with a couple of terrific blocks in transition that bounced off of Anthony Edwards for Wolves turnovers.

All things considered, a good start to his post-injury run. Not the sort of game that will win him an MVP award, but he has time.

• Embiid was the returning hero, but it was Tobias Harris who played alpha dog for a lot of this game. Rightfully so — the Wolves are not exactly bulky on the wing, and Harris had the opportunity to "little brother" a bunch of guys (but mostly Josh Okogie) in the mid-post area.

The mid-post fade has been money for him this season, more so than it has been in the past. Harris creates separation by sinking into his defender and shrugging them off, and that bit of space makes it downright impossible to block when he shoots from a high release point while falling away from the basket. But it's not as easy as he makes it look.

That ability was critical down the stretch of this one, with Harris returning from the bench after dealing with foul trouble to bring this one home. It felt like Harris was getting any shot he wanted against any defender the Wolves could get on him. After years of watching opposing wings (read: mostly the Celtics) brutalize them by hunting switches late in games, it has been refreshing to see Harris taking that mantle for Philly this season.

On the other end of the floor, Doc Rivers decided he wanted to have Harris spend small stretches of the game guarding Karl-Anthony Towns, ostensibly to put someone who could chase him a little bit as KAT set up near the three-point line for a lot of the game. Towns certainly got his, scoring a few times with his length in the post, but Harris made him work despite the size mismatch, and he came up with some excellent defensive possessions against Minnesota's best and biggest player.

We've seen Harris hold up on bigs in big spots in the past (most notably when Brett Brown used him on Marc Gasol in the 2019 playoffs), and a matchup like that could be critical for the Sixers in playoff series down the road. Towns is much more spry than Gasol was, and with Harris putting some good possessions against Anthony Davis on tape earlier this season, I'm optimistic they can mix and match some in the postseason.

• One area where I thought Embiid made a big difference was in the dribble handoff and pick-and-roll sets Philadelphia leans on heavily. He's not exactly a dynamic roll man, but Embiid began cashing jumpers on the move in the second half, and that helped ease the pressure on a few ballhandlers initiating the offense for Philly.

After the layoff, the synergy with Seth Curry still looks to be in a good place, and Embiid demanded for the Sixers to run the same set a few possessions in a row in the third quarter after they had success with it the first time around.

• The second unit did not exactly drape themselves in glory against the Wolves, and it was an especially annoying performance because of the implications for the rest of the roster. On the front end of a back-to-back, the starters could have used some more rest and relaxation in the fourth quarter, and they were called back into action because the backups could not get it together.

Shake Milton has actually been pretty decent lately, but certain sequences drive home the need to put a decision-maker alongside him to initiate the offense. He ended the third quarter in spectacularly bad fashion — Milton hoisted a wild three hoping to draw a foul, earned a tech for complaining about the non-call, and the Wolves would score two points on the wild lob play that ensued as a result of his airball on the possession.

The guy who is supposed to be controlling your offense with the second unit just can't do that sort of stuff. It was a momentum-shifting moment that gave the Wolves just enough hope to hang around.

• There were some good moments for Simmons in this game, primarily on some fake dribble handoffs where he caught the Wolves napping, but this didn't feel like a particularly impactful game for him on either end of the floor. Anthony Edwards felt like a victim of his own shot selection at times, because he was able to create separation quite often throughout the night.

Some of that was due to a problem we haven't seen impact Simmons often. He got hung up on a lot of screens trying to track Edwards around screens from Towns, which is almost never an issue for him on the defensive end of the floor. Edwards is a terrific athlete in his own right, so when he was able to find those pockets of space, it was difficult for Simmons to recover back into position to make a difference.

That led to some gambling that Simmons has largely cut out of his game in the second half, and Edwards punished him for that, too, bouncing to the bucket for some free looks at the rim.

• Not sure what the Sixers were thinking with some of their defensive decisions in the second half, but leaving Karl-Anthony Towns alone on the perimeter to bomb away from three is not the move. He has been a high-level shooter for basically his whole career, and he was feeling it from deep. Somebody needs to read the scouting report better.

• The officials were all over the place in this one. Handing out quick techs for what felt like dubious reasons, whistle-happy from the very start of the game

• Listen, it was Embiid's first game back, and he has publicly humiliated Karl Anthony-Towns on many occasions in the past. But this was a legitimate poster on a guy who doesn't get dunked on often:

oh here we go. we know the history. KAT dunks all over Joel Embiid. pic.twitter.com/hRcPQYnMLD

Tough break for the returning Philadelphia hero. But that's the price you pay for actually attempting to play defense, which is why KAT has avoided being on the receiving end of too many of these. When Embiid threw a post move on Edwards with Towns on the weakside helping in the fourth quarter, his opponent didn't even feign an attempt to contest the shot.

Embiid wouldn't get the thunderous payback Philadelphia fans probably wanted, but he did draw a foul on an and-one bucket later in the quarter, and he celebrated it in, well, classic Embiid fashion:

The Sixers are not just better with Embiid, they are more fun when he is available. It's an entertainment business, after all.

• I don't know what the hell happened to the speaker system at Wells Fargo Center, which is already insanely loud relative to other arenas around the league, but the horn sounds busted as hell right now. Somebody, please get a maintenance man on the case before they blow everyone's eardrums out.