NBA power rankings roundup: Where do the Sixers stand now that Joel Embiid is back? 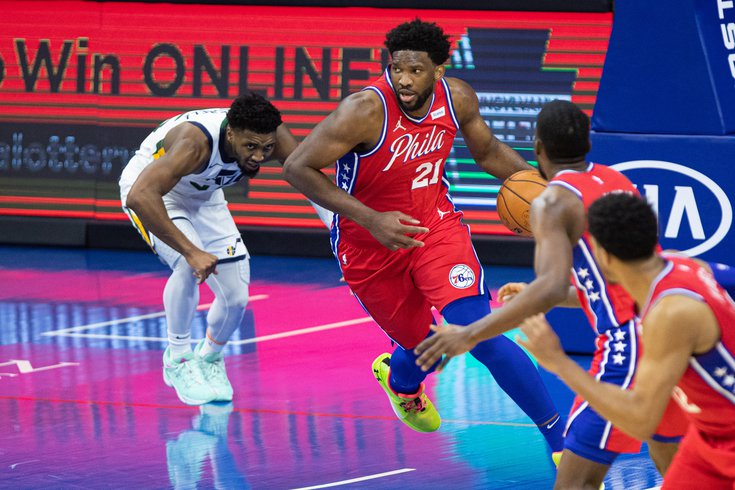 It wasn't the best week for the Sixers, with the team losing multiple games in the same week for the first time since mid-February. It's not entirely their fault though, as the team was coming off not just an extended stretch without their best player — and MVP candidate — Joel Embiid, but were also wrapping up a six-game road trip.

It wasn't all bad news for the Sixers, however, as both of those trends came to an end this weekend when the team returned home to the Wells Fargo Center and Embiid returned to the lineup (albeit only for the first leg of the weekend back-to-back as Philly opted to hold their star out of Sunday night's game in order to ease him back into game action).

Most importantly for the Sixers, however, is that they were able to weather this rough stretch while still holding on to a tie with Brooklyn for the top spot in the Eastern Conference. And the schedule improves for Doc Rivers' squad this week. Despite them heading back out on the road for their next four games, the competition should be a bit lighter, as their face four straight teams who are largely on the playoff bubble at the moment (Celtics, Pelicans, Thunder and Mavericks) before heading home for a tough two-game stretch against the Nets and Clippers.

Now we're getting a little bit ahead of ourselves, as the Sixers will need to keep up their winning ways if they hope to reach that matchup with Brooklyn still tied for the lead in the East.

The up-and-down week, one that saw the Sixers go just 2-2, didn't have any impact on the team's current NBA title odds, according to Pa.Unibet.com, but some of the other teams near them saw a slight change. Here's a look at the latest, as well as each team's current winning percentage for comparison purposes.

As you can see, the oddsmakers currently have the Sixers in sixth place when it comes to their title chances. So, how does that compare to various outlets' most recent NBA power rankings? Turns out, it's pretty spot on.

Here's a look at the latest batch of power rankings from across the internet, which features an almost unanimous slide from the local team. Guess it's a good things they just got their MVP back...

The week might have ended with a thud thanks to a loss to the Grizzlies on Sunday night, but all that truly matters for the Sixers is that Joel Embiid is both healthy and back in the lineup. The Sixers remain tied atop the Eastern Conference with Brooklyn in time for a trip to Boston to face their rivals Tuesday night on national television. -- Bontemps  [espn.com]

The Sixers went 2-2 this week, but the big news was Joel Embiid making his return to the court in Saturday's win over the Timberwolves, in which he put up 24 points and eight rebounds in 29 minutes. He sat out Sunday's loss to the Grizzlies since it was a back-to-back, but Philadelphia has to be extremely excited about what they saw from Embiid in his first game back after a three-week absence.  [cbssports.com]

Watching the Philadelphia 76ers weather the storm during the absence of Joel Embiid is the best case that the team is a title contender yet. As the presumed MVP favorite sat on the sideline Philadelphia the rest of the Sixers won seven of their 10 games and have stayed at the top of the Eastern Conference. [...]

Embiid came back last night and looked like his pre-injury self. In 29 minutes he posted a line of 24 points, eight rebounds, two assists and three blocks. If he can remain healthy the rest of the way the Sixers will be the biggest threat in the Conference to the Brooklyn Nets. As good as the Nets are on offense, they do not have anyone who can make life tough for Embiid. That is the matchup basketball fans deserve.  [hoopshabit.com]

The Sixers went 7-3, with the league’s No. 1 defense, over Joel Embiid’s 10-game absence. That overall success probably hurts his Kia MVP candidacy, but his team certainly missed him as the MVP front runner and the Nuggets turned a 44-22 first quarter into an easy win in Denver on Tuesday. Only one of those seven wins came against a team that’s currently more than a game over .500, and that was against the shorthanded Lakers. [...]

Embiid ended up missing both of his team’s games against Nikola Jokic, but he made it back in time to face the Celtics, against whom he totaled 80 points over two games in January, on Tuesday. The Sixers have another back-to-back later this week, so they’ll likely play in Oklahoma City without him.  [nba.com]

Joel Embiid made his return last week against Minnesota, and it could not have come at a better time. As well as the Sixers did without him, going 7-3, it was not enough to keep them in the top spot in the East.  [...]

Embiid sat out the second game of the back-to-back against Memphis and the Sixers got clobbered. It was a bad enough performance that it brought the boos out of the few fans that were in attendance.

Even though Philadelphia was without Embiid, a 16-point loss to the Grizzlies is going to drop it out of the top five of the rankings.  [bleacherreport.com]

Should this team shoot more 3-pointers, or is the balance just having Joel Embiid back? I’ve been curious about the balance of a Daryl Morey team married to a Doc Rivers team. The Philadelphia 76ers are a fascinating look at the two philosophies. Morey has often just been associated with 3-point shooting, when he’d tell you that he’s all about winning and efficiency. The 3-pointers just happen to usually be one of the more efficient options. Rivers’ teams normally don’t shoot a high volume of 3-pointers. Right now, the Sixers are tied for 12th in the NBA in 3-point percentage, but they’re bottom five in 3-point volume. Do the Sixers need to put up more 3-pointers, especially after acquiring George Hill? Or does Embiid’s presence back on the court create the efficiency gap the Sixers seek under Morey? I wouldn’t be shocked if the Sixers start gearing up toward more 3-point attempts to space for Embiid.

Why are they ranked here? They beat the two bad teams on the schedule this week but lost to Denver and Memphis. Not a bad week, but it will cost them a spot.  [theathletic.com]

Is there something wrong with Ben Simmons?

In 11 games since the All-Star break, Simmons is averaging 12.9 points on 45.5 percent shooting from the field. Within 8 feet of the rim, he’s shooting 48.1 percent, down from 63.1 percent over the prior 22 games. Sixers fans are fed up and confused. Simmons was playing with more aggression on offense than ever before. He attacked the rim with force. He seemed mad. Not anymore, though. He seems timid. He lacks power. Something is up. [...] I haven’t heard a peep, but a physical issue would explain these struggles.

Otherwise, it’s hard to figure out. Simmons’s intensity comes and goes. It always has. But during Joel Embiid’s 10-game absence due to a knee injury, it would have been great to see the Sixers develop some chemistry with Simmons running the show. Philadelphia is scoring only 107.2 points per 100 chances in the half court when Ben Simmons is on the court without Embiid, according to Second Spectrum. That would rank 22nd in the league. The Sixers need to be better in those non-Embiid minutes to be the best team they can be in a playoff series. The East will not be easy.  [theringer.com]