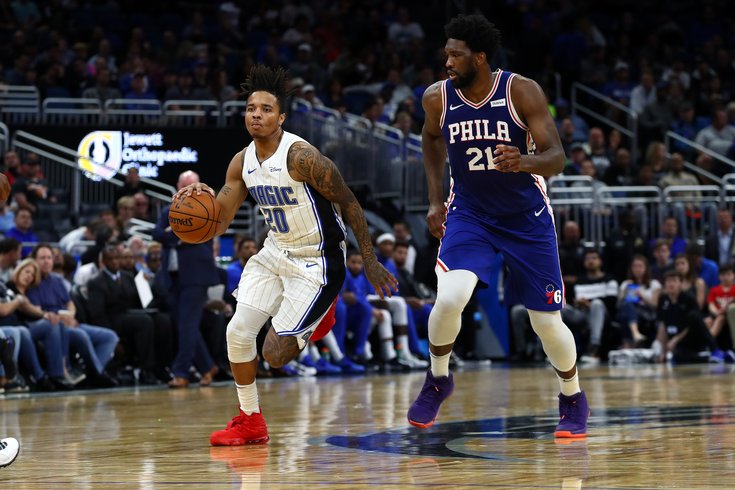 The Sixers followed up their best win of the season with a predictable bummer in Orlando, losing a stinker to the Magic 98-97.

• The top of the Sixers' rotation needed someone to give them a shot in the arm to avoid a letdown following the big Christmas win. Trey Burke was a terrific candidate to do so as he tries to solidify his spot in the rotation, and he made positive contributions at both ends of the floor in the first half.

Most people expect a good Burke performance to feature scoring exploits, though it was his work defending D.J. Augustin that jumped out most to me on first watch. The Magic give their veteran backup a lot of rope with which to work running the second unit, and Burke held up well against him, moving his feet and contesting well when Augustin tried to attack the rim.

• Tobias Harris must absolutely love going up against any team he has played for previously. On Friday night Harris often drew a tough matchup with Jonathan Isaac, who has turned into one of the game's best young defensive talents, but he managed to do well enough against Isaac to keep the Sixers afloat in the middle of a tough night for the team.

Harris' versatility just makes him very tough to guard on a talented roster like this one. Collapse too hard on post-ups, and the ball can eventually find its way to him for an open three. Slack off when he's away from the ball, and one of Philly's passers can hit him as he's cutting for an easy layup. He posted players up out of timeouts and made good use of the mid-post, and perhaps the answer on Friday was just to simply go to him more often than they did.

• I don't think it would be totally fair to say this was about a "letdown," as I thought Philly's defensive energy was pretty good for long stretches of the game on Friday. Some dips at times for sure, but they didn't lose the game because they weren't competing at the defensive end. Guys who I thought were poor on offense, Ben Simmons specifically, still competed hard deep into the game in spite of how easy it would have been to just pack it in.

It was just a tremendously bad game for them on offense, and unfortunately, it is hard to overcome sucking that hard at scoring for an entire game. So I wouldn't go so far as to say this was a "letdown" so much as it was

• Coming off of Joel Embiid's best two-way effort of the season, the Sixers made it a point to play through him almost exclusively for the first five minutes of the game. While I'm always wary of trying to shoehorn the entire offense through one guy, I'm a bit surprised they don't do this more. The quicker you make sure he is engaged, the better off you're going to be over the course of a full game.

He was far from the guy he can be on the offensive end of the floor, but Embiid did some little things that should serve as great lessons on film. Embiid is a tremendous rebounder, but there are times when he's plucking those down because he's simply the biggest dude on the floor, with some bad positioning/box-out habits lingering. There was a play in the second quarter where he drew a loose ball foul on Khem Birch simply by beating Birch to a spot and establishing position, which is something he can and should do regularly. Plays like those add up to wins when you don't have your best in other areas.

On the negative side — Embiid ended up settling for a lot of jumpers against the Magic, failing to find the balance between imposing his will and taking what the defense gave him like he did against Milwaukee. And unlike in recent games, Embiid struggled to take care of the basketball, contributing to a team-wide problem that allowed Orlando to keep pace in spite of their own struggles on offense.

• Al Horford looks better on the defensive end than he did as recently as a week ago, but he was a big fat nothing on offense against Orlando. Couldn't knock down jumpers, couldn't take advantage of some huge mismatches on the low block (the man had Terrence Ross guarding him and missed a bunny), but worst of all, he just couldn't seem to find his place on the floor and faded into obscurity for most of the night.

I didn't think he had a particularly bad night on defense, but there were a few sequences where his decisionmaking was surprisingly off. He made a half-hearted attempt to contest an Orlando three in transition during the second half, and it left him too far from the shooter to bother the attempt and then too far from the rim to clean up the ensuing rebound, which Orlando deposited for two.

We're just days removed from seeing how valuable Horford is and can be in the right matchup. But his set of skills can get lost on this specific team in a way a guard's would not, so these nights happen more often than I'm sure the Sixers would like.

• I don't tend to get fired up about turnovers as some of you do, but the Sixers had some absolutely brutal turnovers against Orlando. There were a handful of travels that probably inspired a few eye-rolls from the bench, and you would think it would be easier to throw passes to guys from 10 feet away. Furkan Korkmaz had some particularly awful missteps on Friday, getting called for an up-and-down in the first half and then rifling a ball off of Horford's shins in the second half.

This is what tends to happen when you only have so many guys who can actually dribble. When you're as reliant as the Sixers are on perfect passing to create looks on the second unit, you're inevitably going to ask guys to play beyond their comfort zones and ability levels.

• One coaching nit to pick — the Sixers' inbounds play they tried to run down three that led to a turnover in the final minute was flat terrible. Someone could have gone into the backcourt to receive an inbounds pass if need be, and instead, Simmons threw a dumb, dangerous pass that went the other way. Brett Brown has run some great late-game stuff, but that was a trainwreck.

• When Ben Simmons is at his worst in a halfcourt setting, you can almost see the gears turning in his head as he tries to make plays. Nothing about trying to score looks or feels natural for him, and so when he tries to play bully ball in the post or hunt for his shot, it often just wastes a lot of time on the shot clock and ignores options that emerge around him.

The matchup he seemed intent on attacking didn't make a whole lot of sense, either. Simmons kept trying to post up Aaron Gordon, who may have many issues as a foundational piece but is certainly not at much of a physical disadvantage against Simmons. You would assume Simmons or the Sixers would have figured this out at some point, but instead, they kept trying to prove the strategy would bear fruit for reasons I don't entirely understand.

(His defensive energy late in the game was excellent. But it was too little, too late, and it didn't offset his issues on the other end of the floor.)

• The Sixers can only give away so many of these games against lesser competition before they can kiss their chances at a decent seed goodbye. This is not the old Eastern Conference where you can sleepwalk your way through the season and stumble into one of the top seeds. The teams ahead of (and around them) in the standings have mostly been stomping the teams they need to, and that is going the force the Sixers to play lights out basketball against the conference's better teams in order to climb the ladder.

Are they capable of doing that? Absolutely. But they're doing themselves no favors. Everyone can see what a difference homecourt makes for this team, yet it seems clear they're not going to be able to muster what it takes in the regular season to have it when it matters.

• Some good and some bad from Josh Richardson against Orlando. He picked up some mind-numbing fouls, which I suppose I have grown accustomed to the more I have seen him play for Philadelphia. For a guy who can reach the heights he can as a defender, Richardson sure seems to string stretches of dumb defense together pretty often, and dumb play on both sides of the ball for that matter.

His pick-and-roll play is not much different, swinging back and forth between encouraging and mystifying. The chemistry he has shown with Embiid in recent games is a good early sign, but he's just as liable to toss up an airball on a floater as he is to hit the big man for an easy bucket around the basket.

• The Sixers need one role player off of the bench who is just consistently good, or at least average, on a night-to-night basis. Those are hard to find, but the variance of their backups seems absolutely absurd for a team that wants to win a title. One night Furkan Korkmaz looks like Reggie Miller, the next he looks like he's playing basketball while wearing ice skates. James Ennis' swings have been brutal lately as well, with his offensive rebounding the only thing the team can count on nightly.

And Mike Scott has been outright bad this season, mostly just standing on the perimeter to launch awful bricks. They need an upgrade here before the trade deadline passes, almost regardless of where it comes.

• The Sixers tried to defend Markelle Fultz the same way many teams did when he was in Philadelphia, sinking all the way back to the paint when he had the ball on the perimeter. He took (and even made!) some of those while being actively disrespected, and even if he made it look like pulling teeth at times, I'll be honest, it sure looked like an easy ask of an NBA player to shoot open jumpers.

• Everyone loves to wax poetic about how the NBA playoffs are "a different game," and that's true. It's partially because the NBA makes the conscious choice to let more physical contact go in service of letting the players decide the games. They do the same on special occasions, such as on Christmas Day, when they want to showcase the product.

So someone will have to explain to me why they don't just do this year-round, and why I have to watch officials call a bunch of useless, ticky-tack fouls in games like Sixers-Magic on a Friday night in late December. It's useless, it's not entertaining, and no one asked for it.