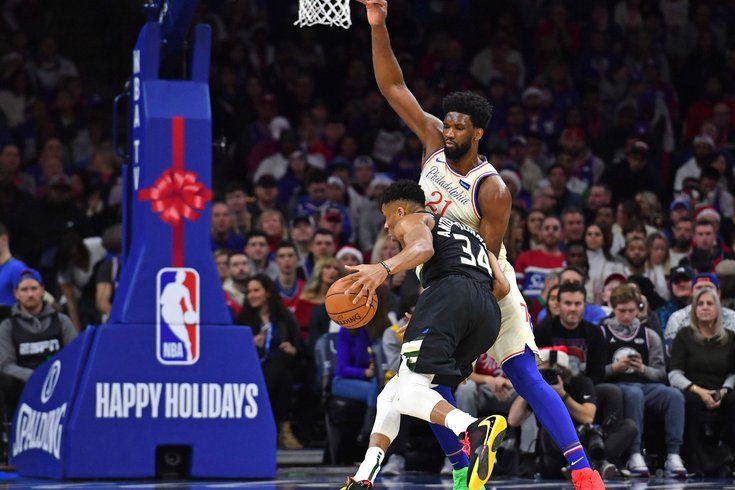 The Sixers dominated the Milwaukee Bucks from start to finish, and Joel Embiid led the Sixers to a statement win on Christmas Day, 121-109.

Here's what I saw on Wednesday afternoon.

• There was no doubt the Sixers were going to bring playoff-level intensity to the start of the game. Milwaukee's presence all but guaranteed this, but getting off to a good start has never been an issue for these Sixers — sustaining is the name of the game.

The home crowd was a big reason I thought the Sixers were able to maintain a consistent level of energy against the Bucks throughout the game. That was a playoff-level atmosphere, as it should have been against another contender. Good job by everyone who was in attendance on Wednesday.

• Does anyone doubt how much this game meant to Joel Embiid? That is the best we have seen from him all season, Boston Celtics game included. It combined the offensive aggression everyone wants to see from him with an unbelievable effort to keep Giannis Antetokounmpo frustrated throughout the game.

Few guys in the league have the strength to stand up against Giannis when he takes them down to the low block, and Embiid is one of them. The plays that usually turn into easy Giannis dunks or cheap fouls around the basket never materialized, with Embiid forcing him into an array of fadeaway jumpers in the post or walk-up threes in semi-transition.

On the other end, Embiid did an excellent job of navigating Milwaukee's defensive coverage, which concedes a lot of open threes to centers by design in favor of packing the paint. While I'm a proponent of Embiid getting up threes (particularly open ones), you don't want the offense to devolve into a jump-shooting exhibition for a big fella. He found a happy medium, taking and making a few threes without ignoring the paint, even putting Giannis on his ass with some deep post seals.

That is the level he is capable of getting to. That is why it is so frustrating for fans and media alike when he turns in uninspired efforts against good and bad teams alike. When he is up for the occasion, Embiid is capable of throwing the league's reigning MVP (and likely back-to-back winner) into a trash compactor. They can single cover a guy almost no other team can, undercutting his drive-and-kick game and turning him into a scorer first, second, and third.

(One footnote: I didn't think Embiid got rewarded for a great passing day. We have talked plenty about his passing out of doubles this season, but he fired off a few dimes on the move Wednesday, which is usually a total adventure for him.)

• Al Horford will not get the same level of love and appreciation as Embiid will for his contributions on defense, and I think that's fair given their respective evenings. But he is an essential part of stopping a guy like Giannis — Embiid has to get some rest, of course, and being able to put one of the best Giannis defenders in the league on him as a backup plan is a hell of a thing for the Sixers to be able to do.

A good time for everyone to be reminded that this is a team built for the playoffs, not regular season games in December. And since the Sixers expect to see the Bucks at some point in the future, Horford's presence makes a lot of sense when you watch these two specific teams go to war.

• One guy who benefitted greatly from the level Embiid played at? Josh Richardson, who had an electric first half as a scorer on Christmas. He has not been the most comfortable and confident shooter since falling on his wrist in Boston a couple of weeks ago, but he let it rip against Milwaukee to great effect.

Beyond the hot shooting, Richardson showed signs of improving chemistry with Embiid in pick-and-rolls, snaking around his screens and using him as a great decoy to set up his own offense. He even found Embiid for a rare lob finish in the first half, showing there may be a much higher level these two can hit together by the time the playoffs arrive.

• Ben Simmons did not draw the A1 assignment on Wednesday afternoon, but his intensity level on defense was as good as it has been all year. He made all sorts of little plays around the margins, stripping the Bucks with late help, executing switches beautifully, and imposing his will physically at times, including on a first-half play where he ripped a ball straight out of Giannis' hands to give the Sixers an extra possession.

Simmons did not do a whole lot of attacking through the first three quarters, but he repeatedly did the little things around the margins to make a difference. A good pass that led to free throws, an effort save, a good screen in a rare opportunity to be a roll man in the P&R, and he closed space on defense with gusto all afternoon. It's a lot harder to tell this from the sidelines, but I also thought he seemed to do an excellent job as a communicator, organizing the Sixers in areas like transition defense. Embiid is more often than not the leader and organizer on that end, but with the big man tasked with a huge matchup, Simmons appeared to pick up the slack there.

As I said after his best box score game of the year on Monday, the numbers don't tell me that much with Simmons' play. The tape from that game, though, would tell you everything you need to know. Simmons was excellent. Throw in some excellent finishing to help close out the game in the fourth quarter, and he had himself a day.

• The Milwaukee Bucks basically do not play zone defense. They were getting shellacked so badly on Wednesday afternoon that they resorted to playing it against Philly, and Furkan Korkmaz made it his personal mission to embarrass the Bucks for breaking from their usual style, knocking down a trio of triples in the third quarter that sent the home crowd into hysterics. When maligned rotation players like Korkmaz are feeling it, you know there is some serious juice flowing.

(By the way, I thought he rose to the defensive occasion just as the rest of his teammates did. He's starting from a much lower point, so he still got burnt a few times, but his compete level was excellent.)

• Watching James Ennis chase down offensive rebounds he has no business getting to is one of the great joys of covering this team. On at least 50 percent of the plays where he comes up with an offensive rebound, I am convinced he is just wasting his time. And yet there he is, emerging from a pack of players with the ball in his hands, ready to reset the offense.

• If Tobias Harris had more nights from three like this one, the Sixers would probably be close to undefeated. Harris was more of a secondary figure on Wednesday, but he buried a bunch of threes and made the Bucks second-guess any decision to cheat off of him. That's basically the ideal scenario for this group.

• Mike Scott is having an absolute nightmare of a season. He's rarely making shots, and often times when he tries to do anything else, he is killing Sixers runs.

• Yes, the Sixers coughed up a good chunk of a big lead as the Bucks buckled down and played some zone defense, but I am not inclined to spend too much time killing them for that on Christmas. The Bucks hit some tough shots and there was a small letdown at the end of a big win. It happens.

• This is, and I don't say this lightly, the whiniest take I have seen from a professional basketball writer this year:

Philly fans yell "SUCKS!" after every Bucks player is introduced. Villanova product Donte DiVincenzo got a few scattered cheers and claps. Giannis drew the strongest response -- and unlike most places it wasn't positive.

They famously booed Santa in this city, so it makes sense.

What did you want a home crowd on Christmas to do, cheer for the best player on the team that appears to be the biggest obstacle in the East between them and the NBA Finals? The fans that cheer for opposing players do so most often because their team isn't relevant. Grow up, Peter Pan.

It's not a tea party, it's professional sports. Save the civility for somewhere it matters.