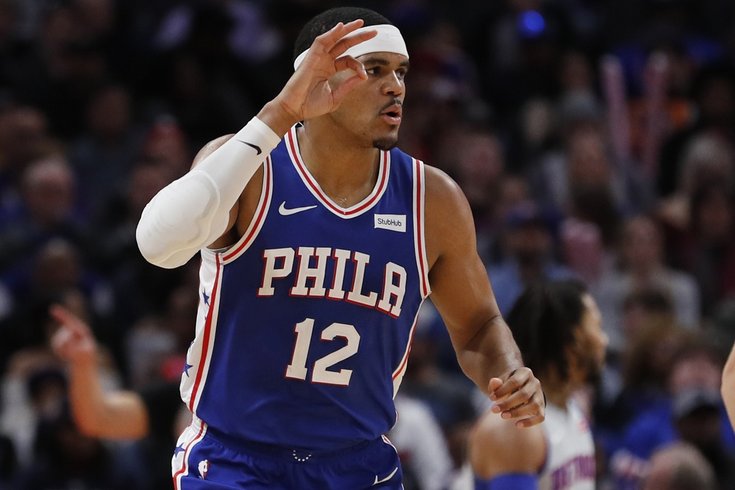 Philadelphia 76ers forward Tobias Harris (12) celebrates a three point basket in the first half against the Detroit Pistons at Little Caesars Arena.

Tobias Harris had a terrific night against one of his former teams, and the Sixers earned an easy win over the Detroit Pistons on Monday night, 125-109.

Here's what I saw in the win over Detroit.

• Tobias Harris sure seems to love playing the Detroit Pistons. His first statement game of the year came in Philly's second game of the season, a 29-point effort that powered the Sixers to a win that night, and he picked up where he left off in Monday night's win.

A guy who deserves some credit for Harris getting going? Ben Simmons, who got Philadelphia off to a fast start (quite literally) by pushing the tempo off of misses and getting downhill as a driver. At least a couple of Harris' early makes were open as a product of Simmons drive-and-kicks, and Simmons found a nice middle ground between getting his teammates going and looking for his own shots at the rim.

Harris, of course, did plenty of damage on his own. He is quicker than both of Markieff Morris and Blake Griffin and showed it when the Pistons would single-cover him, picking up some easy baskets at the rim with cuts and drives alike. And he made easy work of Svi Mykhailiuk on the low block, backing him down repeatedly so he could shoot short jumpers over his head all night.

During a brief stretch in the second quarter, Harris and Simmons showed why I have always believed they need to democratize their transition game. With Harris bringing the ball up midway through the second quarter, Simmons took off and beat Derrick Rose down the floor, eventually making a terrific play to finish a lob.

Transition is where Simmons thrives, and it doesn't have to be with the ball in his hands every time. This underscores another point — the more ballhandlers they can get on the floor, the better. Those two played well off of each other all night, and it went a long way toward earning the victory.

• Just to make sure it doesn't seem like I'm bundling those two together completely, that's a great example of a Simmons game that just simply felt different from some of his other box-score stuffing nights. The numbers are gaudy but if you set aside the stats, you could see he wasn't leaving opportunities on the table when lanes opened up for him, and Simmons was aggressive on the offensive glass in a manner similar to Saturday's win over Washington. Both of those are areas where he is in control of his own destiny. Assists are going to come and go depending on how well teammates shoot, and he could still have excellent games like the one he had against Detroit.

The bench units built around him were excellent on Monday, and I think that was a reflection of how well he played as much as anything else. Instead of trying to force things that weren't there, he did an excellent job of absorbing pressure and then making the right read from there. I don't care too much about the triple-double, it's the manner in which he got there.

• If Joel Embiid got to go against Andre Drummond every single night, he would probably win an MVP award. Talk about having a guy's number. Embiid baits him into fouls while he's establishing position, he baits him with rip-through fakes that set up hooks and layups, and he punishes Detroit whenever they try to send help Drummond's way, hitting open guys for layups and threes.

Embiid looked tremendous early on for a guy who missed shootaround due to illness and was questionable to play. The Pistons started Thon Maker instead of Drummond as a disciplinary thing, and Embiid made the most of the opportunity, picking up some offensive rebounds early and putting himself on the free-throw line. The energy he showed on offense carried over to the other end, where he cleaned up a few blown assignments by waving his wingspan in the face of would-be scorers.

It wasn't a particularly high-volume night for Embiid, but this is what the Sixers can look like when their best players all bring their strengths to the table at the same time. They've had few nights with several starters excelling all year, regardless of the opponent, so you take them when you get them.

(And, by the way, they got to rest him for most of the fourth quarter with a comfortable lead, which is always great news.)

• The Sixers could use more Al Horford performances like that. Didn't play a huge role on offense for Philly, but he hit timely shots, made some excellent passes to cutters, and looked a little better on defense than he had over the past week.

• Figuring out a way to replace Matisse Thybulle will be critical for Philadelphia to get through the next two weeks (and possibly more), and while Furkan Korkmaz is never going to replicate his defensive efforts, he gave the Sixers some needed offensive punch off of the bench against Detroit. Korkmaz shook off some early misses and just kept coming, personally leading a mini-run for Philly late in the third quarter.

Does it give him a bit of a lift knowing that he basically has to play minutes with Thybulle out, solidifying his place in the rotation? Was it just a nice shooting night? Who knows. It was a welcome sight for Philly either way.

And everyone welcome back James Ennis, who fell into a funk last week and contributed in a big way against the Pistons despite how poorly he shot on Monday. He was absolutely everywhere in the first half against Detroit, creating extra possessions through effort alone. It would be nice, of course, if he actually did something with those possessions himself — Ennis had some ghastly misses around the rim.

• After finally breaking out of an offensive slump against the Wizards, you might have thought Josh Richardson was out of the woods. Not so fast, my friends. Richardson was the victim of Philadelphia's touches going elsewhere against Detroit, sure, but he wasn't exactly electric with the ball in his hands.

Richardson is the guy who should be expected to help lift the bench units built around Embiid, and the few nice plays he did make on offense were almost all due to Embiid's screens in pick-and-rolls. But his touch was off outside of that, and the Sixers are still waiting for him to string a few games of solid offensive play together.

• I don't think I need to go much more in-depth than this, but there's a reason Trey Burke was available and willing to sign a partially guaranteed deal with the Sixers this summer. He is not good.

Burke did everything you can't have a role player do at once on Monday night. Bad fouls on jump shooters, missed looks with nobody guarding him, lackadaisical focus on the defensive end, it all came together in miserable fashion. As I've said before, if you're spending much time getting frustrated because he or Raul Neto are playing over the other guy, take a deep breath and use that energy on something that really matters.

• Blake Griffin looks like a shell of himself physically, and it is pretty sad to see. One of the game's most electrifying athletes is suddenly nowhere close to that class, and even with the improvements he has made to his game elsewhere, it shows. Pretty big bummer.

Maybe that's why he took out some frustration on Tobias Harris late in the game, who never gets into scraps with almost anyone.