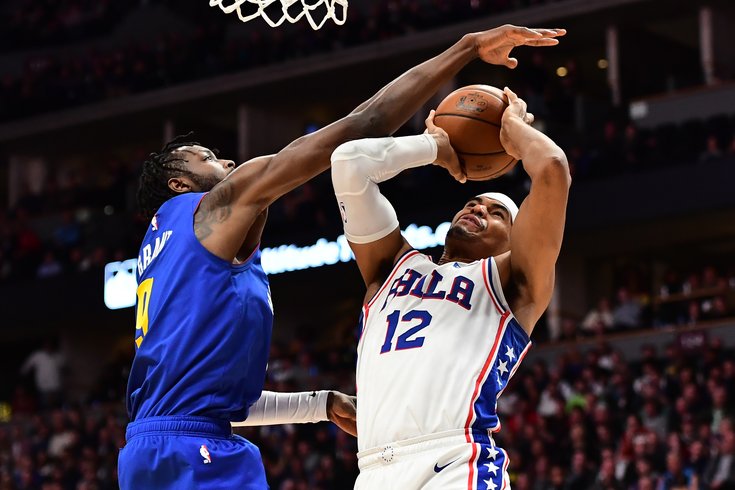 The Sixers looked to be on their way to a comfortable road win in Denver on Friday night, but the wheels came off in a nightmare fourth quarter, and the Nuggets sent Philly home with a downright embarrassing 100-97 loss instead.

• In an era where we see a lot of guys duck out of the way to avoid getting dunked on, you love to see plays like this from Joel Embiid:

There are plenty of critiques you can make of the big fella, but he takes his responsibility to protect the rim as seriously as anyone in the league, even when he's at risk of being put on a poster. I guess when you're able to turn away drives like this, you lose the fear that drives a lot of his peers around the league.

• James Ennis' acrobatic finishing in transition is one of my favorite small Sixers things. He's not a particularly graceful player in a halfcourt setting, mostly because of his handle, but he somehow manages to come up with some absurd makes with guys draped all over him after the Sixers force turnovers. If the Sixers could put his finishing package in Matisse Thybulle's body, they'd have an All-Star caliber wing.

• Regular readers are familiar with my advocating for Raul Neto, who continues to give the Sixers solid minutes every time he is given an opportunity. Let me amend that to say the Sixers need to play as many backups who can dribble as they possibly can because Trey Burke got into the lineup on Friday night and he absolutely balled out in his first chance at real minutes.

You really notice when guys on this team do "guard things" because there has been such a dearth of good guard play in Philly for years. Burke dribbled the Sixers out of late-clock jams, split Denver attempts to blitz on pick-and-rolls, and perhaps most critically, took and nailed open threes when they came his way. He showed off some excellent chemistry with Kyle O'Quinn in particular, finding Philadelphia's backup big man for some easy buckets around the rim.

Meanwhile, Neto continued shooting the lights out from deep during his minutes, and though he struggled to get downhill in comparison to Burke, he brought plenty to the table with his passing and defense in the pick-and-roll, and he has shown a surprising amount of comfort as an off-ball cutter early in the season.

While I still give Neto the leg up in this battle for defensive reasons, I give credit to Burke for competing hard on defense on Friday night. He'll still have the same size concerns in different matchups, but you can only control your effort, and he did exactly what you'd want to see from any bench guy fighting for minutes — he played his ass off.

It should be clear in any case that Brett Brown needs to give his guards minutes, no matter which one he decides on for a given night.

• Confidence is a powerful thing, especially in a sport where even the best shooters have to ride out cold streaks that feel like they'll never end. Was Furkan Korkmaz's game-winner in Portland the catalyst he needed to finally get rolling from deep? It sure looks like it right now, and if he's able to even come close to replicating this over time, he's in the rotation for good.

Korkmaz is shooting with absolutely no fear right now, and he looks like a guy unburdened by pressure or expectations when he's on the court, a stark contrast from his minutes in seasons past. He's making threes with players in his face, he's using pump fakes to bait defenders into flying past him on contests, and he's showing the talent that [General Manager's name redacted] saw when he drafted him in the first place.

The bomber Brown has been looking for has arrived.

• What a rare occasion this is, we get to talk about another bench standout, Kyle O'Quinn. With Embiid and Horford both struggling to get going early, you wouldn't have bet on their third-string center to come through with the best performance in the first half. But that was indeed how it went down, with O'Quinn benefitting from the improved guard play while also creating some of his own luck.

Was his outside shooting unsustainable? Probably. But the Sixers had to be thrilled to be on the other side of a hot shooting night from a deep-bench big, having been tortured by a litany of non-shooters over the past few years.

• Josh Richardson didn't follow up his big night in Utah with a good offensive game in Denver, but he came up with some absolutely terrific defensive plays when the Sixers needed them most. His block of Jamal Murray at the rim rivaled Embiid's first-half block for the defensive highlight of the game, and with Philly on tilt, on the verge of completely coughing up their 21-point lead, it was Richardson who came up with a critical steal to give the Sixers some breathing room.

• The coach's challenge that followed will be the thing people focus on, but Philadelphia's defensive possession with around 1:30 to play is the leader in the clubhouse for their best team possession of the season. Phenomenal rotations by everyone involved, even though a terrible foul call nullified the possession.

• Good lord, was that a horrendous offensive performance from Joel Embiid for the first 2.5 quarters. Bad fadeaway jumpers? Check. Standing around with the ball in his hands, draining the shot clock? You bet. Turning it over as a result of overdribbling? You get where I'm going with this.

Every bad habit Embiid has was on display at once, and what's worse, he did nothing to adapt as the game wore on. The turnovers he committed in the first half kept coming in almost the same exact way in the second half, with Embiid needlessly putting the ball on the floor on several occasions and getting burned for it. For a guy with serious size and athleticism advantages against a lot of the guys he's matched up with night-to-night, he rarely seems like he's interested in using them. Eight turnovers is just unacceptable from Embiid at this point in his career.

I put some of his night on Brown, too, as other Sixers were having better evenings and could have been trusted with more offensive responsibility at the time. You don't want to have Embiid disengage on defense due to a lack of touches, but you also can't keep beating your head into a brick wall.

The difference in the game was Jokic outplaying Embiid when it mattered, even though neither guy was particularly great for most of the night. If you want to be called the franchise player, you have to step up to the plate when you're missing players to injury and/or in a matchup against an elite peer, and Embiid fell well short of the mark.

• The Sixers shot the lights out from three for most of the night and then couldn't seem to make a free throw if their lives depended on it. It could have easily been a blowout early in the third quarter if not for their charity-stripe struggles. Think they regret that in a game decided by three points.

• A lot of people get on Brown for his use (or misuse, as it were) of timeouts, and I was not a fan of how he handled the beginning of the fourth quarter with Denver trying to throw one last haymaker to get back into the game. There were opportunities to call timeouts after the Nuggets cut the lead to 16 points and 14 points and stop the bleeding before they really got rolling, but Brown let it go a little while longer, and the Sixers were punished with a Nikola Jokic three to cut the lead to 11.

When you're on the verge of putting the game away, I think you should call the timeout sooner rather than later when things get even a little shaky. Instead, the Sixers found themselves in a game again, and they thrived in chaos while the Sixers wilted down the stretch.

Look, it's on the players to execute down the stretch and not let it get to this point, too, but that avalanche should have never gotten started. You have to have a feel for when things are getting out of control, and Brown didn't show that whatsoever. A 35-13 fourth quarter is a complete team failure, and Brown did nothing to slow things down.

• I think the thing that will hurt most for the Sixers looking back at that loss is that a lot of Denver's points in the comeback came on plays the Sixers did good work to break up. The Nuggets made a wide variety of circus shots, contested looks, and shot themselves back into the game without the Sixers doing too much wrong defensively.

Basketball is a game of runs, as the old saying goes, and the work should have been done early on to prevent a fourth-quarter run having that big of an impact. You take care of business the way you're supposed to, and you're coming home from the road trip feeling good about yourselves after splitting a tough set of four games. Instead, all sorts of old wounds were re-opened that we'll get to yell about for a couple of days, and they have no one to blame but themselves.

• Calling Embiid for a push-off on Philadelphia's last chance to score was, uh, quite a decision, let's leave it at that.

• I have seen Al Horford make the three he attempted at the end of the fourth quarter probably 75 times against the Sixers, and I think he shot 90 percent or better on them. Missing is one thing, but that airball was especially brutal, and it punctuated a bad night for Horford offensively overall.

• You don't want to mess with success, I suppose, but Furkan Korkmaz could use a better look than the big, yellow Nikes. Ball out in style, young man.

• Nikola Jokic's gut. I know not everyone shows up for the season in peak physical form, but that dude's fitness is absolutely embarrassing for a guy who is supposed to be one of the league's best players. This is what I think of when I watch Jokic waddle up and down the court:

But hey, credit to that guy for coming through when it matters. He outscored the Sixers by himself in the fourth quarter. Imagine how good he would be if he was in shape!