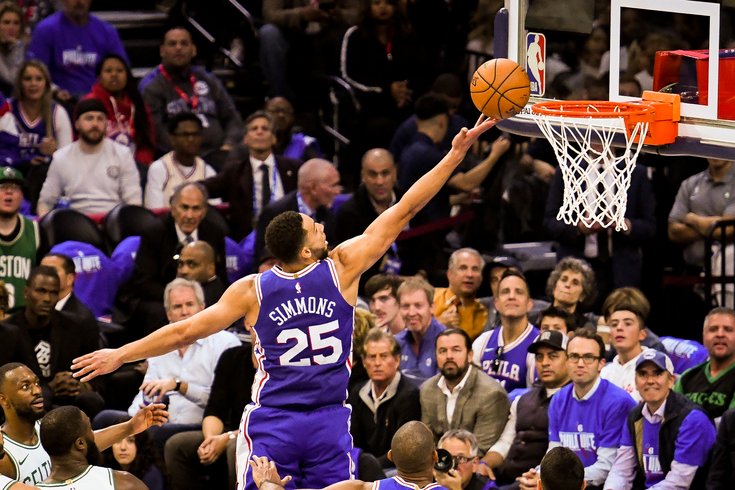 Philadelphia 76ers guard Ben Simmons takes a layup during a game against the Boston Celtics.

Former NBA player Kendrick Perkins has fully transitioned from "he's still in the league?" to basketball pundit in the last 18 months, and on Friday he offered a scalding hot take that would hold its ground against Stephen A. Smith and Skip Bayless.

Perkins said that, were he in charge of the Philadelphia 76ers, he would try to trade Ben Simmons.

Appearing on a podcast called Scal & Pals, which includes former "NBA player" Brian Scalabrine, Perkins was unabashed in his assessment of Simmons' abilities.

You can find the un-embeddable video at this link. Here's a transcript of what the pod had to say, featuring Perkins and an unidentified Podcast Guy:

PG: "Would you think about moving him?"

That sure is a take!

And, look, I know what Perkins is saying. Simmons and Embiid aren't a natural offensive fit. Simmons clogs the floor when he's not running point from the top of the arc, and his inability — and unwillingness — to shoot jump shots makes adequate floor spacing nearly impossible. Plus, Embiid's love for Jimmy Butler is well-documented.

But trading Simmons doesn't feel, at this point, like the right call. This is largely an overreaction to Simmons' first seven games of the season.

The Sixers' championship window isn't limitless, and it sure feels like this season presents a prime chance at a title, but trading one of your two franchise cornerstones would be a wild, organization-shifting move. Simmons is an elite playmaker, one of the fastest players in the league, and an underrated defender.

We absolutely need to see Simmons shake his jump shot yips and at least attempt some dang threes. Maybe the coaches should give him a hard-set command to shoot threes if he's open, rather than just nudging him in that direction. But you'd be hard pressed to find any team with the correct assets-and-players combination to give you anything close to fair value for what Simmons brings to the table.