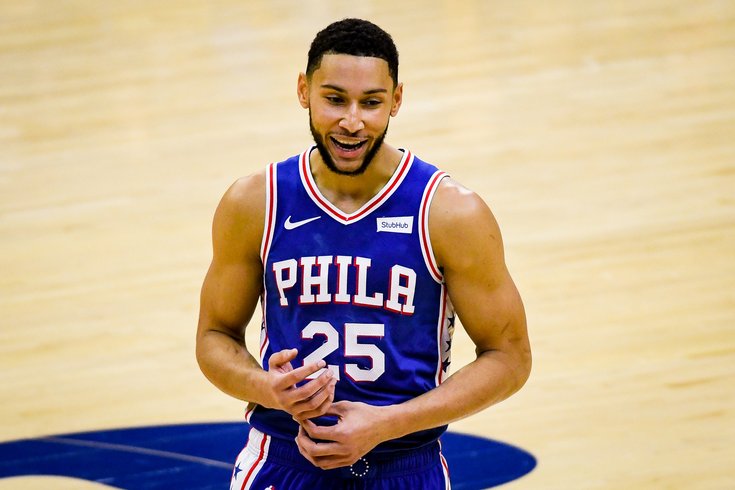 Everybody likes awards. Five Star Review is our way of catering to that urge, spotlighting key sequences and performances, in-game oddities, puzzling quotes, and everything in between from each Sixers game. This space offers a chance to reflect further on observations from the night before using video, quotes, and good old-fashioned logic.

Today's game: the Sixers' first loss of the season, a 114-109 defeat at the hands of the Phoenix Suns.

There has been no change in Ben Simmons' offensive habits

2019 is both the best and worst time in human history to try to take a strong stance on anything. Throw out a sports opinion with enough teeth and you are guaranteed to get a reaction and find an audience. The cost is slaloming through an avalanche of "SimmonsMVP2020" Twitter accounts waiting to pull the chopper on anyone willing to criticize the athletic man they watch on TV every night.

Here's the thing — all the summer mixtapes on Instagram, all the preseason claims about dedication to your craft, all the stories about grinding in the gym, none of it means absolutely anything if it doesn't amount to changes to your in-game habits. Six games in, Ben Simmons would have you believe he spent the better part of four months working on his game and came away without a material change in his approach.

No one asked Simmons to head to Los Angeles for the summer and return as Ray Allen. Not fans, not media members, not coaches, not his family and friends. The expectations were simple: work on your game and show us you've been putting the time in when the lights come on.

So let's take stock of where he's at. His interest in the three-point line is still zero, his attempts at jumpers are almost exclusively of the ugly, fading away from 12 feet variety, and through six games he is getting to the free-throw line less than last season. The Sixers used him early and often as a screener for Tobias Harris against Phoenix, and not once did Simmons consider popping out to the three-point line as a response to Aron Baynes playing 10 feet off of him.

If you were looking at it solely through the lens of how it impacts Ben Simmons as a scorer, it would be a problem. Baynes' job is easy here, and he is strong enough to stand Simmons up and force him into a tough hook shot.

But basketball is a team sport, and so Simmons' instincts impact far more than just his own wild bricks from six feet out.

Consider the night Tobias Harris had against the Phoenix Suns. In many ways, it was confirmation of why the Sixers decided to bring him back on a huge contract in the first place. He was adaptable on offense and carried them until Al Horford got going, scoring on possessions where he would start on or off of the ball.

But look again at possessions with Simmons as the screener in pick-and-rolls, this time on shots Harris was taking. A lot of Harris' damage was done in the long-two area of the floor teams want opposing players to shoot from.

Yes, Phoenix probably did a lot of wincing during Harris' early onslaught, and he's more than capable of punishing drop coverage. But when his shots stopped falling as the game wore on, Phoenix had achieved the goal of every modern NBA defense without having to put in much hard work to get there. Simmons, in a sense, was just gifting them easy defensive possessions.

And that's true even when his teammates try to do something other than settle for a long two. Late in the second half, Harris would try to take the ball inside to score at the rim, and Kelly Oubre was free to ignore Simmons to block the would-be scorer in the paint.

A lot of people believe this is on the coaching staff, a claim strengthened by Brett Brown asserting in September that he would remove Simmons from the dunker's spot. To the extent that the Sixers haven't developed any reasonable counter to this sort of defense, yes, it reflects poorly on the coaching staff that we're still here.

But suggesting it should take coaches to get Simmons to play as if he understands the importance of the three-point line in the year 2019 is beyond parody. Aron Baynes, a center who took seven total threes during his first five years in the league, has opened the season averaging over four attempts per game from deep. You cannot believe basketball intelligence and awareness are strengths of Simmons' only to suggest ignoring the three-point line falls under "Just Coach Things."

Reading and reacting is built into the Sixers' offense, but the man who is supposed to helm it needs to be told, "Hey, maybe you should do something other than drift into the guy giving you 12 feet of space as the screener in a pick-and-roll?" Please.

His jumper is no less important this season than it was in the past two years of postseason play when he was schemed out of two different series, and in fact, is arguably more important given that they no longer have JJ Redick and figure to have a crunch-time lineup built around two would-be centers. To come back to start the year and not even make an attempt to do anything different is absolutely absurd. It must change.

The rookie is off to a great start on the defensive end, but I'm not sure if people realize how much work there is to be done on offense. There are very basic plays on the table for him to make that he just can't make happen, and not for lack of trying.

This is not a misprint — Thybulle is shooting just over 24 percent from the field. Most of his attempts have been from three, so that number may be a little misleading, but self-creation seems like a far-away goal for him at this point. Even when he has a path to the rim, he can get the ball stuck under himself at times, leading to offensive resets. The plays where he's careening into bodies and coughing it up are more noticeable, but these matter a lot too:

On second thought, maybe we should put this on Simmons too, since Thybulle is only barreling into a triple-team in the paint because no one cares to guard Simmons.

(I'm kidding, not everything is completely Ben's fault.)

Don't look now, but Korkmaz is up over 40 percent from three for the season so far, and he is tied for the third-most attempts on the team to this point. His defense is what it is, but if he proves to be a real outside shooting threat that sticks in the rotation, it's a huge win for the bench.

(Sidebar: If Korkmaz fulfills the prophecy of Brown trying to "grow a bomber," I vote we call him Bomberman.)

The Sixers might have been buried by the middle of the fourth quarter if not for some excellent play at the ends of quarters on Monday night. Their close to the first period was especially brilliant, with Raul Neto rushing the team up the floor to create a two-for-one scenario before finding Al Horford for a quarter-closing triple.

In years past, the Sixers mastered running what Bill Simmons once coined the "clogged toilet offense" in these scenarios, ugly isolation sets that lead to nowhere. While I'm sure there are plenty of those plays coming in the future, finishing strong in the first, second, and third quarters is just as critical to victories as crunch time.

It is a shame the Sixers wasted an A+ Horford game on Monday night, because he was spectacular in Phoenix. The work he put in as a shooter this past summer finally shone through, and Horford supplemented his big night from deep with a lot of tough shotmaking to keep them in the game down the stretch, torturing his old pal Baynes with hook shots, jumpers from the free-throw line, and some good, old-fashioned hard screens.

The Sixers shouldn't and probably won't lose many games where Horford is in that much of a shooting zone, and if he's anywhere close to that good with Embiid on the floor, look out.