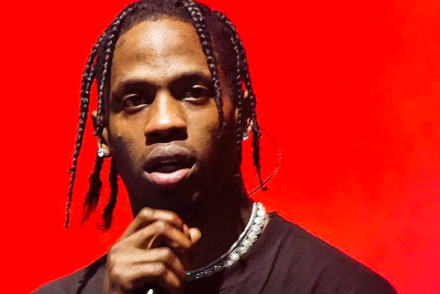 The Come Up Show/Creative Commons

Philadelphia 76ers legend Allen Iverson said it was 'dope' to see rapper Travis Scott dress up as him for Halloween. Iverson also talked about the Sixers' hot start to the NBA season and Joel Embiid's aggressive style on the court.

Halloween is already behind us, but in the parade of great dog costumes that appeared last week, an impressive tribute to Philadelphia 76ers legend Allen Iverson got overlooked.

Hip-hop star Travis Scott shared a photo of himself in costume as Iverson, including a re-creation of the "SLAM" magazine cover that became synonymous with Iverson's image.

The cornrows are a bit of a different style than Iverson's, but the costume as a whole was well-executed.

Iverson has been celebrating Reebok's reissuing of the Question Mid Double Cross sneakers that he wore throughout his rookie year. During an interview with Complex about the Reebok promotion, which features current Sixers Josh Richardson and Trey Burke, Iverson also was asked about Scott's costume.

"It was dope," Iverson said. "You know, I love him as an artist. I don't know if I've met Travis. I don't think I've met him. But then to see that, my kids were calling me and talking about it. They really thought it was cool because they're big fans, too."

Iverson also was asked about the Sixers' hot start this season and his impressions on Joel Embiid's fight with Karl-Anthony Towns.

"It's easy and cliche to just say I think they're going to win it and we're a great team, but it's a beautiful feeling when you believe it," Iverson said. "You believe in the organization, you believe in the players, and understand that you can brag the way you want to brag, and not be just bragging because of the logo. I just think we've got a chance to come out of the East, and we're going to run into a juggernaut from the West."

As for the Embiid fight, Iverson said he approached the game differently, but wouldn't fault Embiid for his style.

"I was never a trash talker," Iverson said. "That's his lane. As long as he's having fun and it gets him up and helps him play better, then to each his own.