The funniest reactions to the Joel Embiid-KAT fight: a pinky, angry mom and Jimmy Butler 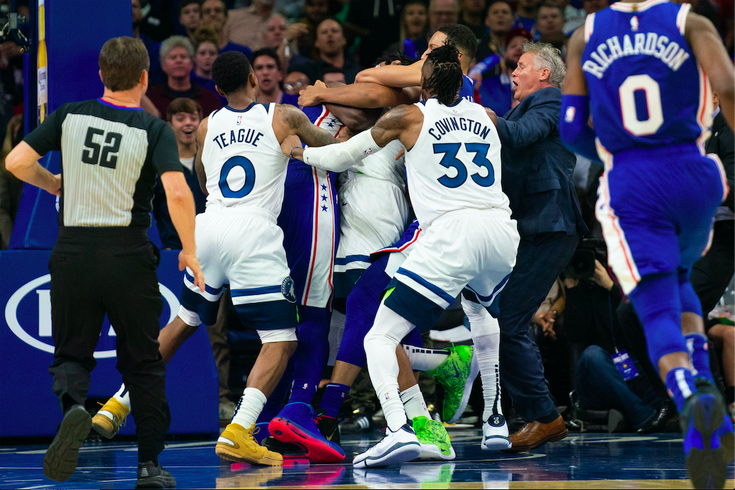 The NBA world is awaiting a verdict from commissioner Adam Silver on suspensions for the fight between Sixers big man Joel Embiid and Timberwolves center Karl-Anthony Towns, not to mention possible punishment for Ben Simmons' role in Wednesday night's scrap. (Update: 2 game suspensions for Embiid and Towns, none for Simmons).

And yet, Philadelphia saw a bonding moment in all of this.

Ben Simmons just put KAT in a chokehold for going at Embiid. Don’t ever talk to me about bad chemistry between those to ever again. That’s the city of brotherly love right there.

After the fight escalated into a much more personal beef on social media last night, basketball became something of an afterthought. The Sixers trounced Minnesota 117-95 to remain undefeated, but the story of the day has been the dust-up between Embiid and Towns.

Just in case you somehow haven't seen the fight, here's a good look at what transpired in the third quarter following a Towns turnover.

Reactions on Twitter have been all over the place, but what we care about here are the funny ones. Pretty soon, when Embiid is likely missing games, this will be awful. We might as well laugh while we can.

The vicious moment that began the Embiid and KAT fight.... Shoul be banned by the league. @SONTHoops pic.twitter.com/1VpdZZcdUv

Towns was born in Edison, New Jersey and grew up in Piscataway (and he's a massive Eagles fan). Naturally, his mother made the trip to attend her son's game in Philadelphia. She had words and a gesture for Embiid as he exited the court to roaring chants of "MVP."

Check KATs mom at the top flipping Embiid off 😂 she was about to fight for her son https://t.co/HVpmtwVKLj

KAT’s mom was not a fan of Embiid after that fight 😂😂😂 @JoelEmbiid @sixers #SixersTalk pic.twitter.com/JGJBJmLyE5

Based on last night, it's hard to believe Embiid and Towns were ever friends, going back to the Nike Hoops Summit in 2013.

Their relationship may have soured as a result of Embiid's close friendship with Jimmy Butler, whose rocky departure from Minnesota last season was closely linked to differences with younger teammates, including Towns. Butler probably brought some stories to Philadelphia that have fueled Embiid's dominant performances and psychological warfare against Towns.

Embiid even hinted at Butler's dirt on Towns in his Instagram attacks after the game, and Butler acknowledged the Instagram posts.

Speaking of Embiid's harsh words, this has devolved into accusations that he deleted his own comment on Towns' post and then accused Towns of deleting it to make him look soft. Not everyone is buying that.

Or maybe Embiid knows that there are probably a ton of kids who follow KAT, has too much respect to leave a comment with "you've been a pussy your whole life" under the post, so did the admirable thing and just took a screenshot of the comment to post on his own story https://t.co/eNN2j1fBwQ

Apart from all that, here are some good laughs to take away from the whole fracas.

KAT in the locker room after being bullied by Embiid tonight pic.twitter.com/cHhfT1wwBJ

Al Horford has no time for this. pic.twitter.com/vgRIQ4on7m

All of #NBATwitter is so gassed on this KAT v Embiid war.

But it doesn’t even come CLOSE to the time Wayne Rooney challenged himself to a fight pic.twitter.com/pEOozyXP8e

This Embiid vs KAT beef warms my heart pic.twitter.com/UhFvurUrCx

Jimmy Butler watching KAT and Embiid go at it pic.twitter.com/scIxEvj6cS

How Embiid and KAT tryna one-up each other on IG pic.twitter.com/WbGESFFV1W

me, watching my sixers pic.twitter.com/Mwut3ZM4gT

It's doubtful we've seen or heard the last of this battle, and the Sixers may pay the price for it on the court in the short-run. In the long-run, as entertaining as it is to see Embiid embrace his place in Philadelphia, he's going to have to reign it in as other players around the league try to bait him into ejections. We've seen Embiid resist it with Marcus Smart. He'll have to restore that level of composure, because this won't be funny in May.