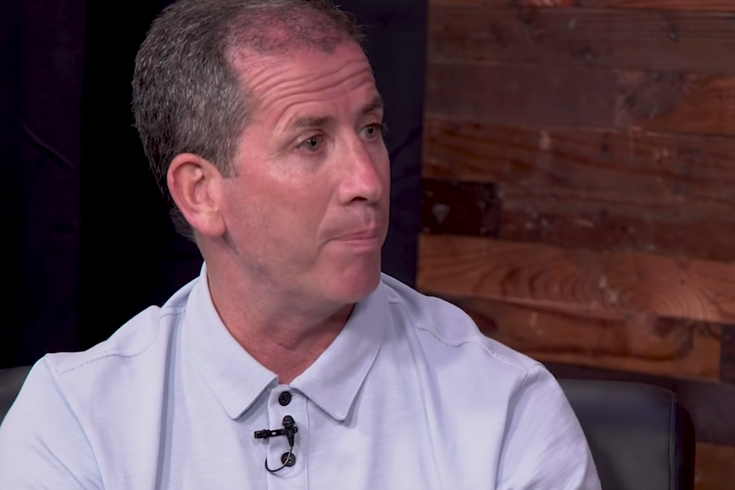 Former NBA referee and Delaware County native Tim Donaghy was at the center of the NBA's biggest-ever betting scandal in 2007. Now his story is a feature-length film.

If you know the name Tim Donaghy, you likely know about his past: A former NBA referee and a Delaware County native, Donaghy was at the center of the NBA's biggest-ever betting scandal in 2007. One of the more established refs in the league at the time, Donaghy got involved with longtime friends from the area and started gambling on the very games he was refereeing.

Donaghy was sentenced in 2008 to 15 months in prison for his role in the scandal, and released a memoir in 2009. Now, his story is back in the spotlight with the dramatic feature-length film "Inside Game", out Friday. Here's the trailer:

Big drama in the Philly area! It looks like a movie I will watch online at some point.

Anyway, Donaghy joined Angelo Cataldi on the 94WIP morning show Friday to discuss the movie, his journey, and his Philly ties.

The two began their chat by discussing — what else? — Delaware County's penchant for gambling, and how Donaghy was basically born into the perfect situation for what would happen later in his life:

"AC: I've been told Delaware County is a breeding ground for gambling. That little kids have parlay cards. Is that true?

TD: I remember being in high school, and the guys would come in with the little white cards to pick four NFL games, so it was something that was prevalent in the area.

AC: Alright, and another amazing thing was that Cardinal O'Hara, where you went, was a breeding ground for referees. NBA referees, right?

TD: Our whole immediate area was a breeding ground for referees. You talk about guys like Earl Strom, Joe Crawford, Billy Oaks, Steve Javie. Those guys were the lead guys, and they passed the craft on to the younger guys like myself who wanted to become referees.

AC: Is there an explanation for why that one area developed so many big talents that went to the big leagues?

TD: I think it's because the basketball in Philadelphia's so good, so you can learn refereeing some bigger guys, and those guys were adamant in helping other people. They helped the younger guys learn the game."

You can listen to the full interview here.

Donaghy has largely taken ownership of his personal failures in a press tour preceding the movie, and he said during the interview with Cataldi that he "made some poor choices, and crossed some lines that I shouldn't have been near."

And if it feels a little off that Donaghy's story will be generating big box office money, here's some good-ish news: a portion of the film's proceeds will go towards the Elwyn School in Media, which serves people with intellectual and development disabilities.