Sixers' Ben Simmons ruled out for game vs. Denver Nuggets with shoulder injury 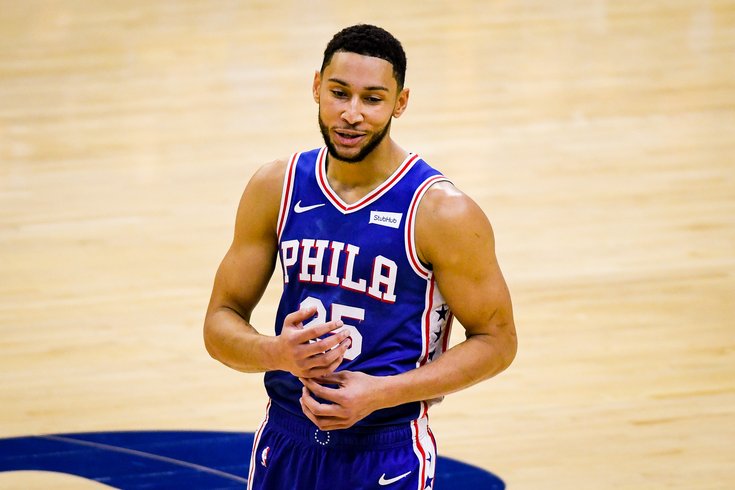 Ben Simmons has been ruled out for Friday's Sixers game against the Nuggets, according to the NBA's official injury report released on Thursday evening.

A Sixers spokesman told PhillyVoice that after further examination of his shoulder on Thursday, tests revealed a Grade 1 AC joint sprain, which Simmons suffered early in the first half of Wednesday night's game against the Utah Jazz. He would be removed from the game midway through the second quarter, and eventually ruled out after playing just 10 minutes.

Though Simmons has come under fire for his offensive development (or lack thereof) over the offseason, he is an absolutely indispensable piece of the Sixers on both sides of the floor. Defensively, he has been one of their most consistent performers night in and night out this year, and on a team with a severe lack of ballhandling, Simmons' absence will make life harder for just about everyone.

Where does Brett Brown go from here? That's hard to say. Raul Neto has emerged as a legitimate rotation option over the last few games, though the head coach tends to try to keep his bench unit as intact as possible when he can. With Simmons missing the second half against Utah, Brown turned to Josh Richardson to playing starting "point guard" in the second half, putting more shooting on the floor in the form of Furkan Korkmaz.

Any decision Brown makes, of course, will come with repercussions for the second unit. Should Neto get a chance to start to keep the rest of the starting lineup in place, Brown will have to decide if he is still up for letting Richardson run backup point or whether this is a good time to dust off Trey Burke and see what the veteran guard can do with some minutes in the rotation. Given the lack of creativity on the perimeter, it would not be a bad idea to experiment with the second unit.

(One silver lining here — the Sixers will be able to pair their big men with guards who are credible pick-and-roll options, and Philadelphia can play a lot more one in, four out offense with Joel Embiid or Al Horford in the middle. Getting a look at a different environment on offense will be useful in assessing what they might need behind the starters down the road, if nothing else.)

A small dose of relief could be coming in the form of Shake Milton, who returned to participation at shootaround on the team's road trip and is set to be reevaluated following Friday's game in Denver. That won't help them against the Nuggets, but should Simmons miss more games, Milton returning would at least give them another player who can dribble and shoot, which they desperately need.

As for the timetable, the Sixers have yet to commit to any sort of timeframe regarding Simmons' health, but Yahoo's Chris Haynes is reporting Simmons is expected to miss the next three games with the injury.

Thankfully for Philadelphia, the schedule lightens up after the date with Denver, with home games against Charlotte and Cleveland coming up on Sunday and Tuesday respectively. The Sixers should have enough firepower to beat both those teams with or without Simmons, though ultimately that will be put to the test when they actually hit the floor.