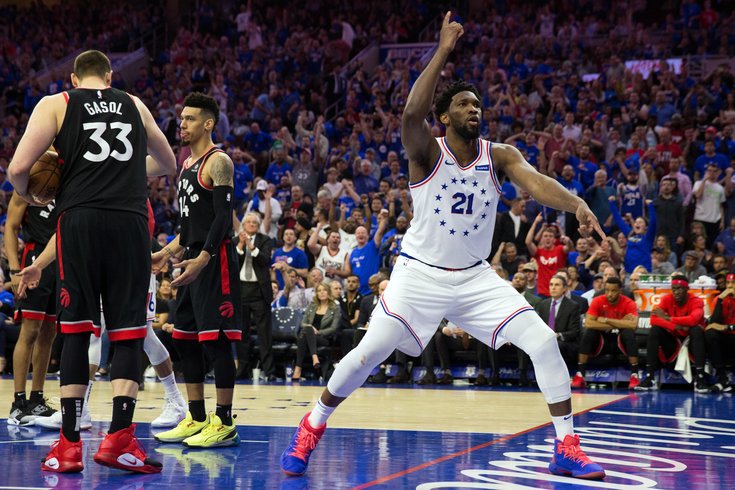 The Sixers had a chance to show the Toronto Raptors what a real homecourt advantage looked like on Thursday night. They rode the Philadelphia crowd and a dominant Joel Embiid for 48 minutes, handing the Raptors a massive 116-95 defeat to take a 2-1 lead over Toronto.

You are not going to see many playoff performances like that from the Sixers in your lifetime, and you are not going to see many players as good as Joel Embiid suit up for the hometown team. Even with Kawhi Leonard shooting fireballs out of his eyes through three quarters, it was Embiid who got the last laugh, putting up 33 points, 10 rebounds, three assists, five blocks, and a collection of spectacular highlights in 28 minutes.

Here's what I saw in Game 3, with more to come.

• There was a lot of talk over the last two days about this being the biggest home game for the Sixers since they made a Finals run in 2001. I think that's a little dismissive of the chance they had to make a run last year, struggles against Boston notwithstanding, but I can tell you this — the Philly crowd absolutely came ready for the occasion on Thursday night.

It was an odd scene before the game started, with a smoke machine dumping a haze over the floor that didn't disappear until after the first quarter had already started. But the locals were not even a little bit disturbed, and they made you feel their presence before the game even started, with some loud "Let's Go Sixers!" chants raining down from the rafters.

These moments have been few and far between for the Sixers and their fans, so good on the home crowd for taking advantage of this one.

• If there was one thing the Sixers needed to do upon returning home, it was getting Joel Embiid rolling. They may have stolen a game in Toronto, but the odds are that you're going to need your best player to play like your best player to beat a 58-win team in a playoff series.

The Sixers played through Embiid almost exclusively early on, and they allowed him to attack out of a variety of different looks. They posted him up, they used him as a roll man in pick-and-roll sets, and yes, they gave him the opportunity to shoot from the perimeter. Asking Embiid to be more of a roll man is absolutely the right call against Gasol, who struggles to move laterally/defending in space at this point in his career, even if it's not Embiid's preferred style of offense.

Gasol struggled to defend Embiid period, for what it's worth. The man was out here clowning on all comers:

I also thought we saw some flashes of maturity from Embiid, who has never been shy about getting his shots up. He had a wide-open three tipped out to him on an offensive rebound in the second quarter, and instead of pulling immediately as we've seen him do in the past, he stepped in, drew attention, and then fired a pass to Jimmy Butler beyond the arc, and Butler nailed a huge three.

Embiid said he was going to do whatever it took to get his team wins in this series, and sometimes that means altering the offensive routine. Whether that was a product of the scheme or one of the world's best players just busting out of a slump naturally is hard to say. Whatever the case is, he looked fantastic on Thursday, and that bodes well for the Sixers in this series.

And oh, by the way, that guy is one of the best defensive players in the league, as he reminded you once again in Game 3. It is scary to watch Embiid fly through the air for a chasedown block with no regard for the consequences of the landing, but if you don't think that inspires the crowd and his teammates, you're crazy.

Embiid had five blocks against the Raptors, and it honestly felt like 15. He is a menace who fights for every last inch, and the Raptors are finding that out the hard way.

• I'm not sure how this is happening, but not only is the Sixers bench hanging with Toronto's bench, they are straight up outplaying them. A unit that has been Philadelphia's Achilles heel all year has suddenly given them a real lift against a team that, in theory, features some legit impact players off the bench.

Maybe this says more about how awful Toronto's bench players have been than anything else, because Fred Van Vleet has morphed from a legitimately useful bench guard into a walking garbage can through the first three games. But give credit where it is due because the Sixers are getting a little bit of everything from their second unit.

A Mike Scott three in his first game back following an injury? Check. James Ennis hitting the offensive glass hard and creating second chances for the Sixers? You bet. Greg Monroe ripping the ball from Kawhi Leonard's hands on a drive? I can't believe that's a real thing that happened, but absolutely. Ennis has been the team's best bench piece by far, partially because he can fit into any lineup, but the group has acquitted themselves well.

The playoffs are a time where you can throw out scouting reports and preconceived notions of what a player can bring to the table. There's a reason legacies are built in the playoffs — not every guy is built for this spotlight. So far, the Sixers' bench players have proven they are ready for this moment, regardless of whatever they showed in the regular season.

• Let me be the first to welcome Tobias Harris to this wonderful series we've been watching unfold over the last week. Harris had a tough go of it on the road in Toronto, but he was locked in from the start in Game 3.

It all started with a little bit of defense. Kawhi Leonard continued to torture the Sixers on Thursday, but his first attempt of the game was swatted away by Harris at the rim, and that helped to give the crowd an early lift and put a spring in the step of Philadelphia's power forward. You never know what play is going to be the one that gets somebody going, and the best thing you can say about Harris in this series is that he hasn't allowed shooting slumps to impact his approach elsewhere.

We finally got to see him get back to his old tricks on offense, knocking down threes, shooting over smaller players (mostly Kyle Lowry) in the mid-post, and finding his teammates for open looks out of the pick-and-roll. They are hard to beat when Harris plays and shoots well.

• We've seen every version of Jimmy Butler there is to see so far in these playoffs, and the Sixers have only played eight games so far. After alpha dog Butler led them to victory as a scorer on Monday night, it was time for the glue guy to reemerge from the locker room in Game 3, and Butler played his role to perfection.

Butler has not been a huge part of the offensive rebounding assault the Sixers have been on in this series since he has a responsibility to get back in transition, but he has refused to get beat on the other end, flying into traffic with both arms up ready to end possessions.

And if anyone deserves credit for the Sixers taking it up a level on the defensive end in the postseason, it's probably Butler, whose effort and reads have just been on a completely different planet from what we saw down the stretch of the regular season. The Sixers had a couple of defensive possessions on Thursday where their rotations were the best we have seen them maybe in my entire lifetime of watching Sixers games. Butler's effort, athleticism, and communication were at the heart of that.

Outside of a clunker in Game 1 in Toronto, Butler has done an excellent job responding to the challenge of each individual game in this series, whether he's dominating the ball or filling in gaps. He still took it right at slower or smaller players in Game 3 when the matchup made sense. If Butler's free agency wishes are going to be impacted by these playoffs, he's making a damn good sales pitch.

• I honestly don't know what you're supposed to do to stop Kawhi Leonard. I'm not sure if this is a controversial opinion with Kevin Durant absolutely dominating the Western Conference playoffs, but I think Leonard might just be the best player in the league now, full stop.

It's hard to really fault anyone for what transpired in the third quarter, when Leonard took over the game by himself. The Sixers threw all kinds of looks at him — blitzes, hedges, drop coverage, you name it — and he didn't even pretend to care about any of it. The only time Leonard looked flustered is when the Sixers got him stuck in between decisions as a passer, producing a couple of turnovers during an otherwise blistering stretch.

The Sixers asked Ben Simmons to handle the assignment for a lot of Game 3, and frankly, he did a pretty good job of staying with him and forcing Leonard to go through multiple moves to create separation. If a guy is going to hit contested shot after contested shot, there's not a lot you can do.

When you deliver as complete of a performance as the Sixers did on Thursday, that's about all you can come up with in the bad. And even that's a stretch — tip your cap to that man in the opposing team's jersey.

• Man did that game feature a lot of flopping. And the worst part is the officials catered to it, which is only going to prompt the players to flop even more. This was not a Toronto-only issue, though it felt like one with the home crowd reacting to every perceived flop from Kyle Lowry and Kawhi Leonard as if they'd personally insulted every paying member of the crowd.

• Pascal Siakam's trip of Joel Embiid was not even an attempt at a basketball play, and I was stunned that the officials decided that was only a flagrant one foul. To me, that's the exact sort of play the flagrant two exists for. Siakam was on the ground with no play on the ball, so he stuck a leg out and tripped somebody. There's no place for that in the game, period.

The refs didn't see it that way, but it made for a great setup of Embiid blocking Siakam back to Canada about :20 of game action later, which sent the south Philly crowd into hysterics.

The good guy won in the end.