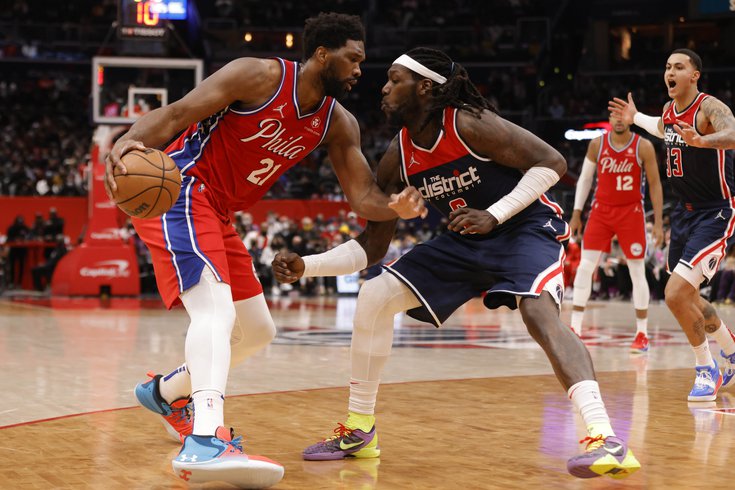 Joel Embiid had another good night as the Sixers breezed past the Wizards.

The Sixers got a much-needed win over the Wizards on Sunday night, with Philadelphia rolling to a 117-96 victory to put some recent tough losses in the rearview.

• Joel Embiid's approach has been all over the place lately, with his focus coming and going during a stretch of games where their opponents have been banged up. He set a serious tone in this one, seizing a favorable matchup in the frontcourt and getting work on the block early.

Though it certainly helped that his jumper was working — Embiid hit a wing three and a beautiful free-throw line jumper in the first, the latter complete with a dead-stop move that sent Deni Avdija right past him — it was early physicality that ruled the day for Embiid. Aside from an early turnover he'd like to have back, Embiid did an excellent job of either drawing or shedding pressure, using Washington's focus on him against their opponent.

These Wizards have very little resistance to throw in front of Embiid, and that was most clear when he got Montrezl Harrell thrown out of this game in the third quarter. After knocking Harrell over not once, but twice on the same possession, the two centers got into a tussle and picked up matching technical fouls afterward.

When Harrell dunked the ball and hung on the rim a little bit the next possession, Embiid got his revenge by scoring through a Harrell foul on the other end, chirping near his counterpart after finishing off the play. And when Harrell took the bait and shoved him just enough for the officials to notice, Embiid simply pointed out the infraction and prepared to shoot his free throws, remaining on the floor to help his team put the game away.

As a long-running member of the "Let Embiid shoot jumpers" club, this is a game that feels like a good compromise between the two worlds he operates in. There was a hilarious heat check he probably should have tucked in the third quarter, but most of his shots were either clean looks from three, power moves around the basket, or face-up jumpers around the free-throw line that he has made hundreds and hundreds of times. When single coverage opportunities were there, he struck. When doubles crowded him, he either made a quick scoring move or tried to get the ball out of there. There is room for Embiid to make use of all his tools on offense, so long as he can find the right balance and avoid the overdribbling that plagues him during bad games.

Embiid knows that the other guys on this team follow his example, and too often lately, he has taken a lackadaisical approach to the start of games, the rest of the group following suit until he decides it's time to try to bail them out of the brutal first quarters they've been playing. He is not always going to get matchups that allow him to dominate as a scorer like this one did/does, but he showed last season his approach to the game can be at a high level each and every game.

It's time for him to string these games together every night again. Give me "blood in the water" Embiid every night and I'll take my chances.

• It's not often I've been able to say, "I like that offensive wrinkle" during the last two months of Sixers basketball, but there was a worthy sequence early in Sunday night's win. With Seth Curry handling the basketball, the Sixers used Tobias Harris as the screener and got him the ball while rolling toward the basket, setting him up for an easy look at the rim with minimal effort needed to create a good look.

Given the problems Harris has had trying to create separation this season, any effort to make his life easier is going to get a green checkmark from this writer. Even if they only do this a few times per game, it would be a welcome addition to the call sheet.

It's the same principle as they should follow for Embiid — just because he can create his own offense doesn't mean you should force him to live on an island all game. Help your best players, and they'll help you. By manufacturing some easy looks for Harris early, the Sixers were able to find the best version of Harris in D.C. on Sunday, with Harris building off of the early makes to take over portions of this game as a scorer.

The most encouraging thing about his night is that he was able to score on several occasions by bullying Wizards players, primarily Deni Avdija, who he relished attacking on the o-glass and from the mid-post. Harris' physicality has been non-existent for a lot of this year, and whether that's because of his bout with COVID or one of the bumps and bruises that have impacted him since training camp, it's nice to see him find some of his old form again.

• Furkan Korkmaz feels like he hasn't made a shot in two months, so he was long overdue to make a positive contribution off of the bench. After the first three went down for Korkmaz, the lid appeared to come off of the basket, so much so that Korkmaz even threw in a pretty absurd layup through contact in the second quarter, to the absolute delight of teammate Georges Niang:

The best part of Furk's bucket is Georges' reaction

The composition of that second unit might have had something to do with Korkmaz (and Niang's) success. Despite the fact that they played without a lead ballhandler with the second unit, the Sixers were able to create open threes for their backup shooters in the first half thanks in part to the rim gravity of Charles Bassey, who if nothing else always rolls hard to the rim after he sets screens. With the Wizards needing to tag Bassey to prevent open layups and/or dunks, the wing shooters got a lot of clean looks at the hoop.

Getting anything out of this second unit is a major bonus right now, so I can even excuse some dumb fouls and defensive miscues from the backups.

• This game is not going to go in the highlights of Tyrese Maxey's second-year breakout, but this felt like a good example of how he can be an impactful piece of the starting lineup in an Embiid-centric world. The offense was out of his hands for long stretches of the game, but he knew exactly what he wanted to do whenever the ball came his way, and the lack of hesitation from Maxey opened things up for everyone, including Maxey himself.

One of my favorite plays of the game was a nondescript possession in the third quarter where Maxey got to the paint with the intent to "Nash" under the basket, keeping his dribble alive long enough to spot Embiid in the lane for a comically short jumper and an easy two points. Finding ways for those to combine is more than just sticking them in pick-and-rolls and handoffs together, it's about both guys understanding that their scoring chops can lead to easier looks for the other guy, if they care to look for them.

And frankly, Maxey playing at all after dealing with a housefire over the Christmas weekend deserves its own set of kudos. Sending good vibes to Maxey and his family as he tries to get his off-court life in order in the coming days.

• Matisse Thybulle offered almost nothing on offense for the entirety of Sunday's game, but he was disruptive enough on defense that it didn't matter. Spencer Dinwiddie had trouble holding onto the ball when Thybulle was guarding him as the initiator, and when the Washington product had chances to play more of a roamer role on defense, you saw flashes of the guy who was an absolute terror next to Ben Simmons the last two years.

• Transition defense was one of Philadelphia's biggest weaknesses last season, and they've actually given up more points on the break this year than last despite moving up a spot in the leaguewide rankings. They are susceptible to getting punished on the break, and there are certain possessions that have to drive Doc Rivers and the coaching staff absolutely nuts.

The worst ones are the opponent scores that come immediately after made Sixers baskets, and there were far too many of these on Sunday evening. Rookie Corey Kispert made it a habit to leak out and run the floor immediately after Philly scored, and he was able to get some cheapies before the Sixers could get back. Given what the Sixers have said recently about their offense feeding into their defense and vice versa, it was disheartening to see them waste chances to get back and set their defense, chances that in theory should allow them to string together stops and go on runs.

This is a team responsibility, so every guy on the roster owns part of this problem.

• Passing up open shots and settling for dubious looks remains one of the biggest problems the Sixers have, and at a certain point you probably have to point the finger at Rivers for not putting a stop to this practice. When you remember that Mr. Threes and Layups himself is running Philadelphia's front office, it's hard to believe the mandate coming down from the top is for the offense to center around a lot of long twos.

When a mid-range jumper is used to bail out the offense late in the clock with pressure coming down on Seth Curry, that's an acceptable enough outcome even if it's not ideal. The problem is that the Sixers are relying on shooting success on long twos to carry the offense, which is not a sustainable way to play basketball unless you have enough good shooters from that area to overcome the math.

Not even Curry can do that on a consistent basis, and he had a pretty rancid game against Washington on Sunday, driving the point home about shot selection. As my good friend Rich Hofmann was kind enough put into a clip, these simply have to be threes for Curry, who has absolutely no excuse to step in when a look like this presents itself:

One nitpick is Seth's shot selection, which becomes more of an issue when he's not shooting 61 percent from mid-range.

Harris did a nice job attacking a hard closeout here and playing drive and kick. You're a Curry, take the 3! pic.twitter.com/nZu4QJuyaN

This offense probably still wouldn't be that good even if they took all the right shots and played more carefree when decent shot opportunities were there. That said, they play like a team that has a lot more firepower than they actually have on hand, recycling possessions as if they believe they have an elite perimeter shot creator who will bail them out late in the shot clock. You'd rather live with, say, Curry or Harris taking an open catch-and-shoot three than watch them swing the ball, step in for a long two, or hesitate long enough to bring the possession to a screeching halt.

• I'm glad the Embiid/Harrell scuffle late in the third quarter didn't turn into anything bigger, because that means we can laugh about it now. Kudos to Embiid for (mostly) keeping his cool and allowing Harrell to dig his own grave, because a younger Embiid might have been suckered into getting ejected from this one.