The Sixers need better answers for their recent crimes against basketball 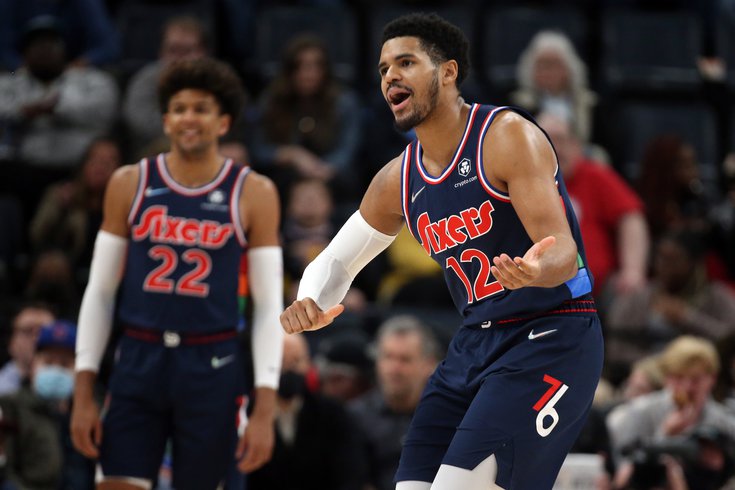 The Sixers were short-handed again Monday and fell in Memphis.

The Sixers have lost four of their last five games, each loss coming against a team impacted by COVID or waves of injuries. Each time out, there have been explanations for their issues — they had late scratches vs. Memphis, struggled with zone against Miami, got beat by Kevin Durant in Brooklyn, and well, I suppose the explanations ran out against Atlanta. Or at least, you would have thought they ran out until Doc Rivers stepped up to the podium and addressed the loss on Thursday night.

"I didn't think we played with great, by the way we have guys out too, by the way. Tonight was our best advantage as far as guys being out," Rivers said. "And you got to win tonight, honestly, but we didn't because I thought we approached the game very casual, and we played that way. I thought they did whatever they wanted offensively, I thought they were the aggressor defensively."

To put it lightly, no one around here (this writer included) wants to hear that nonsense, save for the bit about them needing to win the game. Comparing Philadelphia's absences to Atlanta's does not flatter the home team, unless you earnestly believe the absence of Trae Young, Clint Capela, Kevin Huerter, and more is equivalent to Philadelphia going without three backups and the fifth starter who has struggled mightily all season. It's a suggestion that is absurd on its face, and Rivers has to know that even as he says it. Ever the politician, though, Rivers can't help but try to score points when his team proves incapable of doing so.

In fairness to Rivers, the totality of his message was deeper and longer than that. We can all agree it was an unacceptable loss, it's a game they should have won, so on and so forth. The problem is that the Sixers keep running into the same problems with the same players at the same times, only to act as though they're being presented with new information when they lose yet again.

There are times when fans obsess over starting lineups a bit too much, focusing their energy on a momentary grouping that matters less than it seems. But the public rightfully crushed Rivers when he trotted out a Curry-Thybulle-Korkmaz-Harris-Embiid lineup to open the game, sticking Maxey on the bench and bringing Korkmaz into the lineup for reasons he explained after the game.

"Because [Tyrese] just had one day and we couldn't practice yesterday," Rivers said. "Furk's not going to have the ball a lot, I thought we had a rhythm, so we just went that way."

Rivers would go on to say that Maxey was initially expected to play just 15 minutes in his first game back, that number eventually climbing to 33 because Maxey was one of their best players on the floor. And that initial explanation from Rivers might have held some weight, were it not for the fact that Korkmaz had missed the previous three games with the flu, entering the game with the same concerns Maxey had in terms of game readiness. Maxey had actually missed fewer games during his layoff than Korkmaz had.

Focusing on the quotes, though, is sort of missing the point. This was, and it's hard to believe this looking at them now, the No. 1 offense in the NBA to start the season. Their fall from grace (they are 27th since the 8-2 start) has coincided with a rash of injuries and COVID absences, which must be acknowledged, but it has also been tied to an almost fanatical commitment to playing lineups that don't work together.

Try as Rivers might to make it work, Matisse Thybulle's presence absolutely decimates lineups where Embiid is the anchor. The Sixers are over 16 points worse per 100 possessions when Thybulle is on the floor with Embiid compared to Embiid playing with anybody else, and the concerning part is that they are worse on both ends of the floor, not gaining any defensive steel to make up for the offensive tire fire. And with Bogdan Bogdanovic cooking them down the stretch vs. Atlanta, Thybulle and the defense gave up easy switches that allowed the Hawks to get the matchups they wanted without any resistance, making his inclusion in their crunch-time lineups mostly pointless.

On their end, the Sixers have explained their offensive struggles in a variety of ways, but Tobias Harris touched on one Thursday that might explain something like the Thybulle conundrum.

"Overall theme for us through the year is basically, our offensive execution lacks when our defense is not up to par. It stops us from getting out and running and having an open floor. When we have to take the ball out every time, it forces the other team to be set defensively in the half-court and kind of pick how they want to play half-court defense vs. our offense," Harris said. "Our transition offense is a catalyst to us being a better offensive team. If we don't get stops, we're not able to get to that."

The bad news is they don't have the personnel to fix that problem on either end. They are what their numbers say they are, 19th out of 30 in both offensive and defensive efficiency. On defense, they are small in the backcourt and slow just about everywhere. On offense, they have few guys who can dribble and fewer who can and do reliably hit shots, their fate hinging on a center who must do extraordinary things from parts of floor teams have tried to abandon over the last decade. "Defense will fuel our offense" or "Scoring more will help our defense" sounds good until you grapple with the mechanics of actually improving, which would require either a shift in personnel or a schematic overhaul that dramatically shifts their approach on offense in the middle of the season.

Perhaps the shift is not as complicated as that makes it sound. The Sixers might improve by simply taking more shots when they get open looks from high-value areas. They have been shooting poorly since the start of November, 24th in three-point efficiency, and they've compounded that issue by getting even more gunshy from deep, ranking 28th in attempts during that same time period. To put it lightly, they don't have the perimeter scoring talent to live the way some teams near the bottom (a la Chicago and Phoenix) do, and they are letting decent opportunities pass them by, even when they're for guys who are on the roster to shoot.

How many open threes were passed up in this sequence? pic.twitter.com/wmmhq4Zwet

"Everybody wants to shoot a great percentage or shoot the ball to the best of their ability, we've struggled from three as a group, and that hurts us, including myself," Harris said. "You got to figure out ways to get out of it and find a way to balance making those shots and being able to take them...you still have to take those looks and miss them, whatever may be going on in your own head of trying to drive it or whatever, we do need to take those open looks out there."

It is certainly easier for me to say things like "The Sixers need to figure it out" than it is for the team to put a competent lineup on the floor at all times. In Tyler Johnson's first game with the Sixers on Thursday night, he was asked to be one of the five guys on the floor when Philadelphia absolutely needed a stop with less than 30 seconds to play, an absolutely comical scenario to find yourself in. But looking at the available options, who exactly would you rather have on the floor in that spot? Paul Reed? Isaiah Joe? They weren't exactly picking from a murderer's row of switchable defenders. And the Sixers would end up getting a spot in spite of Embiid needing to physically push Johnson in the direction he wanted because the new guy understandably did not know where he needed to be.

While that highlights the health and wellness of this team, it's also a reflection of what the front office has not prioritized yet this season. Daryl Morey and Co. have preached the same message dating back to the offseason, noting that the Sixers have to operate from a long-term perspective, making sure they don't cap the ceiling of the team by trading Ben Simmons for a middling return. It may very well turn out to look smart if they come away with a high-level player in the eventual trade, but it has looked increasingly foolish as the Sixers have collapsed over the last two months.

They lack talent and skill in critical areas, which is the fundamental reason they are what their record says they are, a mediocre, hard-to-watch team. But the Sixers have also looked like a team content to excuse themselves for poor play because they know the other shoe has yet to drop. Powered by spite early in the season, which they slyly acknowledged in the first few weeks of the year, this group has been running on motivational fumes.

Early in the season, it was easy to bill Rivers as a steady hand in the middle of a storm, the Sixers off to a strong start despite missing Simmons. It was easy to give Joel Embiid credit for improved leadership in spite of his poor shooting start, with the people around him raving about how much more seriously he took the role than in years past. But as both men know good and well, leadership tends to matter much less in good times than it does when times are tough.

When you see sequences like this in a one-possession game with less than five minutes left, any claims about the problems being contained to poor starts against lesser competition begin to fall apart.

Harris, faced with the question of whether they are looking past opponents like the beat-up Hawks, refused to concede that notion.

"Not necessarily. They've got guys out, so do we, the whole thing has been kind of an anomaly of a scenario," Harris said. "I don't think we're overlooking them or whatnot with the guys they have out, but obviously, the way we started the game it's hard to believe that. I know personally, going into the game, them coming off the back-to-back, we needed to have more energy to start the game, more pop to us."

This is an unserious team playing unserious basketball. One only needs to look at the MASH units they've been losing to for an example of what it looks like to fight through adversity. And if the Sixers didn't lose because they overlooked this opponent, that's an even worse sign for the Sixers, who would simply be admitting what a lot of other people see right now — they aren't very good.