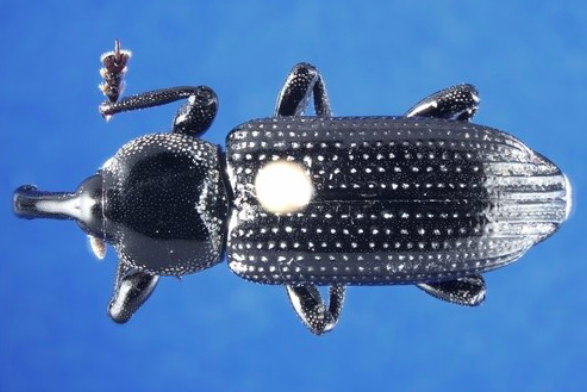 An adult weevil, identified as Amalactus sp. (Curculionidae), was found at the Port of Wilmington in a container of pineapples from Guatemala on June 11, 2019. The Central American pest is a threat to a variety of crops.

Two invasive insect species were discovered for the first time at the Port of Wilmington over the last month, Customs & Border Protection officials announced Friday.

Agriculture specialists said the first appearance occurred on June 4, when customs officers intercepted a container of cassava with a long-horned beetle inside. The container came from Costa Rica and was destined for Port Washington, New York.

Entomologists identified the species as Ozodes multituberculatus Bates 1870 (Cerambycidae), a Central American pest that can bore into wood and caus extensive damage to crop and lumber trees.

In the second case, on June 11, agriculture specialists found an adult weevil in a container of pineapples from Guatemala, destined for Wilmington. The species was identified as Amalactus sp. (Curculionidae), another pest of Central and South America. Weevils are a threat to grains and a variety of other crops.

The containers in both cases were fumigated, officials said.

“Customs and Border Protection’s agriculture protection mission is vital to our nation’s economic health, and these two first-in-port discoveries are evidence of our agriculture specialists’ tireless efforts to carry out that critical mission,” said Casey Durst, CBP director of field operations in Baltimore.