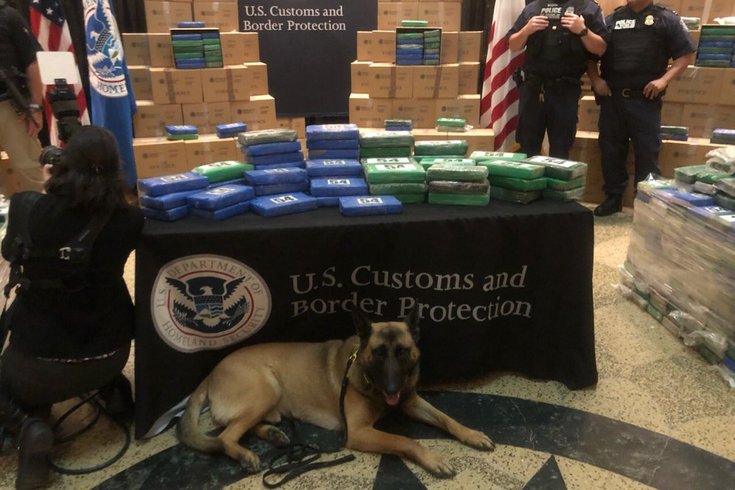 Six crew members of the MSC Gayane were in court Monday for their alleged involvement with the recent cocaine drug bust aboard the MSC Gayane — a container ship that was docked in the Port of Philadelphia last week. Seen here is part of the $1 billion cocaine stash that Montgomery County's K-9 unit helped uncover.

Six crew members were arrested and charged for their alleged involvement with the recent $1 billion cocaine drug bust aboard the MSC Gayane — a container ship that was docked in the Port of Philadelphia last week.

All six crew members face drug conspiracy charges. Five out of the six crewmen will remain in federal custody pending a trial following a hearing held on Monday. The hearing for the sixth defendant will be held at a later date, according to the Associated Press.

The six men have been identified as Ivan Durasevic, Nenad Illic, Aleksandar Kavaia, Bosko Markovic, Laauli Pulu, and Fonofaavae Tiasaga, according to NBC10. Tiasaga and Durasevic were the first charged last Thursday with conspiracy to possess cocaine. Four of the five suspects waived their preliminary hearings while the fifth suspect asked from a continuance through his attorney, which was granted by the judge.

The nationalities of the six crew members had not been confirmed as of Monday. According to an attorney, one of the defendants is from Montenegro. There were two interpreters present in the court room that spoke Serbian and Samoan with the defendants, according to the Associated Press.

The crew members allegedly admitted to helping load cocaine onto the cargo ship while it was at sea off the west coast of South America, according to an affidavit. Authorities said 14 boats approached the ship on two separate occasions. Records show the previous ports of call were the Bahamas on June 13, Panama on June 9, Peru on May 24, and Columbia on May 19.

Officials announced last week that 16.5 tons of cocaine – worth $1 billion – were found on the MSC Gayane, a Swiss-owned company ship, while docked in Philadelphia. CBS News reported last Wednesday that officials said there may be another 30 tons of cocaine – or 60,000 pounds – stashed onboard the vessel. As of Monday, agents were still scanning containers for narcotics.