Sheeran was born in Camden, to the son of a Philadelphia house painter, and grew up in Delco 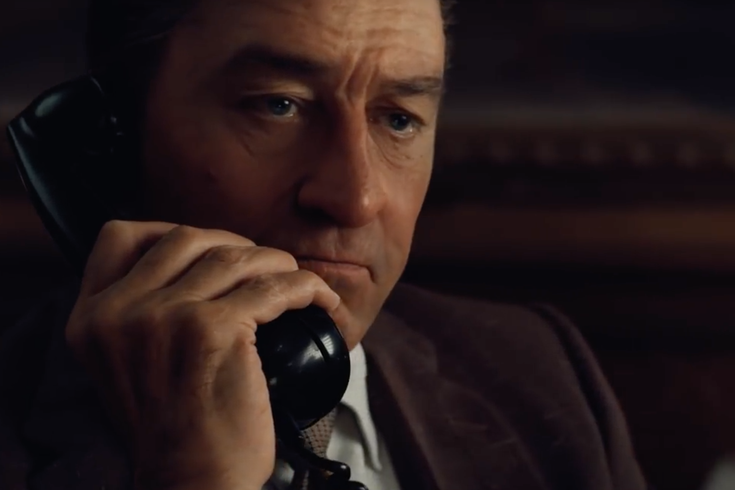 In Martin Scorsese's new film 'The Irishman,' Robert De Niro plays Frank Sheeran, a Philly-area union leader involved in the mob who was allegedly involved in the disappearance Jimmy Hoffa.

The idea of Martin Scorsese corralling Robert De Niro, Al Pacino, and Joe Pesci for another gritty crime film might not scream "must-see" the way it used to, but Philadelphia moviegoers should have a particular interest in the just-released trailer for Scorsese's upcoming film "The Irishman."

The film, set to hit theaters this fall, tells the story of Frank "The Irishman" Sheeran, a labor leader and alleged mafia hitman who was born in Camden and grew up just outside of Philly, in Darby, Delaware County.

MORE: 'The Irishman' review: Scorsese's mob drama is worth the hype

Sheeran lived in Philadelphia during the 1970s, when he was president of a Wilmington workers' union, and he was also a World War II veteran.

You can watch the trailer below — and keep an eye out for an old-school Pennsylvania license plate appearance around the 1:33 mark:

The film is based largely around the 2003 book "I Heard You Paint Houses" by Charles Brandt, which told the story of Sheeran's life and his career with the mob. (The book's title is taken from Sheeran's father's profession as a house painter in Philadelphia.)

Among other noteworthy revelations in the book, Sheeran claimed he was at least partially involved in the 1975 disappearance of legendary union leader Jimmy Hoffa, who will be played by Pacino, according to the Hollywood Reporter.

According to New York Film Festival organizers, the film centers on Sheeran and Hoffa, "friendship and loyalty between men who commit unspeakable acts and turn on a dime against each other, and the possibility of redemption in a world where it seems as distant as the moon." That's quite a teaser.

The film will debut at the New York Film Festival on Sept. 27, and will be released in theaters the same day.