IronPigs to become 'Lehigh Valley Cheesesteaks' for one game 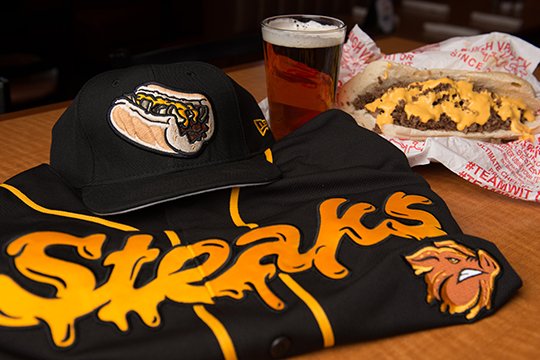 The Lehigh Valley IronPigs will become the "Cheesesteaks" for a June home game.

The marketing team for the Lehigh Valley IronPigs, the Philadelphia Phillies' Triple-A affiliate, has either — depending on your point of view — reached new heights or jumped the shark with their unashamed obsession with meat-based products.

The team announced Tuesday that during their June 10 home game against the Durham Bulls they will embrace the most stereotypical of Philly delicacies and literally become the Lehigh Valley Cheesesteaks.

We're changing our name to Cheesesteaks for Salute to Philly Night on 6/10 https://t.co/aiZbUYPE0F #RaisingTheSteaks pic.twitter.com/KSdH2JTvZ9

It's part of the team's "Salute to Philadelphia Night," and the Pigs are going all out. Players will be decked out in black uniforms with "Steaks" written in the style of dripping, gold Cheese Whiz. They've even included the classic Wit or Witout debate: fans can vote on which hat the team wears that night between a cap showing a steak with onions and one with just cheese.

If all that's not enough, they've released a video in which Allentown starts dramatically transforming into Philly, with The Morning Call morphing into The Philadelphia Inquirer and the anchor for WFMZ69 News becoming CBS3's Ukee Washington, who — of course — sings a modified version of the "Fresh Prince of Bel Air" theme.

Remember, this is the same team that offers bacon-themed merchandise, serves bacon on a stick at their stadium and has people in meat costumes race around the stadium in between innings.

Whether you love or hate the steak theme, the team's out-of-the-box approach to selling their brand seems to be working. The team has finished in the top four in average attendance in the International League each of the past three years and the launch of their bacon merchandise saw sales go through the roof. Naturally, there's a bunch of cheesesteak shirts, hats and socks available at the IronPigs' online shop.