The historical relics were found by an antique collector, but they do raise questions about modern recycling initiatives 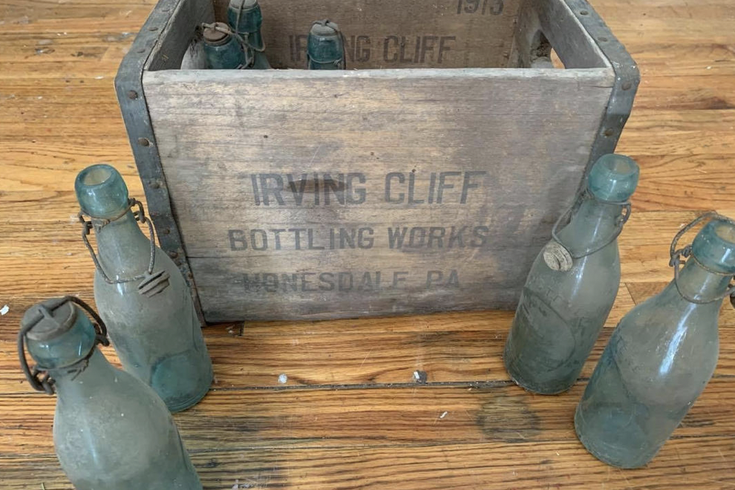 An antique collector in Northeastern Pennsylvania found a 1913 Original Irving Cliff Brewery wooden beer crate with seven Blue Flint cork and cage bottles. As a tongue-in-cheek joke, he returned them to the brewery to collect the bottle deposit that the state abandoned decades ago. Could it ever come back?

The story of bottle recycling in the United States revolves around the cost and capacity of manufacturing, the evolution of containers and the country's fitful efforts to organize consumption patterns in ways that reduce environmental harm.

The lobbying clout of beverage producers protecting their bottom line can't be ignored, either.

From today's vantage point, it's hard to imagine there was a time when glass bottles were widely returned for a deposit of a few cents. Until glass blowers were replaced by machines and industry scaled up significantly in the early 20th century, glass bottles were expensive to produce. It made sense to return and reuse them in most settings.

The deposit-refund system was created by the beverage industry as way to guarantee the return of their glass bottles, ensuring that they could be washed, refilled and resold more cost-effectively than mass-producing them.

Consumers getting refund value for bottles was common through World War II, when materials shortages and rationing were a part of life, but container deposits gradually fell by the wayside as mass-produced cans and plastics became more prevalent in the subsequent decades.

It wasn't until the 1970s that some states realized bottle deposit legislation might be a viable path toward reducing litter and picking up easy revenue from unclaimed deposits. Getting such legislation passed broadly in the U.S. hasn't been easy, however, since it's no longer in the interest of the beverage industry.

Only 10 states have bottle deposit laws in 2021. Private sector bottlers have largely abandoned their refund programs because curbside recycling changed the way consumers behave and deposits are now seen as an unwelcome cost for distributors. Plastic bottles, which are most frequently made of polyethylene terephthalate, or PET, also don't hit maximum recycling value for reclaimers due to contamination by other recycled materials.

But a Pennsylvania antique collector's trip down memory lane this month offers reason to give some thought to the mechanism and purpose of bottle deposit laws in the present day.

The collector stumbled across an old, dusty wooden beer crate with cork and cage bottles from Irving Cliff Brewery. One of Pennsylvania's most enduring breweries, ICB was founded in 1851 in Honesdale, Wayne County, and still boasts a popular list of signature brews.

In a Facebook post earlier this month, the brewery shared a photo of the wooden crate and seven Blue Flint bottles from 1913, when Woodrow Wilson was president and R.J. Reynolds introduced Camel as the first packaged cigarette, to put it in perspective.

MAN RETURNS BOTTLES FOR DEPOSIT AFTER 108 YEARS! A local antique collector was cleaning out an old storage shed when he...

"Being an ICB customer the man brought the crate back to the Brewery for the Deposit," the brewery said. "Calculating today's 5 cent return on each bottle plus 108 years of interest, the man settled for $60."

Irving Cliff Brewery, which maintains a restaurant and continues to hold events, plans to display the crate and bottles among other historical items.

It's a quaint story, but there has been some recent consideration in Pennsylvania to enact a five-cent bottle law.

Before the pandemic, state Rep. Wendy Ullmam, a Democrat from Bucks County, and Democratic state Sen. Sharif Street, of Philadelphia, both proposed a bottle bill as a means of reducing litter. The 10 states that have such laws show higher rates of recycling and overall improvements with litter because the value of bottles and cans is understood.

Under the proposed bill, Pennsylvania consumers would pay a 5-cent deposit per beverage container at the retailer or distributor. To incentivize recycling, consumers would get the money back when they take the bottles to a redemption center.

If consumers don't return their glass or plastic bottles and aluminum cans, their 5-cent deposits would be claimed by the state and put into the Hazardous Sites Cleanup Fund. Proponents of the bill say it would reduce the millions of dollars PennDOT spends annually to clean up litter. Low-income areas, in particular, might see cleaner streets if picking up discarded bottles and cans were incentivized.

But in Philadelphia, where the soda tax faced staunch opposition and remains a point of contention, the addition of another cost carried on price stickers by retailers would face local resistance on top of the pushback from bottlers.

A spokesperson for Sen. Street said the legislation is still under consideration and hasn't been forgotten, though it admittedly has not been a priority among other environmental initiatives that enjoy more consensus. Since Republicans hold a majority in the General Assembly, the bottle deposit bill simply hasn't had the momentum its Democratic supporters believe it would need to have a realistic chance of passing.