Privacy advocates petition high court to shut it down 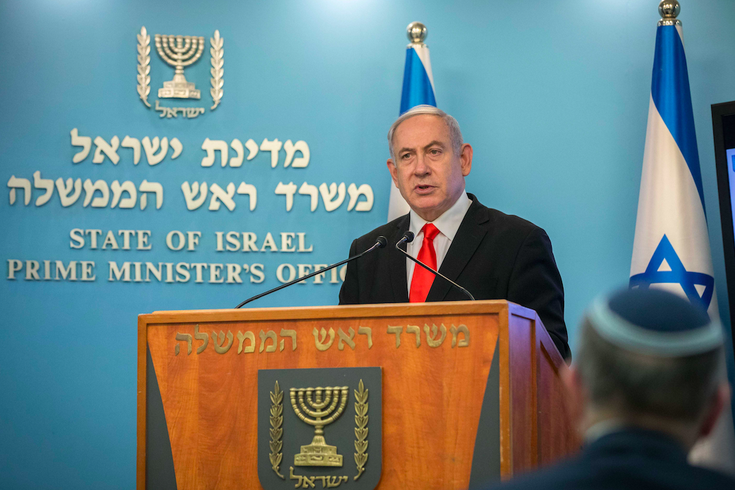 The Israeli Health Ministry is tracking the spread of the coronavirus by using cell phone tower data, sending text message alerts advising individuals to enter quarantines if they were in close proximity to positive cases of COVID-19. Privacy advocates and opponents of the program have petitioned the country's High Court to shut it down. Prime Minister Benjamin Netanyahu, pictured above, said this week the country is in "emergency mode" to prevent the spread of the illness.

The Israeli government has deployed aggressive surveillance measures to contain the spread of the coronavirus, using controversial technology to track the movements of people with COVID-19.

Israeli citizens have begun to receive text messages informing them that they were in the vicinity of a coronavirus carrier, according to The Times of Israel.

“Dear Marina, According to epidemiological research, you were close to a coronavirus carrier on March 6, 2020," said a text message obtained and published by a local broadcaster, shown in the tweet below. "You must go into isolation until March 20, 2020 in order to protect your relatives and the public…”

The technology, announced Wednesday by the Health Ministry, has come under fire from privacy advocates and those who question the legality of its approval. It has been challenged in Israel's High Court of Justice, which is considering a petition to halt it from continuing.

Administered by the Health Ministry's Shin Bet security service, the electronic tracking program uses phone data from cell towers to follow the prior movements of people who test positive for COVID-19.

Individuals whose phones were within two meters of infected people for more than 10 minutes during the previous two weeks will receive a text message similar to the one above. The length of their quarantine order is based on how many days have passed since the possible exposure occurred.

Health Ministry officials have argued that the technology serves as an efficient automated form of contact tracing.

“In order to make the process of conducting an epidemiological investigation more efficient, to shorten the process and accurately reach those who were in contact with a coronavirus carrier, we are starting to use technological tools,” the Health Ministry said in a statement.

Critics of the technology, including many in government, have challenged the lack of parliamentary oversight that had been promised beforehand. The Health Ministry claims the government only has access to location information, not the data stored on cellphones.

Israel had 529 confirmed cases of COVID-19 as of Thursday afternoon.

In the United States, where more than 10,750 coronavirus cases are confirmed, privacy concerns have arisen over the deployment of Google's Verily-built platform for COVID-19 test registration in California.

The platform, which uses the same framework as Verily's Project Baseline, collects health data that may be distributed to third parties and health agencies for research purposes. Google claims data will not be used for advertising and will not be joined with data stored in a user's individual Google account, unless expressly authorized.

While President Donald Trump has suggested Google's testing registration platform would be introduced for widespread use, the company clarified it would only begin with trial runs in two counties near the San Francisco Bay. The site had reached capacity by Monday morning.

As the coronavirus pandemic deepens, similar concerns about potential misuse of data and access to electronic health records may abound. Trade-offs for public health and safety could increasingly become an dilemma as governments, private companies and individuals around the world act to limit the spread of virus and manage their risks.