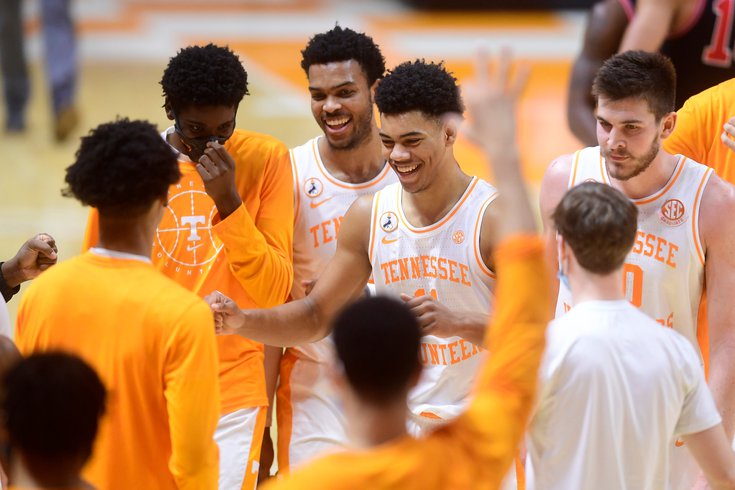 If you're here to read about Sixers draft pick Jaden Springer, I can only assume you don't find my initial take on Springer credible enough. What an outrage! But it's quite fair if you'd prefer to get takes from people who scout guys for a living, rather than writers like me who squeeze it in between the 82-game grind of the NBA regular season.

The Tennessee product has a lot of fans across the draft community, though with Springer coming into college as a potential lottery candidate, many cooled on him as a lottery-type player as time wore on in the SEC. Sam Vecenie of The Athletic is a guy we've cited often throughout the mock draft process, and he broke the Springer argument down like so:

Springer has an exceptionally difficult game to project to the next level. He’s going to really have to add some different craft and counters, as well as change the way he does things. He probably can’t be a primary playmaker playing this much off two feet at the next level...There were some tough lessons he had to learn at the college level about how it impacted his efficiency. But there is a lot of talent here, too, and he’s exceptionally young having been drafted at 18 years old. I wouldn’t doubt him figuring out how to adjust the way he plays in order to be successful.

At the end of the day, all that matters is if he can shoot. If he figures out the jumper, he’s a terrific 3-and-D two-guard who can pinch hit at the one sometimes, take on tough perimeter defensive assignments with how good he is on the ball and hopefully provide value on offense. The road really isn’t that far, even if the upside is something more in the range of an effective role player as opposed to a star. I just don’t know that I’m quite there on wanting to be the person who pays a premium draft pick to find out if he can get there, though. More in the mid-first seems right.  [The Athletic]

That's not exactly the crystal clear fit a lot of Sixers fans would have been hoping for here, especially with some guys like Jared Butler still on the board. Philadelphia, a team that is ostensibly trying to compete for titles in the immediate future, doesn't necessarily have a ton of developmental reps to dole out to teenagers.

Most teenagers, though, are not coming to the table with the defensive instincts and intensity Springer brings to the table. While the Sixers wait to see if Springer's low-volume, high-efficiency shot at Tennessee translates (most scouts are skeptical based on his mechanics), they will be able to lean on him as a point-of-attack defender who adds some toughness to the second unit.

Over at draft blog The Stepien, CJ Marchesani went over Springer's game in some detail earlier this year, pointing out Springer's defensive credentials at a young age (and invoking a comparison to a hated Boston rival):

Jaden Springer’s calling card as a defensive prospect is his point of attack defense. The freshman hounds ball handlers, using a combination of lateral agility, quick hands and a stocky frame to create events and stonewall drivers. Springer also has a strong lower body that allows him to hold his own against potential mismatches in the post. This combination of agility and strength allows Springer to slide to defensive matchups that would usually be off-limits for a 6’4” guard. In the SEC Semifinal game against Alabama, Springer spent time guarding both 6’1” speedster Jahvon Quinerly and the much stronger 6’8” Herb Jones.

During his freshman season at Tennessee, Springer posted a steal percentage of 2.7% and a block percentage of 2.0%, impressive numbers for a 6’4” guard with an average at best wingspan. For perspective, the only other high major freshman 6’4” or shorter with a steal and block percentage over 2.0% was Duke’s DJ Stewart with a 2.0 STL% and a 2.1 BLK%. The point of attack prowess and post strength has led to some Marcus Smart comparisons, but Springer has a shorter wingspan and lacks the same outlier motor as the Celtics’ do-it-all defender.  [The Stepien]

The wingspan difference is a definite point of separation between Springer and somebody like Smart on defense, and while Smart's motor is a high bar to clear on defense, everything about Springer's year at Tennessee suggests he's going to bring it on defense. He rarely takes possessions off, his mental reads show the care of a guy who digs into tape and anticipates where his man will go, and his pursuit does not end if he gets beat on an initial action. Every piece of Springer's defense comes naturally, working in conjunction like a basketball orchestra, arms and legs and hips moving together to get stops.

But we all know what you're here for. So feast your eyes on a months-old YouTube video that has already been updated to say "Welcome To Philly," and get what I assume is a first look for many of you at the Sixers' latest draft pick.