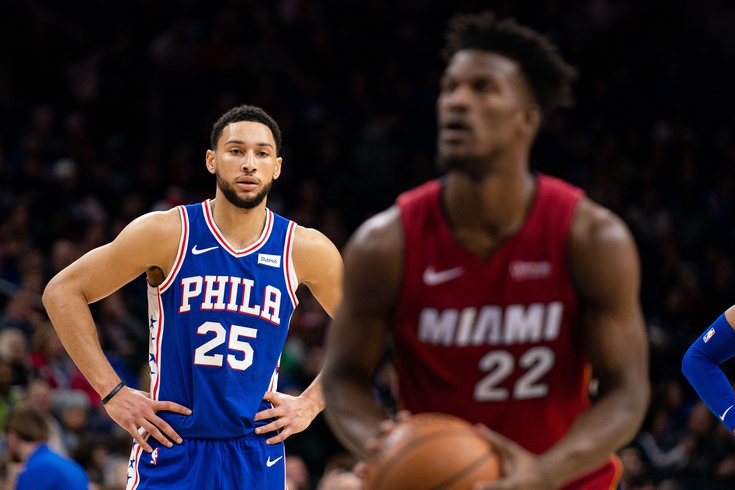 In today's edition of Ben Simmons trade rumors, a new team has emerged as a potential suitor for Philadelphia's young star. The Miami Heat are reportedly viewed as "one of the most likely landing spots" for Simmons in the event he gets moved, a plot twist that requires a bit of consideration.

This is the word from Sam Amick of The Athletic, who included this nugget on Simmons within a story about Milwaukee's title run and the Lakers' pursuit of more help around LeBron James:

Yet while Portland’s Damian Lillard and Washington’s Bradley Beal both appear to be in their respective holding patterns when it comes to possibly requesting a trade, it’s looking increasingly likely that Philadelphia’s Ben Simmons will be on the move. One source close to the situation handicapped Miami, Toronto and Washington as the most likely landing spots. The Wizards scenario, of course, would only take place if Beal wound up deciding that it was time for a new chapter outside of the nation’s capital. The moving parts, as you can see, are sometimes part of the same puzzle.  [The Athletic]

We've discussed Toronto and Washington as possibilities extensively, even when the Sixers have reportedly made wildly unrealistic proposals to the Raptors as part of the process. Miami, known to be in pursuit of stars at all times under Pat Riley, have basically never come up during the process, and their emergence now is something of a curveball.

One of the problems is finding a package that makes any sense for Philadelphia on the surface. The Heat have an assortment of interesting players but none of the guys you'd assume are available feel like potential headliners in a deal. Duncan Robinson is one of the league's most dangerous movement shooters who has shown defensive improvement over time, but he's a high-level role player at best and a restricted free agent this offseason. Tyler Herro gained plenty of attention for his play inside the NBA's bubble in 2020, and he has more potential as a creator than Robinson, but he struggled in an elevated role to begin the 2020-21 season and had a miserable series in Miami's four-game loss to the Bucks in round one.

The Heat are also down quite a few draft picks that could make up the difference in player value — they owe their 2021 (unprotected) and 2023 (lottery protected) first-round picks to Oklahoma City and all of their second-round picks from 2021-2027 to various teams around the league. That makes it quite difficult to imagine a scenario where the Heat can acquire Simmons in a multi-team trade, as they are likely unable to provide the draft ammo to assist Philadelphia in pursuit of a star elsewhere. Are first-rounders in 2025 or 2027 going to move the needle? That seems highly unlikely.

(Then there's the financial element. With Herro on a rookie deal and Robinson set to sign a deal in free agency somewhere, the Heat would likely have to attach another contract just to make the money work. With due respect to Andre Iguodala for his contributions in Philly and a terrific career, he's not exactly a great fit on a roster built around a post-up center.)

You could make the argument that a deal with Miami makes even less sense from Miami's end. Would either Simmons or Jimmy Butler have any interest in partnering once again? That seems pretty unlikely, given the iciness between the two men when they played together in Philadelphia and the conflict that stems from their clunky fit on the floor. Butler wants to control the offense and dominate the ball, and has long viewed himself as a point guard (or at least a primary initiator) who deserves to run the show. There's a different front office in place now, but the Sixers were essentially in a position where they had to choose between Simmons and Butler when the latter was a free agent in the summer of 2019. It seems unlikely Miami would invite the same problems the Sixers sought to avoid two years later.

Is there any chance Miami and Philadelphia could be drawing up a potential Butler-for-Simmons swap? That feels exceedingly unlikely. Putting Butler in Simmons' place would solve a lot of offensive woes for Philadelphia without taking too large of a step back on defense, and his relationship and partnership with Embiid would be front-and-center for the franchise. But he's not the cleanest fit in the world here by any means, with his years-long regression from three a pretty big deal playing next to Embiid. On Miami's end, perhaps Pat Riley sees an opportunity to put Simmons through the fires of "Heat culture" and turn him into the dominant star some still believe he could be. But trading Butler to do it? That doesn't seem like a move Riley would even consider, let alone sign off on, given his ever-present desire to collect as many stars as possible.

Beyond that, if the Heat were making Butler available after two ultra-productive years in Miami, wouldn't that further confirm all the worst things you hear about him as an organizational presence? The Sixers were able to get the best out of him during the honeymoon period, and even that featured squabbles with core members of the team. Maybe you'd rather take that risk than bank on Simmons' development, but it's not a sure bet by any means, before we even consider the wear-and-tear on Butler from the grueling workload he's carried over the years.

It's likely a moot point because retaining Butler and adding another big piece on top of their core is the likely path Riley will pursue this offseason. It's why they've been mentioned as a potential suitor for Kyle Lowry, who would make a lot of sense as a backcourt partner for Butler and a third member of the core along with Bam Adebayo.

I'll be honest with you, I just don't see the fit here and can't really make sense of it from either team's perspective. Amick has good intel and is worth taking seriously whenever he connects a few dots, but someone smarter than me is going to have to tell me how this would add up.