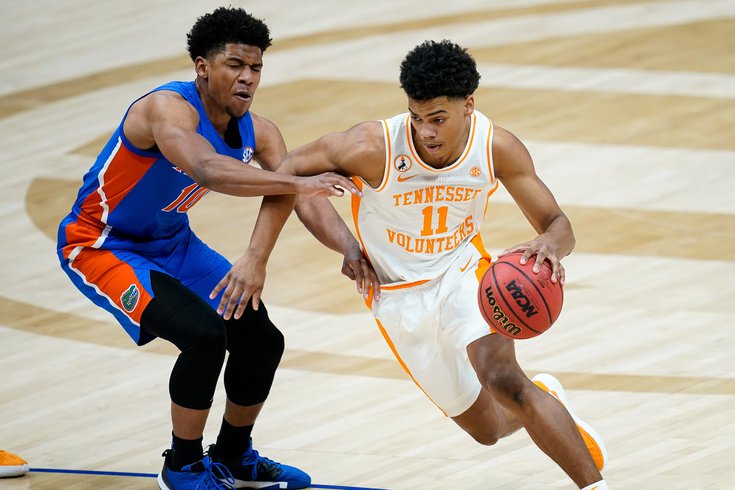 The Sixers selected Jaden Springer with the No. 28 pick in the 2021 NBA Draft, opting to go with a tough defender with upside in the final moments of the first round.

Springer was considered a legit lottery candidate for most of this season for good reason. He's among the youngest guys in the class — Springer doesn't turn 19 until late September — and the consensus five-star recruit flashed a lot of potential during his lone season with the Volunteers. And the Sixers are expected to keep Springer rather than dangle him in trade talks according to a team source, with the team happy for the second straight year about the way the board broke for them.

His calling card right away will most likely be his defense, with his lateral quickness and tenacity an excellent starting point for a player who will be tasked with guarding the point-of-attack at the next level. Springer is going to bother a lot of guys in the pick-and-rolls dominating the league right now, getting up into defenders and sliding through and around screens to stop opponents from getting where they want to go. His hands are active, he competes his butt off, and while Springer is not the biggest or longest guy in the world at 6'4" (6'8" wingspan), he's big enough to be switchable across backcourt players.

The other side of the ball does feature some positives, most of them connected to his scoring potential. He's already pretty good at using his body to initiate contact and finish amongst the trees, and Springer showed the ability to utilize the pressure he creates as a finisher as a setup man on the interior. Springer is also an unselfish player and sets the pace of a possession rather than letting defenders speed him up or get him off track. I have no doubt he'll drop some interior passes off to Joel Embiid.

There are questions about his ability to create separation at the next level, and shooting will be a big swing skill. Springer's three-point and free-throw numbers suggest he could be an effective floor spacer with time, but Springer was a low-volume shooter and has a lot of work to do as an off-the-dribble threat. He isn't exactly a high-volume or high-efficiency guy as a pull-up shooter — Springer ranked near the bottom of all shooters who attempted at least 50 pull-up jumpers last season, where he's more of an idea than a threat at the moment.

The Sixers don't need hesitant shooters surrounding Embiid, and Springer's ability to get to the cup as a pro will be directly connected to the attention teams are forced to pay him outside. Even still, he's a great value selection this deep in the first round, a player who you can plug into a bunch of different lineup styles and succeed with.

Springer being drafted by the Sixers brings some family history full circle — his father, Gary, was a sixth-round pick of the organization way back in 1984, but never got a chance to suit up for the organization as a result of injuries (or at least that's the story told in dusty articles from newspapers who chronicled deep-round prospects at the time). Either way, it's a pretty cool story, with the elder Springer's son getting a chance to live out his dream at this level.

Ultimately, Springer's story at this level is going to hinge on the work he puts in and Philadelphia's ability to bring him along and improve his craft. If you take his competitive fire at the defensive end and use that as an indicator of his care for the game, Springer seems like a good guy to bet on to improve. With the team raving about their low-minute group last year, he'll also be joining a group of young guys who will make each other better by putting pressure on their peers to succeed. And frankly, if he can become a reliable shooter, that along with his defense will be enough to make him a solid role player, with room to be even more if he can add another skill or two to his game.