Program helps reverse commuters get to jobs in Philadelphia suburbs 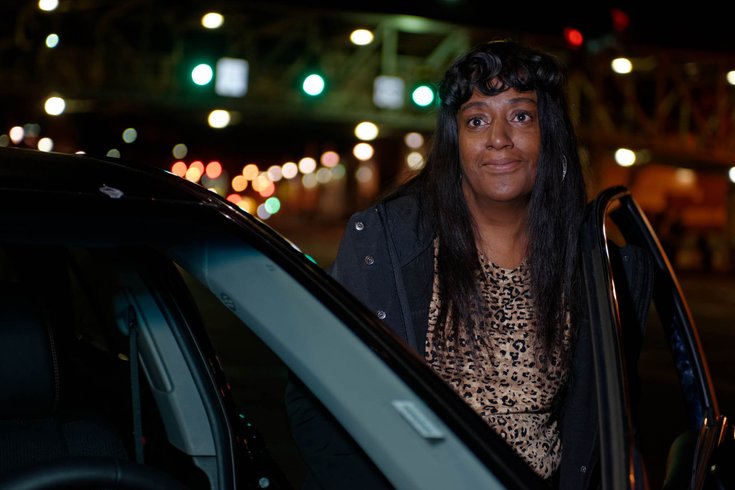 On her way to pick up colleagues in a Commuter Options vehicle, Junanita Bynum stands near the 69th Street Transportation Center in Upper Darby on a recent morning. She picks up colleagues in and around the city and then heads for their workplace in Horsham, Montgomery County.

Junanita Bynum wakes up at 4 a.m. every weekday to prepare for her commute to her job in the medical billing department at Quest Diagnostics in the Montgomery County suburbs.

To get there from Bynum’s home in Upper Darby would take more than two hours via public transit. Getting to work in time for her 6 a.m. shift is impossible, in fact, as SEPTA routes are all closed for the night.

But Bynum doesn’t have to rely on SEPTA. Instead she has access to a car through the Philadelphia Unemployment Project’s Commuter Options program. In the morning she drives into the city, picks up a few coworkers, and then begins the 40-minute trek out to the unassuming three-story office building in Horsham where they spend the day fielding phone calls from patients.

“If you want to get people out of poverty you need to get them access to well-paying jobs. But in the city its mostly low wages, while in the suburbs we can get good $13-$16 an hour jobs. Of course it’s a lot trickier to commute to the suburbs." – John Dodds, director, PUP

“The company is good…We have good pay and benefits, and there is room for advancement,” says Bynum on a recent morning as she pilots her car through the dark and empty streets of pre-dawn West Philadelphia. “Most of the jobs I had before this were in the city. After I came from [a job] at a nursing home, I was at a check cashing store on 52nd Street. There was only one bus taking me there, but I got robbed one morning during opening. I actually got hit with the back of a gun. I won’t go into a check cashing store anymore, I won’t even go into a bank in Philadelphia.”

Bynum’s traumatic experience on 52nd Street led to severe psychological and physical distress, which kept her out of work for a year as she recovered. (It also propelled her into Upper Darby and out of West Philadelphia.) Her job with Quest, which provides clinical laboratory services, not only pays better but it is safer, too. But it would have been much harder to retain the position if she hadn’t started working at Quest right around the time that Commuter Options, and its fleet of carpool-ready vehicles, were launched.

GETTING TO THE BURBS

The Philadelphia region suffers from an unusually high degree of job sprawl, even as Center City and the neighborhoods around it have revitalized and gentrified. Many of the best jobs in the area are no longer located downtown, at the hub of the expansive public transportation system. Instead they are scattered across the suburban counties, where the effectiveness of mass transit is hobbled by the lack of population and job density – not to mention the lack of services to safely get riders from stations to office parks.

A series of studies from the Brookings Institute highlight just how bad Philadelphia has it. A 2013 report shows that 64 percent of the region’s jobs are located between 10 and 35 miles away from urban centers. In 2011 the same think tank noted, “Chicago and Philadelphia – home to two of the oldest and best-known transit networks nationwide – rank lower on job access via transit than Houston and Los Angeles, both of which are known as auto-dominated metro areas.”

“We have been working on reverse commute since the 1980s, it’s just an integral part of what we do now. All these employers in the suburbs couldn’t find employees, so a lot of pressure was put on SEPTA at that time." – Steven D’Antonio, SEPTA’s manager for city service planning

A recent Harvard study about economic mobility found that, in the words of the New York Times, “commuting time has emerged as the single strongest factor in the odds of escaping poverty.” But for low-income workers, affording a car is a real challenge. So the likelihood of a long commute to the suburbs is greatly increased.

“If you want to get people out of poverty you need to get them access to well-paying jobs,” says John Dodds, director of PUP. “But in the city its mostly low wages, while in the suburbs we can get good $13-$16 an hour jobs. Of course it’s a lot trickier to commute to the suburbs. It’s almost impossible, unless you work first shift and then it's actually just as impossible. Even if we were going to honeycomb the counties with bus routes – and the way things are now there’s no way in hell we are going to – the work is all over the place.”

Commuter Options got its start with an earmark secured by U.S. Representative Chaka Fattah of Philadelphia through the Job Access Reverse Commute program (JARC). Using these funds at the time, PUP built up a fleet of 36 minivans. Each rider paid a $6 round trip for what amounts to door-to-door service. (The costs per rider went up if all the seats weren’t taken.) The vans were owned by PUP, but the drivers could keep them during weekends and off hours. They were also responsible for putting fuel in the vehicles, collecting money and taking care of the receipts. 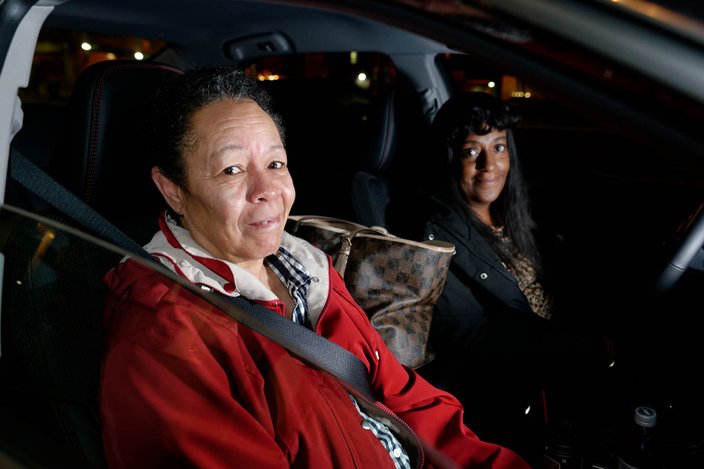 Linda Jacobs-Bailey of Southwest Philadelphia, left, is the first passenger picked up in the morning by driver Junanita Bynum. (Bastiaan Slabbers / For PhillyVoice)

But in the tumultuous years following the Great Recession, funding for the JARC program in Philadelphia was cut in half, then eliminated. Today, PUP relies on a greatly reduced pot of money, down to $395,000 this year from the $1.5 million it received in its first year of operation. The program is a shadow of its former self, reduced to about a dozen rental vehicles from Enterprise Rent-A-Car. The drivers and passengers must combine to pay a $24 daily fee for each vehicle. (More passengers means less out of each rider's pocket.) Today the money largely comes from PennDOT and is routed through SEPTA.

For the transit agency, of course, PUP’s Commuter Options program is just one of a huge number of strategies to get Philadelphia workers out to their jobs in the suburbs.

“We have been working on reverse commute since the 1980s, it’s just an integral part of what we do now,” says Steven D’Antonio, SEPTA’s manager for city service planning. “All these employers in the suburbs couldn’t find employees, so a lot of pressure was put on SEPTA at that time. We integrated our work on reverse commuting into the program so much that we don’t even think of it as a special program. We are just constantly working on route changes to accommodate our markets both in and out of the city.”

D’Antonio counts 26 routes largely devoted to reverse commuting, although three are operated by county Transportation Management Associations – the Bristol and Warminster Rushbuses, and the Quicksilver that delivers workers from Chester city to suburban job hubs. SEPTA’s main routes are also aided by a web of private and non-profit shuttle agencies like the King of Prussia Business Improvement District’s shuttle services, which coordinates with the transit agency to ensure transport to the office park will be waiting when trains arrive at Wayne Station. Similarly, SEPTA's Route 201 bus shuttles workers from the Fort Washington train station to several stops in the nearby Fort Washington Office Center.

SEPTA representatives say there is no way to measure whether current efforts are meeting demand. But there are certainly still numerous worksites that are too remote or don’t have the density to afford a dedicated line. Most employers don’t have the means or will to provide transportation themselves. Programs like Commuter Options can fill the gap, says Dodds, who hopes to secure more funds to grow PUP’s fleet in the coming year.

Bynum, for one, very much hopes the program will survive and prosper.

“They told me for a while they might have to stop, so I’ve been thinking I need to start saving up to buy another car,” says Bynum. “People think ‘just buy your own car.’ I had a car before but every car I ever had had issues with it. It’s not that easy, especially if you are by yourself. Even though I’m working up here, I work to pay my bills. You have to buy stuff for the kids, and food. I have to pay my mortgage. Everybody can’t just go and buy a car.”