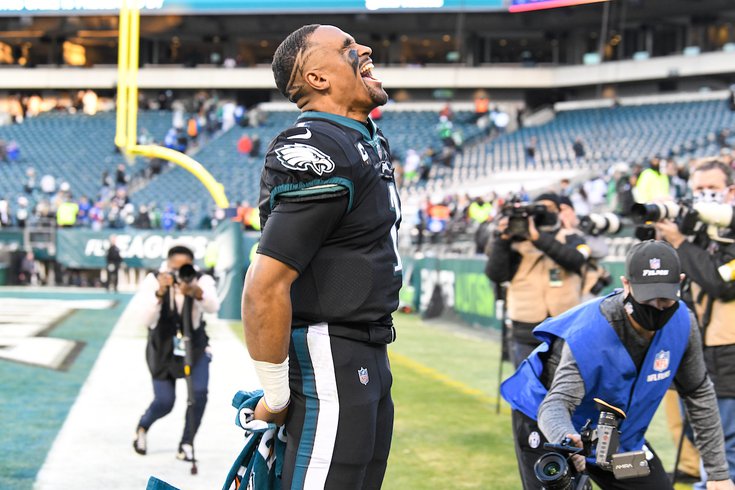 There's less than a month until the Eagles begin training camp down at the NovaCare Complex in South Philly. I am already in football mode and I'm sure a large portion of the Philadelphia region is as well. I found some over/unders for Jalen Hurts' statistics this upcoming season via sportsbetting.ag. People love debating Eagles quarterbacks and a lot of people love gambling too, so let's roll with it!

In the 2021 season, Jalen Hurts passed for 3,144 yards while only playing in 15 of the Eagles' 17 games. Assuming another year of development (not guaranteed!) for Hurts, plus break-out campaigns from DeVonta Smith and Dallas Goedert, this is in play. Factor in the trade for star wide receiver A.J. Brown too and I think Hurts narrowly eclipses that mark. I'll say he gets to 3,652 passing yards.

Hurts threw nine interceptions on 432 passes in 2021. His interception rate of 2.1 percent was tied for the 11th-best mark in the league (minimum 400 pass attempts, via Stathead). He's not a turnover machine at QB. As I've alluded to, I expect Hurts and the Eagles to throw the ball more in 2022, but Hurts is wise enough to not force throws unnecessarily. I'll predict him to throw 10 interceptions this fall.

This is perhaps the most intriguing over/under for Hurts. As I've said, the Eagles will throw the ball more in 2022 than they did in 2021, but the team didn't switch to a rush-heavy attack that propelled them to a playoff berth until Week 8 or so last season. Despite that, Hurts still rushed for 784 yards on the ground (5.6 yards per attempt). I'm going under, but I don't feel good about it. I'll put him at 707 rushing yards.

To put things into context, Hurts ran for 10 touchdowns in 2021. He ran for three in 2020 in just four starts as well. There are more mouths to feed, yes, and Hurts should improve on his passing TD total from last year, but, come on, this dude is electric with the ball in his hands and is the perfect goal-line QB in today's NFL.

Coincidentally enough, I found this tweet on Thursday breaking down the Eagles' goal-line carries from 2021:

Jordan Howard is gone and some of those "power" carries are going to fall upon Hurts. I'm not 100 percent positive he reaches double digits again (Goedert and Brown should kill it in the red zone, right?), but I'm saying over with nine touchdowns on the ground. At the same time... if he went full 2011 Cam Netwon and had 14, I wouldn't be shocked.