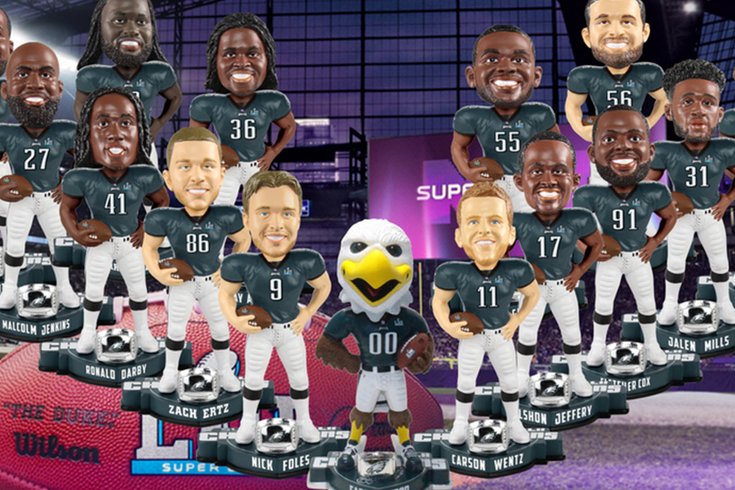 A full set of the Super Bowl-winning Eagles bobbleheads costs $1,100. At least a dozen fans have placed their orders.

Jason Kelce stole the show at the Eagles' Super Bowl parade, donning a Mummers outfit as he mingled with fans in South Philly and delivered a rousing victory speech.

Is there a better way to commemorate those moments than with a bobblehead of Kelce dressed in his purple, green and white garb?

Such a collectible might soon be on its way.

The National Bobblehead Hall of Fame and Museum in Milwaukee has created a set of 40 Eagles bobbleheads – by far, the largest Super Bowl collection the museum has ever created. The bobbleheads are manufacturered by FOCO.

Thanks to soaring demand and record-setting sales, the museum intends to add several special edition bobbleheads into the mix.

If Eagles fans use their imagination for a few seconds, Sklar said they likely guess correctly.

Given that criteria, it seems safe to anticipate a Kelce parade bobblehead and a Nick Foles "Philly Special" bobblehead.

"We have a couple connections that we're trying to work through to add [Doug Pederson] to the mix. He deserving of it, so hopefully we can make that happen." – Phil Sklar

And based on the sales of the initial bobbleheads offered by the museum, they'll sell quickly.

The museum typically creates bobbleheads of the top five players from each Super Bowl champion, Sklar said. Sometimes, that number stretches toward 10 players, based on demand.

Once – for the 2011 Green Bay Packers – the museum created 15 bobbleheads.

But the Eagles' set now includes an astounding 34 players. The full set, which sells for $1,100, also includes a Nick Foles MVP bobblehead, a Swoop bobblehead and four mini bobbles of Eagles fans in action poses. 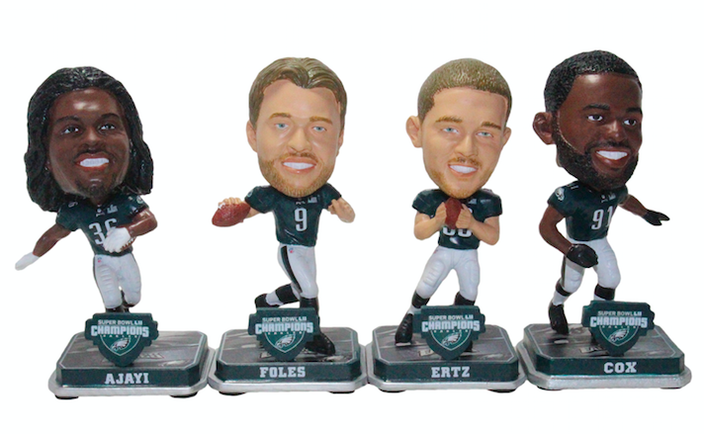 The museum kept adding players after fans requested the likes of Brandon Brooks, Halapoulivaati Vaitai and Stephen Wisniewski, among others.

Sometimes, Sklar said, bobbleheads are canceled when minimum sales are not met. But all of the Eagles bobbleheads have met those minimums.

"We kept getting requests for additional players," Sklar said. "More and more players were continually added to bring the amount to 34 unique players, which is pretty much double the previous record."

At least a dozen full sets have been sold, Sklar said.

Among the individual 8-inch-tall bobbleheads, which sell for $35 each, the likenesses of Nick Foles and Carson Wentz are the top sellers. 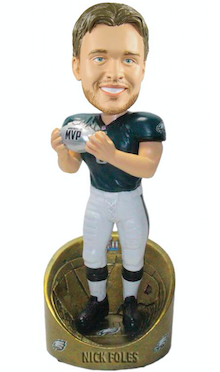 The National Bobblehead Hall of Fame and Museum produced a bobblehead of Nick Foles holding the Super Bowl MVP trophy.

"But they're followed closely by (Jay) Ajayi, Alshon Jeffery and Zach Ertz," Sklar said. "Swoop has been extremely popular, as well. The iconic mascot – he won't get traded or anything. He'll always be a safe bet."

But there remains one individual who does not yet have a bobblehead – Doug Pederson.

Coaches are not under the same licensing agreement as the players, Sklar said. But the museum is working to get the rights to produce a Pederson bobble.

"We have a couple connections that we're trying to work through to add him to the mix," Sklar said. "He deserving of it, so hopefully we can make that happen."