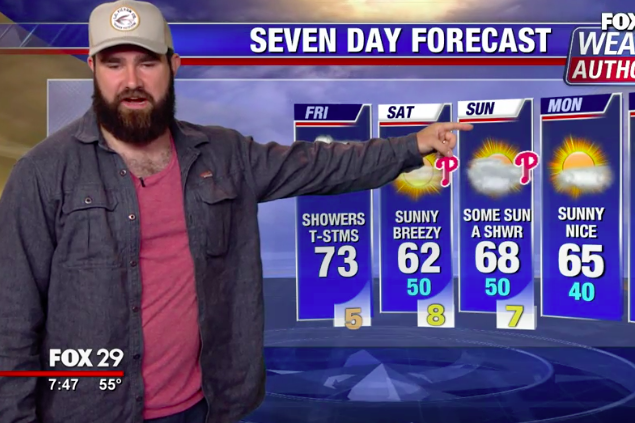 After a beautiful week in the Philadelphia area, rain finally arrived Friday to put a damper on things.

As a trade-off, Eagles All-Pro Center Jason Kelce joined FOX29 to give the weather report.

The segment began as usual with Sue Serio, but then Kelce wandered on-screen and took over narration duties for what's shaping up to be a nice weekend. Courtesy of Jason Kelce, here's the weather forecast for the coming week.

Kelce and Serio also snapped a good photo in for memories.

@jasonkelce_eagles_62 has a future in meteorology! Watch my Facebook page for a look at his forecast. And make sure you support the @philadelphiaeagles Autism Challenge! @fox29philly

The Eagles selected tackle Andre Dillard with their first-round pick in the 2019 NFL draft on Thursday night, adding another piece to an offensive line led by Kelce for much of the last decade.

As for Kelce, he'll be returning for at least one more season after the Eagles signed him to a contract extension in March.