The Villanova coach was joined on stage in Springfield by a trio of Philly legends: Charles Barkley, Herb Magee and George Raveling 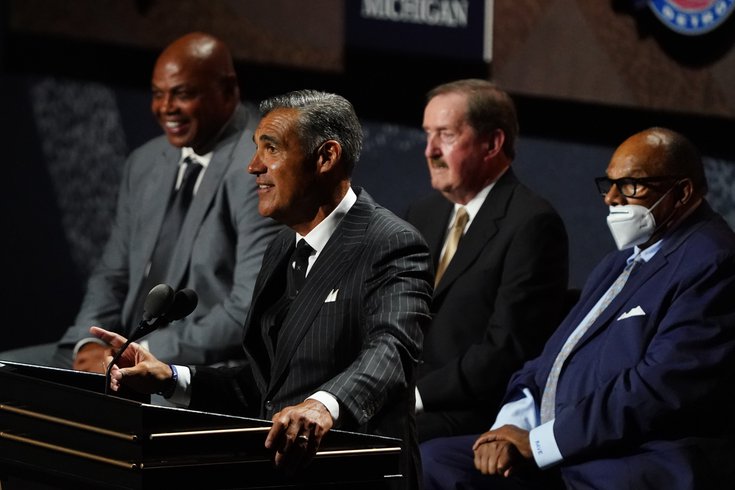 Villanova men's basketball coach Jay Wright was enshrined into the Naismith Memorial Basketball Hall of Fame on Saturday, Sept. 11, 2021. Wright, a Bucks County native, has coached the Wildcats for two decades and was joined on stage by Charles Barkley, Herb Magee and George Raveling.

Villanova coach Jay Wright paid homage to his Philadelphia roots during his induction into the Naismith Memorial Basketball Hall of Fame on Saturday night in Springfield, Massachusetts.

Wright, a Bucks county native who has led the Wildcats to two national championships during his 20 years at the helm, was joined on stage by a trio of Philly basketball legends: Charles Barkley, Herb Magee and George Raveling. Sixers great Billy Cunningham was also slated to present Wright to the Hall of Fame, but Wright said Cunningham could not attend the ceremony because he is recovering from a health issue.

"Each one represents a different aspect of Philadelphia basketball to me," Wright said of the fellow Hall of Famers. "I'm proud to have grown up in the great tradition of the Philadelphia Big 5, the 76ers and Villanova basketball."

Wright said he "learned to shoot and how to teach shooting" from Magee, who after 53 years coaching is set to retire from Jefferson University at the end of the 2021-22 season. Wright's relationship with the Shot Doctor dates back to his time as a player at Council Rock High School North in Newtown.

"Coach Magee recruited me out of high school and continuously reminds me I would have made something of myself had I played for him," Wright said.

Wright and Barkley go back to the mid 1980s, when Wright was an assistant coach at Drexel and Villanova while Barkley starred for the Sixers.

"His talent, passion and personality inspired all of us as players and coaches," Wright said.

Both young in the game of basketball and single at the time, Wright and Barkley spent lots of time out together at local bars. In fact, Barkley's wife, Maureen, went to high school with Wright.

"As crazy as he is, if he's your friend, he's loyal for life," Wright said.

Wright called Raveling a "role model." The 84-year-old led the Wildcats to two NIT appearances as a player and broke barriers as the first Black coach in the Atlantic Coast Conference and the Pac-12.

"His life is an example of everything a Villanova basketball player aspires to become, a great player, a lifetime leader (and) a man who lives for others," Wright said.

Wright was named the head coach of Villanova in 2001. In addition to winning NCAA championships in 2016 and 2018, he has coached the Wildcats to 12 Big 5 titles, eight Big East regular season titles, four conference tournament titles and three Final Four appearances. He also has an Olympic gold medal to his name as an assistant coach with the U.S. men's basketball team during the 2021 Summer Games.

Accepting his spot among basketball royalty Saturday night, Wright made sure to credit his support system. He thanked his three children for their sacrifices and said his wife, Patty, is the "perfect coach's wife" who keeps him out of trouble

"Left to my own devices, I probably would have screwed this coaching thing up, but thank God Patty's been my guiding light," Wright said.

Wright's parents were also in attendance. He said his mom is his "biggest fan" and called his father "the best coach I ever played for," although it took him a while to warm up to the game of basketball.

"He once told me basketball was not a tough-guy sport," Wright said. "After I told him basketball was my favorite sport, he fell in love with the game and did everything he could to help me succeed."

Watch Wright's Hall of Fame induction speech in full below.