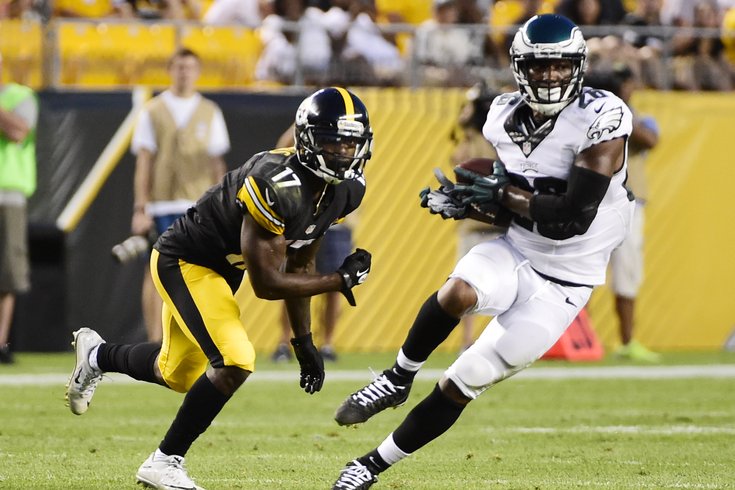 Jaylen Watkins' tackling has improved, in that he now tackles.

When the Eagles drafted Jaylen Watkins in the fourth round of the 2014 NFL Draft, they liked him because of his positional versatility. At the University of Florida, Watkins played outside corner, slot corner, and safety.

He has also played all three spots so far in his short time in the NFL. By far, Watkins' biggest deficiency has been his tackling, or lack thereof. For example, against the Cardinals last season, watch #37:

In watching film of the defense upon his arrival in Philadelphia this offseason, defensive coordinator Jim Schwartz easily identified that deficiency.

"Jaylen has a skill-set of corner-safety," said Schwartz. "[He] played both at Florida. We've moved him to safety to try to take advantage of that. His challenge had always been tackling and run game. Last year if you watched a little bit of him, that's where he broke down a little bit, and early in camp this year, that's where he broke down. I think he's worked very hard and the coaches worked very hard with him to address that. And you're seeing the results of that. He's playing more aggressively in the run game. And there are times that safeties can play aggressively and there's times where they can't."

Watkins has been more aggressive with his tackling in the first two preseason games. For example, against the Steelers, Watkins made tackles on three consecutive plays, shown here (Watkins is #26):

While nobody is going to confuse Watkins for Steve Atwater, that is a significant improvement from what we've seen over the first two years of his career.

"I understand the run game," said Watkins. "(My improvement) isn't about understanding it. It's about getting in more positions to do it. That's what the preseason is for. I had three (tackles) last week. Will I get four this week, and can I make all four? The more I do it, the better I get at it."

In coverage, Watkins has also been good. He had several pass breakups against the Buccaneers, and an interception against the Steelers. But again, it was already known that coverage was his strength.

"When you're the last line of defense, you've got to get that guy on the ground however you can," said Schwartz. "But sometimes when there's leverage or holes to fill, you need to be a missile and you need to go fill it. He needs to do a good job of that. He's on the right track. We need to keep seeing improvement from him. I'm very proud of him. He's done a really good job. It's easy to work on your strengths. He's really shown that he's willing to work on his weaknesses and it's shown on the field."