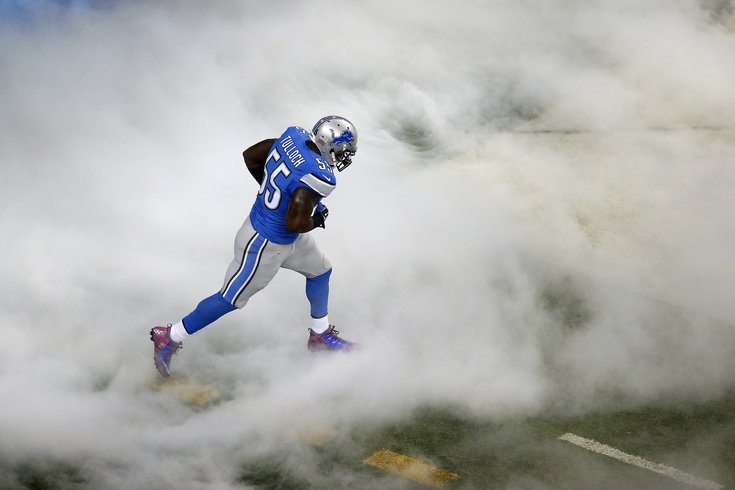 Former Lions middle linebacker Stephen Tulloch, who officially signed with the Eagles on Tuesday, runs through smoke prior to a game in Detroit last season.

Ten years ago, then the defensive coordinator for the Tennessee Titans, Jim Schwartz went to bat for North Carolina State linebacker Stephen Tulloch, whom he believed to be the best linebacker still available in the fourth round of the 2006 NFL Draft.

Schwartz convinced the Titans to draft the undersized Tulloch over another linebacker. And, now entering his 11th NFL season, he's reuniting with not only the guy who helped him break into the league, but the coach under whom he he spent six of his first 10 seasons.

Here's how Tulloch remembers that day:

Stephen Tulloch on how Jim Schwartz (then the Titans DC) went to bat for him prior to 2006 NFL Draft... #Eagles pic.twitter.com/NkEkR3MO8d

It may seem like a contrived, or perhaps just convenient, sentiment. But it's not.

Tulloch, who arrived in Philadelphia on Tuesday to sign a one-year deal with the Eagles worth up to $3 million,  even admitted that there were several other teams interested, but his familiarity with and respect for Schwartz tipped the scale in the Eagles 'favor.

"I've got a lot of love and respect for Coach Schwartz," he said. "I always thank him for the opportunity I had in Tennessee, for having him draft me -- or push to draft me back in 2006 when nobody else really wanted to go after me. And so, when he called me, I wanted to come in here and help this team."

Now with a new team, but playing in a familiar system -- Tulloch last played for Schwartz in 2013 (Detroit) -- the newest member of a defensive unit that's expected to be a strength for first-year coach Doug Pederson should help add depth at linebacker following the season-ending injury suffered by Joe Walker in last week's win over the Steelers.

Tulloch's looking forward to playing for Schwartz again this year. Says system is mostly the same with a few tweaks. pic.twitter.com/lw08ToO1Om

As for Schwartz, he sees Tulloch as a versatile linebacker who can help stuff the run while also being effective in coverage, something that has become more and more necessary given the evolution of NFL offenses in the decade since the two first worked together.

"He's a very experienced player," Schwartz said prior to Tuesday's practice, Tulloch's first with his new team. "He's played at a high level of production. [He] plays with a lot of spirit. He's heavy in the run game. He has natural leverage. That's a kind way of saying he's short; but he's really powerful. He understands blocking schemes, and he has good understanding of pass games. He's got a little bit of experience on the defense. I don't know if that means a whole lot. He's a good player that stands on his own. He's done it in different schemes."

Even though the 31-year-old hasn't been with a team all offseason since being released by the Lions, Schwartz has no concern about the veteran's fitness level, and that may be due to the following story he told about the one time he tried to give Tulloch a day off back in Detroit.

"When I was with him in Detroit, we tried to give him a vet day off in training camp and told the trainers, ‘Hey, Tully will be down today,’ and he came in my office mad as a hornet and was ready to practice.

So did he make his veteran linebacker sit out anyway? Not a chance. Tulloch ran out onto the field according to Schwartz and the coaching staff had to settle for just reducing the number of reps he took that day.

"I just love football," he said with a smile. "I think this is my 26th or 27th year playing football -- I started back in 1991 when I was about five years old -- and it's just a way of life for me. It's something I love to do. I have a passion for practice; I have a passion for the game. I play hard; I work hard. I take care of my body and do what I have to do. And, if I can, help younger guys become better pros and do what they've got to do to make this team better."

That's another reason Schwartz knows better than to worry about Tulloch: his age and experience. While that may work against some players on the field -- they could be more susceptible to injury -- the Eagles coordinator holds players with that kind of longevity in high regard.

"I have tremendous respect for guys that get 10 years in the NFL because you can't make 10 years on talent alone and you can't make 10 years by being a try-hard guy," he said. "You have to have a great combination of things. Also in 10 years, let's face it, you're going to be working with different coaching staff in 10 years. You have to have the ability to work in different schemes, whether you're an offensive player or defensive player.

"I'll bow down to guys that play 10 years in this league because that's tough business."

We're playing a kid's game. I'm 31 years old, so to be able to come out here and play a game, it's pretty fun.

But even with all that experience, Tulloch could be relegated to a backup role with the Eagles and may even see time on special teams, something he has done since his first two seasons in the league. Still, the Lions leading tackler from a year ago doesn't seem bothered by that fact.

Although, to hear Schwartz describe his everyone-brings-something-different-to-the-party philosophy, it sounds like a player's position on the depth chart won't really matter that much on a week-to-week, or even a play-to-play, basis.

"We're a merit-based defense," he said." We don't go in with a whole lot of preconceived notions. He's not here to replace anybody. He's here to add to our group. I think that as coaches, our job is to find out what guys do the best and what guys bring to the party.

"Everybody has something different they bring to the party, and we embrace that and try to find a role for all of those guys. But what role he's going to play is yet to be determined."

The final two preseason games will likely go a long way towards sorting out where Tulloch fits among the linebackers and if his presence causes the team to move a guy like Jordan Hicks to the outside. In other words, Schwartz wants to see just what he's bringing to the party after a few years apart.

In the meantime, the newest Eagle is going to try not to worry about things that are out of his control.