South Jersey native to compete in 'Jeopardy!' Tournament of Champions this week 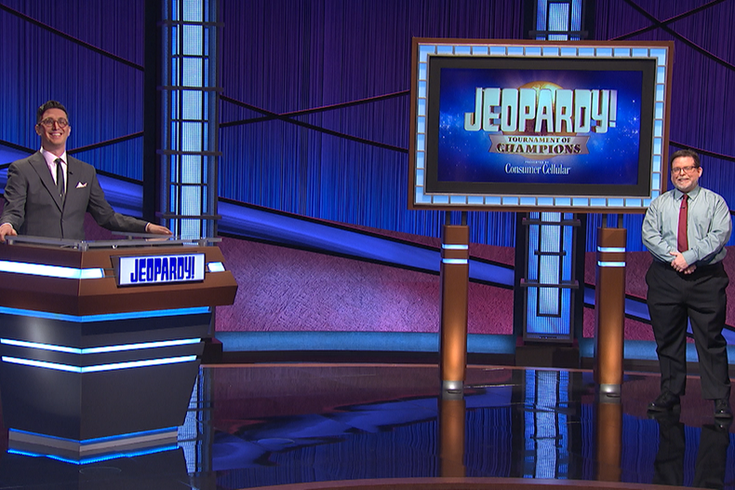 Kevin Walsh earned over $113,000 during his five-game winning streak on 'Jeopardy!' last October.

A five-day "Jeopardy!" champion from South Jersey is one of 15 recent contestants competing in the game show's Tournament of Champions this week.

Kevin Walsh, a story analyst originally from Williamstown, Gloucester County, will appear Thursday during the fourth of five quarterfinal matchups airing this week. Thursday's contest will air at 7 p.m. on 6ABC.

MORE: Bruce Springsteen and the E Street Band could be back on tour in 2022, Steven Van Zandt says

Walsh will be facing a STEM programming coordinator from Tulsa, Okla. and a choral music director from Grosse Point, Mich.

The former champion earned over $113,000 during his five-game winning streak on "Jeopardy!" last October, according to the game show.

Bilger won $32,405 during Monday's competition to advance to next week's semifinals. The Gettysburg College alum and West Virginia University student defeated a math teacher from Albuquerque, N.M. and a writer and stay-at-home mom from Hutto, Texas.

But Bilger's win was overshadowed by some criticism he received on social media from viewers who were not happy with his reactions to correctly answering two Daily Double clues. One of his reactions included pounding his chest after getting the correct answer to a clue that involved Pennsylvania.

#TFW you're about to nail a Daily Double! pic.twitter.com/mbfGADRPEG

Bilger took to Twitter to respond to his critics who thought he was being too cocky and overconfident.

Look, I get it. I had a ton of adrenaline flowing through my veins. I got a daily double on a piece of Pennsylvania history I’ve known since I was a child. I was playing better than I ever expected. Yes, I got pretty loud and excited,

I get that that’s not what many people want out of Jeopardy. I’d take back the comment on the second DD if I could. I was just in the moment and so excited to play because I’d been waiting for it for 2 years and had lots of pent-up energy. Not saying it’s a valid excuse, but yeah

See you next week through the TV, whether you like me or hate me.

Several of Bilger's fellow contestants, including Walsh, came out in support of him.

Chin up, man. You're a class act and every one of us who was in the tourney with you knows it. https://t.co/DXJGk4w1fY

After the quarterfinal round concludes this week, nine contestants will advance to the semifinals and finals next week.

Now in its 37th season, "Jeopardy!" is currently searching for a permanent host after the legendary Alex Trebek passed away in November 2020 at the age of 80, following a nearly two-year battle with pancreatic cancer. This week's event is the first "Jeopardy!" tournament without the show's longtime host.

A native of Philadelphia, Whitaker and the show donated $257,998 to Media Fellowship House, a nonprofit organization in Delaware County that focuses on creating programs, organizing coalitions and facilitating conversations that promote diversity and understanding through fair housing, education and racial justice advocacy work.

The donation, which equals the cumulative earnings of contestants who competed during Whitaker's two-week stint as guest host, will be used to secure and expand current fair housing programs.