Bruce Springsteen and the E Street Band could be back on tour in 2022, Steven Van Zandt says 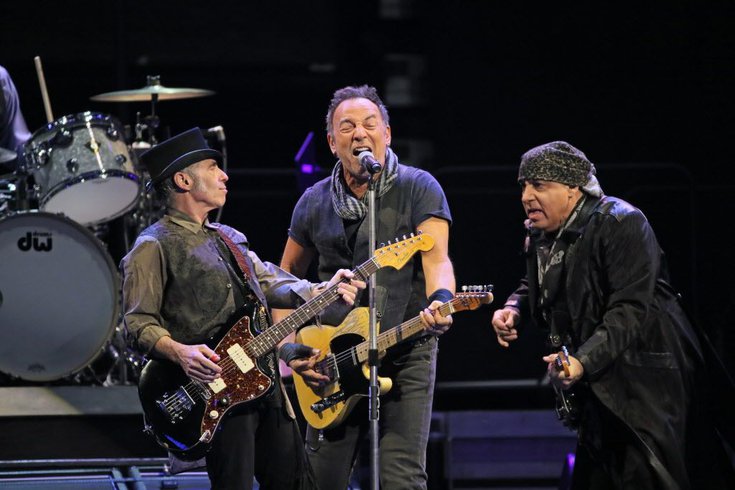 Bruce Springsteen and the E Street Band released their latest studio album, 'Letter to You,' this past October.

E Street Nation, keep your calendars clear in 2022 for a possible tour of Bruce Springsteen and the E Street Band.

The Jersey rock icons could be back on tour together for the first time in six years if circumstances surrounding the COVID-19 pandemic continue to improve, E Street Band member Steven Van Zandt said.

The musician/actor appeared Monday on the "Talking Sopranos" podcast, where he was asked by hosts Michael Imperioli and Steve Schirripa if he thought The Boss and the E Street Band would tour again.

"I think probably 2022," Van Zandt said. "That's what it feels like right now. 2021 is still a little up in the air with this new South African variant and all of this stupid sh*t. It's a little hard to predict what the hell is going to happen here. So I think 2022, I hope, is a safer bet."

Van Zandt originally joined the band in 1975 and was inducted into the Rock and Roll Hall of Fame in 2014 as a member of the E Street Band.

The Monmouth County native is also well-known for his role on "The Sopranos" as Silvio Dante, Tony Soprano's consigliere and right-hand man. Van Zandt acted alongside Imperioli and Schirripa on the crime drama that ran on HBO from 1999-2007.

Van Zandt also talked about how he got onto "The Sopranos," the origin story of his character, his musical career performing with Springsteen and the E Street Band and many other topics.

The E Street Band released their latest album, "Letter to You," this past October. It was Springsteen's 20th album of his career and the band's first studio album together since "High Hopes" in 2014. The album was recorded within four days in late 2019 at Bruce's home studio on his farm in Colts Neck, Monmouth County.

The album premiered at No. 1 on Billboard's Album Sales Chart and No. 2 on the Billboard New 200 Chart. Springsteen became the first artist ever to have Billboard chart-topping albums in each of the last six decades.

The only question that remained for fans was when the group would hit the road again and tour. Springsteen and the E Street Band last toured the United States five years ago during The River Tour 2016.

Since then, The Boss performed a Broadway concert residency called "Springsteen on Broadway." The band reunited this past December when it was the musical guest on an episode of "Saturday Night Live," performing two songs off the new album. Springsteen also performed at a concert celebrating President Joe Biden's inauguration in January.

Springsteen told Rolling Stone last September that he hoped to be back out on the road with the E Street Band in 2022 after the COVID-19 pandemic.

"My antenna tells me, at best, 2022," Springsteen said. "And I would consider the concert industry lucky if it happens then ... I’m going to consider myself lucky if I lose just a year of touring life. Once you hit 70, there’s a finite amount of tours and a finite amount of years that you have. And so you lose one or two, that’s not so great. Particularly because I feel the band is capable of playing at the very, very, very top, or better than, of its game right now. And I feel as vital as I’ve ever felt in my life ... It’s not being able to do something that is a fundamental life force, something I’ve lived for since I was 16 years old.”

But before a tour with the E Street Band happens, it sounds like fans will be getting a 21st studio album from Springsteen later this year.

During a Q&A session upon receiving the Woody Guthrie Award this past Thursday, Springsteen said that a new album is "coming out soon." He also said that it will be "largely set in the west," echoing many of the same themes he explored in his most recent solo album, "Western Stars," from 2019.