Jimmy Fallon mocks 'Mare of Easttown,' talks to P!nk about her new documentary 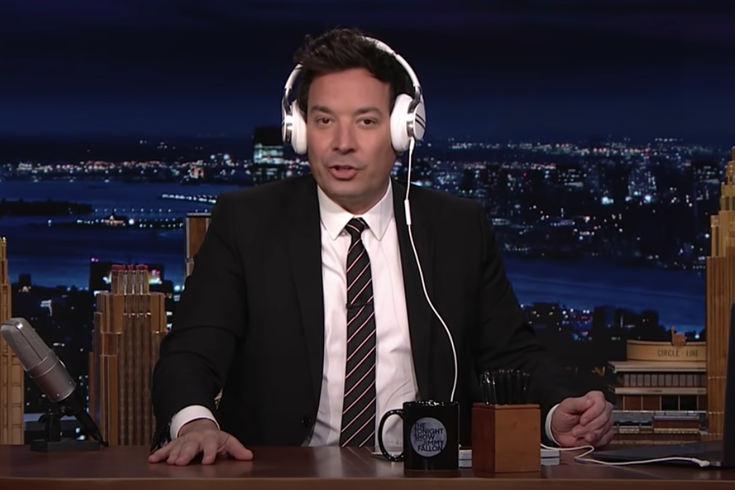 Jimmy Fallon has a recurring segment on 'The Tonight Show' where he plays clips from podcasts that aren't actually real.

The Philly region was well-represented on Monday's edition of "The Tonight Show," as host Jimmy Fallon poked fun at "Mare of Easttown" and chatted with P!nk about her new documentary debuting this Friday.

Fallon has a recurring segment on his show where he shares snippets from podcasts that don't actually exist. One of the fake podcasts was called "Cher of Easttown," which was teased as a scripted murder mystery starring Cher as a hard-boiled detective from a small town in Pennsylvania.

The clip features a detective's voice talking to Cher about the investigation, and the musician responding by singing lyrics from her 1998 hit song "Believe." Among her responses to the detective's voice included "I can't break through," "I really don't think I'm strong enough," and "Well I can't do that."

Other fictitious podcasts that Fallon featured included a relationship advice show with President Joe Biden, a look inside the pitch room for the Fast & Furious movie series and a conversation inside a Spirit Airlines cockpit.

"Mare of Easttown" was also recently spoofed on "Saturday Night Live" in a sketch called "Murdur Durdur," which made fun of the show and many other cultural references to the Philly region.

"Mare of Easttown" is a drama that focuses on Mare Sheehan, a suburban Philly detective played by British actress Kate Winslet, who is struggling to solve two local murder cases while enduring struggles in her personal life.

Furthering the show's Philly connection, P!nk was a guest on Monday, where she talked with Fallon about her new documentary premiering this Friday on Amazon Prime Video.

"P!nk: All I Know So Far" follows the Doylestown, Bucks County native behind the scenes on her Beautiful Trauma World Tour and how she balances life on the road as a performer, mom and wife. Her tour consisted of 156 shows in 18 countries during 2018 and 2019.

The documentary and subsequent live album is the first of the three-time Grammy Award-winner's career. The film was directed by Michael Gracey, who also helmed "The Greatest Showman."

"I listened to this set list all the way through and I just felt so good," P!nk said. "I think a lot of people still, after 20 years, think I'm just this man-hating, obnoxious, loud ... But we do so many fun covers, so many genres of music. It just makes me feel good."

P!nk also joked that the documentary will prove that "whatever stories my kids come up with about me" are not true.

The singer and songwriter is also slated to receive the Icon Award at the 2021 Billboard Music Awards in Los Angeles this weekend. Established in 2011, the award honors artists and their contributions to the music industry. Previous winners have included Garth Brooks, Stevie Wonder, Mariah Carey and Janet Jackson.

"It's amazing," P!nk said. "It's a huge honor. Anytime they give me eight minutes to perform, it's on. I'm probably looking forward to this performance more than I have looked forward to one in a very long time. I'm very nervous."

P!nk and Fallon also played a game of "Misname That Song," where they had to guess the name of a song from an incorrect version of its title.

The 2021 Billboard Music Awards air this Sunday at 8 p.m. on NBC. The ceremony will be hosted by Nick Jonas.