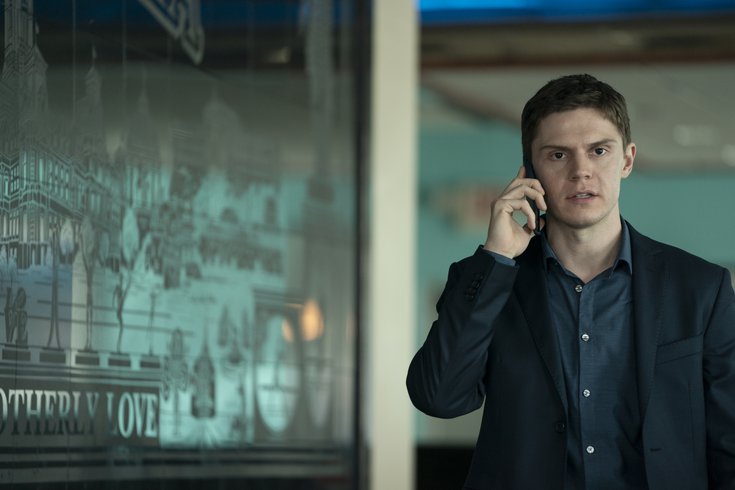 SPOILER ALERT: Do not read this article if you haven't already watched the first five episodes of HBO's "Mare of Easttown." Just stop what you're doing and go watch it.

In a series full of intriguing twists and turns, HBO's detective drama set in the Philadelphia region drama kicked into another gear in the fifth episode, "Illusions," which leaves an unsettling path ahead for the remaining two episodes.

Actor Evan Peters has played a fan-favorite role on the show as county detective Colin Zabel, who was called into Easttown to assist Kate Winslet's Mare Sheehan in the investigation of the murder of Erin McMenamin.

As an Easttown outsider in the show, Zabel's character injects a degree of optimism and cheer that no one else around him seems to possess. Even in Zabel's viral drunken rant from the fourth episode, his self-loathing pathos has something lovable about it.

All of that came to a screeching halt at the end of "Illusions," when Zabel is killed in a blink by a bullet to the head. He and Mare, who is still on administrative leave, got a tip to search for vans that matched the description of a suspect believed to be kidnapping young sex workers. When they appeared at the suspect's property – where two missing girls were locked away – the encounter escalated and Zabel was suddenly dead, just like that.

The build was one of the most stunning and emotionally wrenching turns in recent TV memory. Zabel's character arc led perfectly to the audience embracing his vulnerable mission to take bigger swings in life, only for him to end up killed in the midst of his best detective work.

In an interview with the New York Times, Peters discussed how he was "absolutely shocked" when he first read the script for the series, but he bought into the role fully based on the knowledge of what was to come. He compared it to a similar moment in Brad Pitt's acting career.

I was excited by the idea that that would happen, to craft this whole character and formulate this whole plot so it’s almost like we did it for that moment. It’s this interesting way to develop a character, knowing that he’s going to die in such a way.

To me, it felt very real, and it sort of speaks to the danger of being in this line of work. It reminded me of that moment in “Burn After Reading” where Brad Pitt gets shot in the forehead in the closet – which is sort of hilarious but also really shocking, and we wanted to have that sort of feeling once it happens.

Pitt played dopey gym employee Chad Feldheimer in "Burn After Reading," a character completely out of his depth in a botched extortion plot. The suddenness of his death is no less shocking, but in the context of a black comedy, it hit much differently. Zabel's death, against the backdrop of punishing drama, taps into a much heavier reserve of feelings – especially after viewers had seen him leave his mother's home earlier in the day.

Peters also spoke with the Times about filming in Philadelphia and how that helped him prepare for his role. Among all the characters in the show, Peters stands in a class of his own for his portrayal of a regular joe from the Philly area.

It was amazing shooting in Philly, first of all. It’s always amazing to be able to shoot where the story takes place, because you can go out, you can eat the food, you can meet the people, you can talk to them, you can learn the accent, you can feel the energy of the city and the towns and really get into that. I really don’t like shooting on stages because it just takes away the whole energy of the reality of it. I went to Reading Terminal Market and Tommy DiNic’s and got the cheese steaks and all sorts of local stuff, and visited it all and really tried to get into that.

Peters' effort on "Mare of Easttown" shows, and he'll be missed in the final two episodes as the series reaches its conclusion.