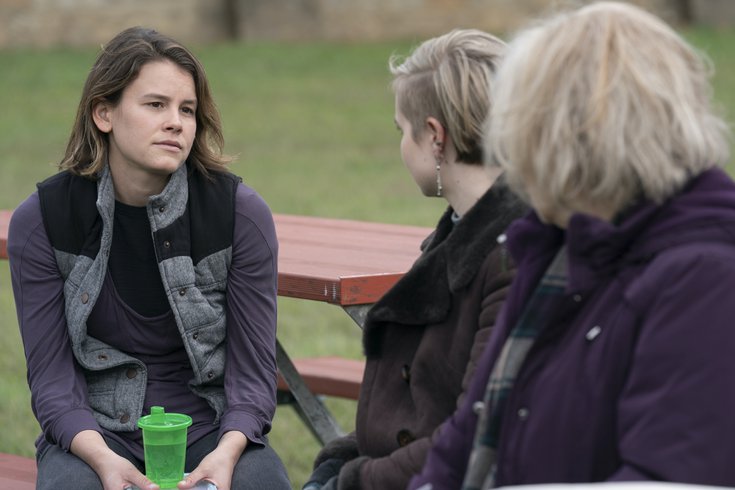 Actresses Sosie Bacon, Angourie Rice and Jean Smart appear in a scene from HBO's detective drama 'Mare of Easttown,' which was filmed in Philadelphia's western suburbs.

The intrigue and star power of HBO's "Mare of Easttown" have been on full display through the first two episodes of the detective drama. It's an engrossing character study of both the lead role played by Kate Winslet and the suburban Philadelphia community that surrounds an escalating murder mystery.

In the second episode of the series, Sosie Bacon made her first appearance in "Mare of Easttown," playing Carrie Layden, a recovering drug addict who is seeking full custody of her young son. She had the child with Kevin Sheehan, the son of Winslet's Mare Sheehan, who took his own life. It's a conflicting subplot for the audience and a terribly timed complication for Sheehan, who's busy trying to solve a murder.

Bacon, 29, is the daughter of Hollywood couple Kevin Bacon and Kyra Sedgwick. She spent the early part of her life visiting Philadelphia often to see her grandfather, the famed architect and urban planner Edmund Bacon, who's considered the "Father of Modern Philadelphia" and even has a mural at 13th and Drury streets.

Given her local roots, you might think that nailing the show's Delco accent would have come naturally. But in an appearance on "Preston & Steve" on 93.3 WMMR, Bacon said it was a big challenge that required a dialect coach and consultations with people in the Philly area. She was especially awed by Winslet's ability to capture the subtleties of speech in the accent.

"It was tough," Bacon said. "I mean, I'm so impressed by (Winslet's) accent because she's not even American and she did it better than anyone. It was hard, especially because my family is from Philly. Not only everyone I knew was going to judge the accent. I was also like, oh my God, my family, I'm going to let them down if I don't get this."

Her preparations involved a group text in which she would exchange voice recordings with friends of her cousin.

"When I started, I truly thought, I don't think I can do this," Bacon said.

The actress got her start at just 10 years old when she appeared in "Loverboy," a film directed by her father. She has since had numerous roles on the big screen and in television, including a part in Netflix's "13 Reasons Why" and "Narcos: Mexico."

Bacon didn't think she'd follow her parents into acting, admitting she was more worried about missing school than being in a movie when she was a kid. But as she got older, she found a love for the work and possessed the talent to keep earning new roles.

When she was cast for "Mare of Easttown," she said she was a bit star struck when she had her first dinner in Philadelphia with the cast, which includes Guy Pierce alongside Winslet.

"You definitely are honored to be cast in something alongside those people," Bacon said. "Maybe there's a brief moment of sort of nerves, especially meeting anybody who is the lead of your show that you're coming on as a recurring guest, you know? And obviously Kate Winslet's a little different. She's like a massive star. There's a moment of that and then once you sort of settle in and see how the other person works, you kind of realize that you have to come and deliver and work really hard."

Bacon said it was refreshing to spend time in Philadelphia, a city she hasn't visited often since her grandfather died when she was about 13 years old.

"Coming back to proper Philadelphia as an adult was so interesting for me because nothing had really brought me there since I was 13 or 14," Bacon said. "Being there and walking around the city and seeing (Edmund Bacon's) mural and sort of remembering the house was a really cool experience for me, especially because I had been so disconnected from it for so long."

Seeing Philly again reminded her why it's a unique place for any traveler to put on their list of places to visit.

"I really do love the city," Bacon said. "I think it's a special place and somewhere that people should really visit if they're going to the East Coast. It's so different from all the other major cities."

Bacon's character will appear throughout the remainder of the seven-episode series, which is filled with rich and complex relationships that feed into details surrounding the murder investigation.

As she watches the finished product, Bacon explained that she's seeing it more as a fan. The fact that filming was delayed by the coronavirus pandemic after starting in 2019 has only made it more entertaining to recall how the events unfold.

The second episode was filled with stunning moments and cliffhangers. Viewers can expect more of that.

"Let me tell you, the shocks keep coming," Bacon said. "It's not like it lets up."