Remembering Alex Trebek: A highlight of Philly-themed moments on ‘Jeopardy!’ 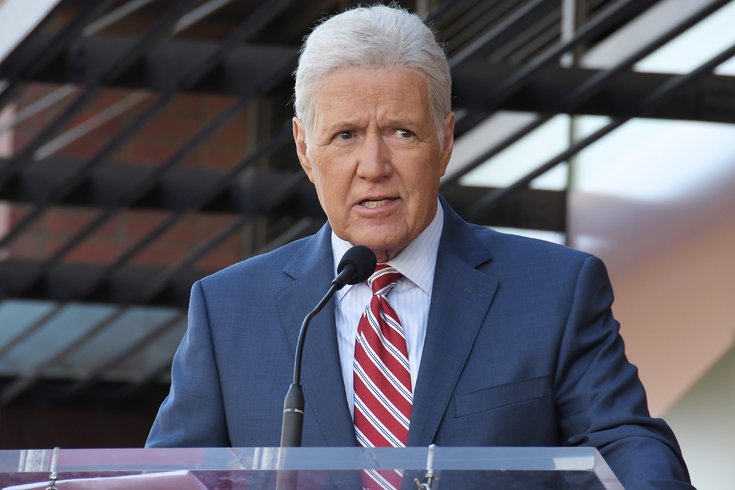 Longtime “Jeopardy!” game show host Alex Trebek passed away on Sunday at the age of 80 after a nearly two-year battle with pancreatic cancer.

Longtime “Jeopardy!” game show host Alex Trebek passed away on Sunday at the age of 80 after a nearly two-year battle with pancreatic cancer. The television personality had hosted “Jeopardy!” since 1984.

During his 36-year-run hosting the iconic show, Trebek had several iconic moments that invoked Philadelphia. As an honor and tribute to the late Trebek, here are some of the best Philly-themed moments over the years on “Jeopardy!”

Earlier this year, Philadelphia 76ers’ big man Joel Embiid and his nickname, “The Process,” was the subject of an answer in the show’s "Current Sports Nicknames" category. The clue read "Joel Embiid in 2019 won the trademark for this nickname of his that also describes the 76ers' strategy of improving the team."

A contestant named Paul – who was in the early lead with $4,200 – took a crack at it with the absolute confidence of someone who knew the correct answer.

Neither of Paul's competitors even offered responses before time expired and Trebek revealed the correct answer.

Embiid himself trolled Paul’s response by briefly changing his Twitter bio to reflect his new nickname.

“What is do a 180?” ⁰⁰This Joel Embiid-related Jeopardy answer is pure gold 💀

An Eagles reference during "Jeopardy! The Greatest of All Time"

The Eagles’ 41-33 win over the New England Patriots in Super Bowl LII has, not surprisingly, been referenced several times on “Jeopardy!”

Lancaster County native Brad Rutter was one of three contestants competing in "Jeopardy! The Greatest of All Time" tournament, which was held earlier this year.

Rutter, who earned a spot in the event as the show’s all-time leading money winner, decided to drop an Eagles reference during Final Jeopardy.

Having absolutely no clue what the corresponding question was to Trebek’s final clue, Rutter decided to have some fun and invoke his Eagles pride.

He wagered 4,133 points for his response – a reference to the final score of the Super Bowl – and below his ultimately incorrect response wrote, "Eagles Super Bowl LII Champs."

This all garnered a laugh from Trebek, as Rutter then said “Go Birds!” following the hilarious moment.

During the second game on the tournament's first night, “What is Philadelphia?” was the correct response to this clue read by Ryan Seacrest: “The legendary Dick Clark was an idol of mine growing up, we both started as D.J.s, me in Los Angeles & Dick in this city where he first hosted ‘American Bandstand.’”

No love for the Phillie Phanatic

Late last year, Trebek threw some shade at the Phillie Phanatic, saying that he wasn’t a fan of the Phillies’ mascot. Despite saying he had no issues with the Phillies, Trebek earned rebuke from the Philly faithful.

A nod to Nick Foles

Another instance when the Birds were honored on “Jeopardy!” came in June 2019 when former Eagles’ quarterback and Super Bowl MVP Nick Foles was an answer on the show.

Appearing during the show’s 2019 Teen Tournament, the category for the question was ESPY Winners worth $1,000.

“Once the backup, this Eagles QB won Best Championship Performance for his work in Super Bowl 52."

Ahhh.... is that a serious question?

In September 2019, Yardley Borough police officer Adam Clark was a “Jeopardy!” contestant and leading by $9,000 when he hit a Daily Double in the category "One-Word Book Titles."

"Is there a significance?" Trebek asked.

"It's the Eagles Super Bowl victory score," Clark said. Clark, however, did not provide the correct answer to the clue.

In February 2019, Gritty himself found his way into an answer on “Jeopardy!” The Flyers’ orange mascot was the correct response for a clue worth $800 in a category about almanacs.

“What is: it me Alex.” @GrittyNHL @Jeopardy #jeopardy #gritty pic.twitter.com/sIWrJJjMUw