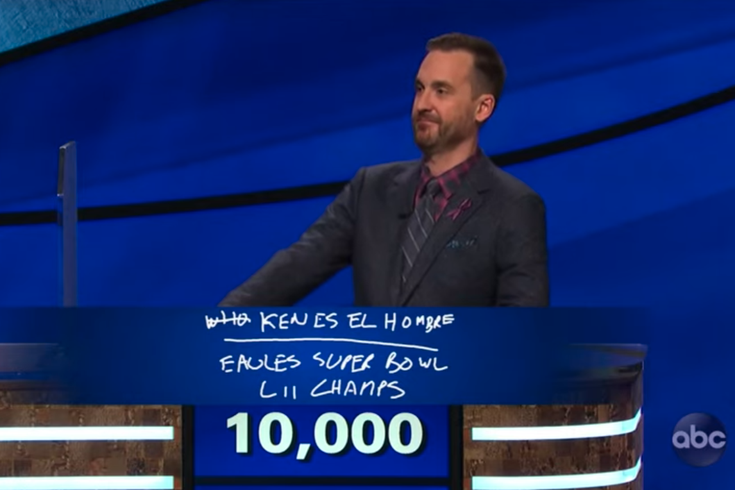 During the 'Jeopardy! The Greatest of All Time' tournament, contestant Brad Rutter showed his Philadelphia Eagles fandom with a shoutout to the team's victory in Super Bowl LII. Rutter is from Manheim, Lancaster County.

The Philadelphia Eagles’ 41-33 victory over the New England Patriots two years ago in Super Bowl LII just had to make an appearance during "Jeopardy! The Greatest of All Time" right? Of course it did.

And it came from none other than Lancaster County native Brad Rutter, who earned a spot in the GOAT tournament as the contestant who has won the most money in the history of "Jeopardy!" He is competing against the gameshow's other legends, Ken Jennings and James Holzhauer.

Rutter's shoutout to the Eagles championship occurred during Final Jeopardy. Host Alex Trebek revealed this answer: “These 2 foreign-born directors have each won 2 best director Oscars but none of their films has won Best Picture."

Rutter, a graduate of Manheim Township High School, had absolutely no clue what the corresponding question was, so he decided to have some fun and invoke his Eagles pride. He waged 4,133 points for his response – a reference to final score of the Super Bowl – and below his ultimately incorrect response wrote, "Eagles Super Bowl LII Champs."

This all garnered a laugh from Trebek, as Rutter then said “Go Birds!” following the hilarious moment.

For the record, none of the three contestants were correct in Final Jeopardy. The correct response was, Who are Ang Lee and Alfonso Cuaron?

This wasn’t the first time that the City of Brotherly Love came up during the tournament. During the second game on the tournament's first night, “What is Philadelphia?” was the correct response to this clue read by Ryan Seacrest: “The legendary Dick Clark was an idol of mine growing up, we both started as D.J.s, me in Los Angeles & Dick in this city where he first hosted ‘American Bandstand’”

Holzhauer buzzed in first, but before he answered, the professional sports gambler turned to Rutter and laughed at him for not getting the answer first.

"No need to rub it in," Brad said as the crowd laughed along.

Rutter has yet to win a match and will need a massive comeback to even have a shot at getting past Holzhauer and Jennings, who currently is just one win from taking home the title.

Thursday was the third night of competition among the three, with Jennings and Holzhauer having won the first two matches. The first player to win three matches will be crowned the champion of the tournament and win $1 million.

Instead of earning dollars, like in a regular "Jeopardy!", in this version of the show, the contestants earn points two-game matches, which are then added up for a total score at the end of the match.