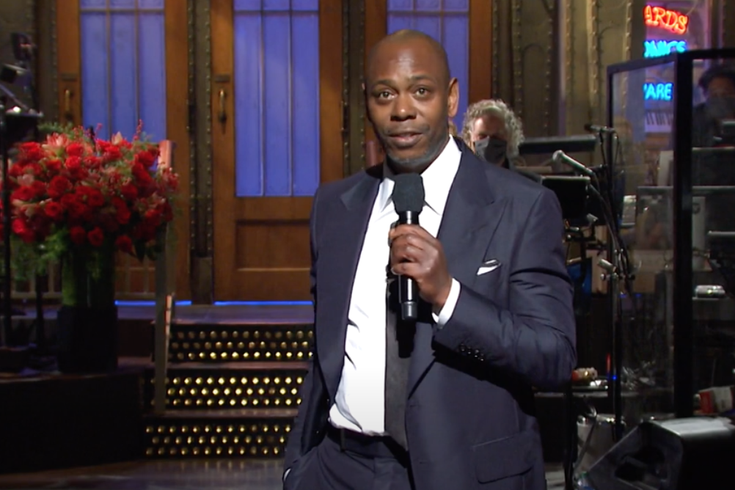 Dave Chappelle returned to host “Saturday Night Live,” for the second-time ever on Saturday, and it did not disappoint.

As many expected, this week’s episode of “Saturday Night Live” focused predominantly upon the 2020 presidential election between President Donald Trump and former Vice President Joe Biden — specifically on the Democratic presidential nominee winning the race on Saturday.

Celebrations that erupted across the country in the wake of the election results, including in Philly, earned a special shout-out during the “Weekend Update” segment on SNL this week.

After opening up by talking about Biden being elected the 46th President of the United States, cast member and “Weekend Update” co-host Colin Jost quickly pivoted to the celebrations that broke out across the country in the wake of Biden’s victory and Trump’s defeat.

Jost’s comments are then followed by a clip highlighting celebrations across the world, including in Philly, Washington, D.C., Atlanta, London, and Paris. The clip of Philly showed residents dancing in the streets outside of City Hall.


The cold open also highlighted Biden’s victory, as Jim Carrey returned to reprise his role as the president-elect. Maya Rudolph starred once again as Vice President-elect Kamala Harris, while Alec Baldwin played the role of a defeated Trump.

While celebrating Biden’s win and mocking Trump’s defeat, the opening segment also poked fun at CNN’s nonstop coverage of the election since Tuesday.


Dave Chappelle returned to host “Saturday Night Live” for the second-time ever on Saturday, and it did not disappoint. The comedian famously hosted the weekly comedy sketch show for the first time in November 2016 on the first Saturday following the presidential election that year.

Fittingly enough, SNL decided to bring Chappelle back to host the show on the Saturday following the 2020 presidential election, and he delivered.